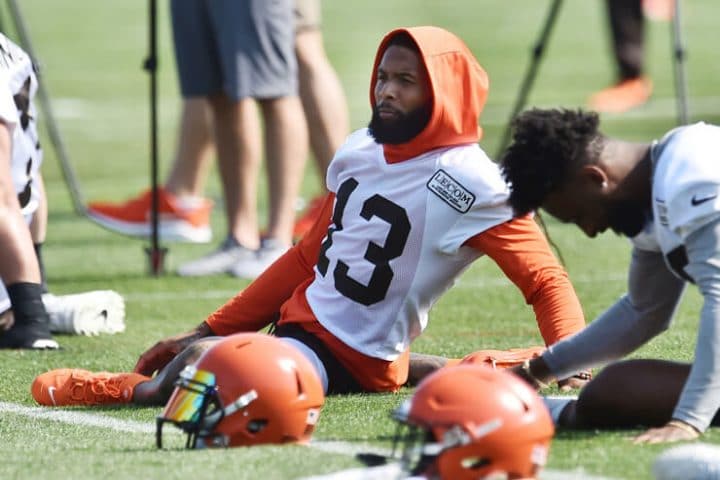 As of today, all 32 NFL teams have officially started training camp.

The first preseason game — the annual Hall of Fame Game, this year pitting the Denver Broncos against the Atlanta Falcons in a rematch of Super Bowl XXXIII (we’re nearing the point where every random matchup can be billed as a rematch of some Super Bowl) — is next Thursday, Aug. 1.

And where fantasy football talk goes, sports betting talk isn’t far behind — especially as we enter Year 2 of the NFL in a post-PASPA world.

While the NFL doesn’t go quite as topsy-turvy as the NBA now does in between seasons, there were plenty of major offseason moves and storylines generating headlines between February and now. Here we take a look at four of the biggest stories — and the betting implications.

On the heels of a “wow, look who doesn’t suck all of a sudden” 7-8-1 regular season, the Cleveland Browns made arguably the biggest splash during the offseason. And the odds seem to have overcompensated for it, with everyone who thought they were making a “sleeper” pick actually making a trendy, overwhelmingly public pick.

The Browns’ big move was to add Odell Beckham Jr. to their receiving corps, but they also acquired defensive end Olivier Vernon and suspended running back Kareem Hunt (apparently the Cleveland front office isn’t worried about karmic retribution). Combine those pieces with anticipated leaps for second-year QB Baker Mayfield and RB Nick Chubb, and you have a potentially elite offense and possibly the best Cleveland team since Bill Belichick and Vinny Testaverde led what would soon become the Baltimore Ravens to an 11-5 record and a playoff win 25 years ago.

That said, their Super Bowl odds are a bit out of whack. The Browns sit at +2000 at the Westgate Las Vegas SuperBook, +1600 at FanDuel, and +1400 at DraftKings, shorter in many cases than the Bears and Chargers, right around the same as the Colts.

To win the AFC North, the Browns are the favorites at +130, shorter odds than the Steelers and Ravens.

Interestingly, bettors have hammered the under on Cleveland’s win total of 9.5 games, driving it to a -150 price at FanDuel Sportsbook. So while some believe this is a true title contender, others expect the Browns to finish no more than a game or two better than last season.

QBs on the move

While there weren’t any truly elite quarterbacks changing scenery this offseason, quite a few teams will have new signal callers:

How much impact are any of them having on the odds? Foles, even if he has a low floor to go with his proven high ceiling, is a major upgrade over Blake Bortles in Jacksonville. The Jags’ win total is 7.5 after a 5-11 season. The Broncos are in a similar spot, with a win total of 7 after a 6-10 season.

Miami is facing less optimism. After a somewhat fluky 7-9 finish last year, the ’Phins have a win total of just 4.5 — and you can get as much as +125 on the under. Opinions vary, meanwhile, on how useful No. 1 draft pick Kyler Murray will be in Arizona, where the over/under is set at 5 wins. Murray is as high as +195 for Offensive Rookie of the Year, appealing if you think his athleticism will overcome his rookie growing pains often enough to impress voters.

The thing is, none of these teams are real contenders. Jacksonville and Denver are fringe contenders, at best, if everything clicks into place. The only Super Bowl contenders with a notable new QB on the roster are the LA Chargers, who added Tyrod Taylor as perhaps the best backup QB in the league. The fact that they have a competent replacement for Philip Rivers should injury strike makes their win total of 9.5 seem awfully low. And the bettors seem to know it, as the over is now priced at -160.

The era of the so-called “Killer Bs” in Pittsburgh, which began in 2013, is over. Actually, it ended last year, when RB Le’Veon Bell held out all season long. Bell signed with the New York Jets this offseason and WR Antonio Brown went to the soon-to-be-Las-Vegas-but-for-now-they’re-still-in-Oakland Raiders, leaving only QB Ben Roethlisberger on the Steelers.

How much impact will this have on any of the three teams now employing one of the Bs? The Raiders’ win total is a mere 6.5, and bettors are emptying their bank accounts on the under, moving it to as steep as a -180 price. On the other hand, the Jets’ total is just a tick higher at 7, which is way up from their 4-12 record in 2018, and suggests either Bell will make a difference, sophomore QB Sam Darnold will improve, or the sportsbooks just expect Jets fans to be irrationally optimistic.

The most interesting odds are on Pittsburgh, a steady contender for the last 15-plus years, but now somewhat of a longshot at +2200 to win the Super Bowl, +1200 to win the AFC, and +175 (behind the Browns) to win their division. They might not even miss Bell or Brown that much. Bell didn’t play last year anyway and James Conner’s performance indicated that no running back has all that much value over replacement anymore, and JuJu Smith-Schuster still gives Big Ben an elite target. The question mark is Roethlisberger himself. Fifteen seasons in the league and 501 sacks taken are bound to catch up with him. Especially if you believe the Browns and Ravens will be tough opponents, plus money on the under is appealing.

If you drafted Le’Veon Bell in season-long last year, you know this already: Beware the holdout in your fantasy league. The news is liable to change at any moment, but as of this writing, when Melvin Gordon, Ezekiel Elliott, or Michael Thomas will report to camp is a mystery.

The team odds for the Chargers, Cowboys, and Saints are unaffected for now. (And they might remain unaffected in LA even if Gordon pulls a Le’Veon, since Austin Ekeler is no slouch.) This is less about sports betting implications — although Elliott as the favorite to win the rushing title at just +325 odds sure feels like an absurd risk with not enough reward — and more about fantasy impact.

But still, these superstar players skipping part of camp, or all of camp, and maybe missing some real games, is a major story. Whether placing a futures bet or preparing for a fantasy draft, you’d be well served to (a) stay on top of the news, and (b) proceed with caution.