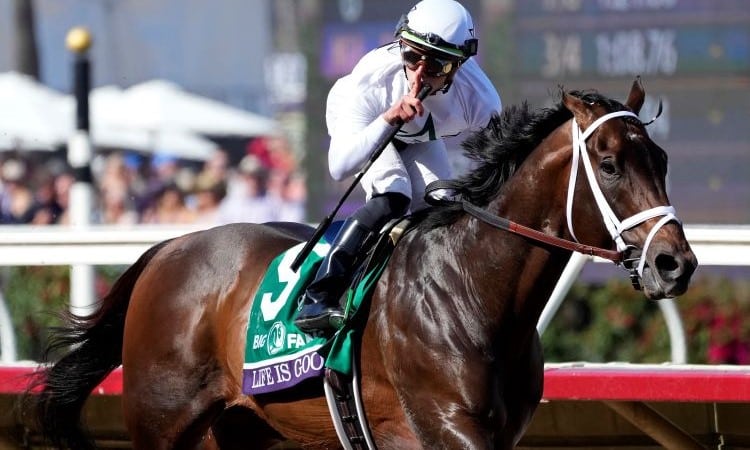 Life Is Good’s veneer of invincibility has receded somewhat from where it was in January, when he trounced reigning Horse of the Year Knicks Go by 3¼ lengths in the prestigious Pegasus World Cup Invitational.

The 4-year-old son of Into Mischief appeared to be on the way to another resounding victory in the $12 million Dubai World Cup until he uncharacteristically ran out of steam down the long straightaway at Meydan Racecourse. Suddenly, a two-length lead over Midnight Bourbon near the quarter pole turned into a defeat for the heavy favorite when three horses passed him in the deep stretch.

Life Is Good will attempt to avoid a similar fate on Saturday when he takes on Olympiad and Hot Rod Charlie in the Grade I Whitney Stakes at Saratoga Race Course. The $1 million stakes, contested at nine furlongs, is typically one of the nation’s leading races for older males each year. After the defeat in the 1¼ mile Dubai World Cup, Life Is Good cut back in distance in last month’s John A. Nerud, when he triumphed by five lengths at Belmont Park.

Breaking out of the No. 6 gate in the Whitney, the Todd Pletcher-trained Life Is Good has been installed as the 6/5 morning-line betting favorite.

“I don’t think post position was hugely important here,” Pletcher said during the Whitney draw earlier this week. “He’s typically a horse with a lot of natural speed so I’d imagine that he will be able to get to the first turn with good order.”

Life Is Good’s main competition should come from fellow 4-year-old Olympiad, which enters as the 2/1 second choice. Unbeaten in five starts this year, Olympiad is coming off a 2¼ length win over Americanrevolution in the Grade 2 Stephen Foster. Olympiad, who is trained by Bill Mott, recorded a career-best 111 Beyer speed figure in the victory at Churchill Downs. Olympiad, a son of Speightstown, has produced triple-digit Beyers in all five victories in 2022.

Olympiad is owned by Grandview Equine, a limited partnership launched by Robert Clay in 2018. Olympiad has notched wins at three tracks this year: Gulfstream Park, the Fair Grounds, and Churchill. Olympiad is also co-owned by LNJ Foxwoods and Cheyenne Stables.

“He’s taken a big step forward,” Clay told NYRA.com. “He loves the two turns and it seems like the longer he goes, the better. He sort of has it all, so now we’re running against the gorilla in the room and we’ll find out how good he is. I think he’ll run a good race, he’s training really well.”

Olympiad last suffered defeat in December when Irad Ortiz piloted him to a fourth-place finish in the Cigar Mile at Aqueduct. Since switching to Junior Alvarado at the start of the year, Mott has stuck with the veteran jockey. Alvarado has been aboard Olympiad on all five mounts this year.

“Junior has a great relationship with his horses and seems to understand them,” said Louis Rabaut, the co-host of The Horse Racing Happy Hour, on Thursday’s podcast, previewing The Whitney.

Hot Rod Charlie appeared ready to run as early as Wednesday when he stood up on his hind legs in the training area at Saratoga.

There are three other graded stakes races on Saturday’s card: the Grade 2 Glens Falls for 4-year-old-plus fillies and mares, the Grade I Test for 3-year-old fillies, and the Grade I Saratoga Derby, contested at a 1 3/16 miles on the turf. The Mott-trained War Like Goddess is the heavy 1/2 favorite in the Glens Falls, a 1½-mile race on the inner turf. War Like Goddess has won five of her last six starts, with the lone defeat coming in last year’s Breeders’ Cup Fillies and Mare Turf.

Horseplayers trying their hand at the Pick 6 will have to contend with another short price in the 7-furlong Test, where Matareya enters as the 2/5 favorite. Matareya is 4-for-4 on the year, with a 6¼ length victory in the Grade I Acorn in her last start. She will be challenged by two speed horses in Hot Peppers and Elm Drive.

This is by far the slowest Grade 1 Test field in recent memory. Only 2 horses have last-out Beyers above 80. Only one horse (Matareya) has ever broken 90.

Last month, Classic Causeway pulled off a major upset in winning the Grade I Belmont Derby at odds of 26/1. A 3-year-old son of Giant’s Causeway, Classic Causeway won his turf debut in wire-to-wire fashion. Classic Causeway is 8/1 in the Saratoga Derby, behind Annapolis (5/2) and a pair of European turf specialists in Nations Pride (7/2) and Stone Age (9/2).

Knicks Go romped in the Whitney last August prior to his win in the Breeders’ Cup Classic. Life Is Good, Olympiad, or Hot Rod Charlie could emerge as a top choice to win the Classic with a victory on Saturday.