Sports betting was in the spotlight on both network TV and pay cable Sunday night. How did CBS and Showtime do portraying it? 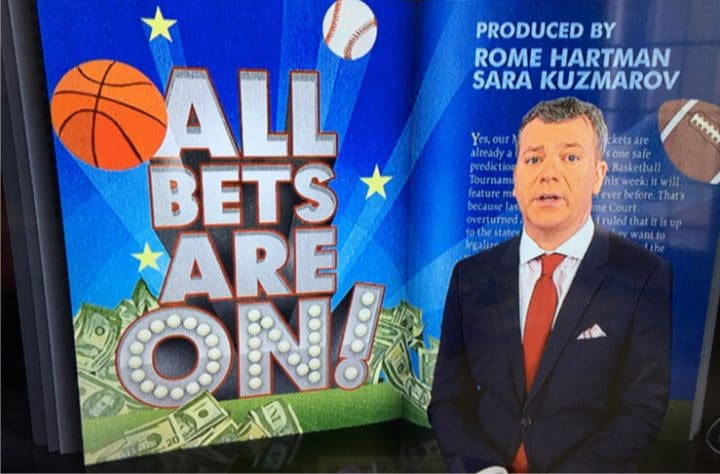 Ever since the U.S. Supreme Court opened the door last May for any state to offer Las Vegas-style legal sports betting, the industry has grown exponentially — and also grown to expect a national general-interest spotlight to shine on it.

And so it was that on Sunday night both CBS and Showtime offered features on the phenomenon.

How did they do? Goldilocks comes to mind. CBS’ 60 Minutes piece was too small, while Showtime — which is offering four one-hour segments on the topic in its series Action — may be going too big. But since there are three more shows to go, maybe it will turn out to be just right.

Still, industry members overall should not be too rattled by the coverage. This isn’t up there with former Pennsylvania Governor Ed Rendell (whose ex-wife coincidentally is one of the two Third Circuit judges whose ruling on sports betting was overturned by the Supreme Court last year) getting enraged on a 2011 60 Minutes segment about sports betting and calling their staff “simpletons.”

The 60 Minutes piece — the second of three segments for a show that ironically started more than an hour late on the East Coast thanks to the Duke-Central Florida March Madness drama — took the “20,000 foot” approach.

It’s interesting that NBA Commissioner Adam Silver — whose league was one of five sports organizations that spent six years suing New Jersey to try to stop the state from offering sports betting — comes off as legal sports betting’s best friend in the piece.

“The data is clear today,” Silver said. “If someone has a bet on a game — even a small bet — they are much more likely to engage in that match and to watch it for more minutes, and to follow the sport. There’s no doubt that there’s a business component to this.”

Asked how legal gambling makes a sport safer, Silver responded, “It decreases risk dramatically, because we have access to the betting information. I think when you have an underground business operating in the shadows, you have no idea what people are betting on your own events.”

Marshall University Athletic Director Mike Hamrick, whose West Virginia school is located in one of the eight legal sports betting states, replied, “I don’t buy that. It’s gambling. It can be handled to a certain extent, but nobody can sit here and tell you that they can deal with it and be 100% clean. They can’t.”

Hamrick, who claimed that most ADs feel the same way as he does, previously held that job at UNLV. He told his own version of the iconic “Bill Bradley story” — notice at courtside that fans don’t seem happy even though the home team won, then realize to your horror that there are many degenerates whose rooting was based on the point spread. (That’s how the Professional and Amateur Sports Protection Act of 1992 got passed in the first place.)

Cover up those injuries, fellas

With sports betting now legal in his state, Hamrick says he has instructed all medical athletic staff not to offer information on any player injuries: “Don’t tell anybody.”

Why that directive was not in place just as emphatically for many years, in a country where annual illegal sports betting estimates have ranged from $150 billion to $500 billion, should have been asked. It wasn’t.

Hamrick also offered this gem: “There’s people that will do what they need to do to make a buck at the expense of an 18- or 19-year-old kid.”

But 60 Minutes whiffed on that angle, too.

The Meadowlands Racetrack’s FanDuel Sportsbook got a cameo in the piece, as did William Hill US CEO Joe Asher (the only person to appear both on the 60 Minutes segment and Part One of the Showtime series).

60 Minutes did well to put on Florida State gaming law professor Ryan Rodenberg, who followed the New Jersey sports betting legal saga for almost as long as I did. He named unofficial lines of 15 states to have some form of sports betting by the end of the year, with more than 25 offering it in 2020. (Most of my colleagues and I at US Bets likely would bet the “under” on that, given “statehouse inertia.”)

Where 60 Minutes took the expansive view in a short amount of air time, Showtime took us inside the belly of the beast in its first of four hours on the topic.

Sure, there are cameos by Asher, Meadowlands Racetrack operator Jeff Gural, Monmouth Park’s Dennis Drazin, ex-New Jersey state senator Ray Lesniak, and longtime UNLV gaming expert David G. Schwartz (all but Gural have been guests on our Gamble On podcast, by the way). Ubiquitous sports business guy Darren Rovell, who has gravitated over to the sports gambling space, naturally gets his own cameo as well.

But the show is driven, appropriately, by gamblers.

There are brief and humorous interviews with numerous amateur bettors, and very enlightening shots of their thrills of victory and agonies of defeat.

The bulk of the show, though — and thus the barometer on whether industry insiders will find this episode appealing — was dedicated to tout “Vegas Dave” Oancea, handicapper Kelly “Kelly in Vegas” Stewart, and professional sports bettor Bill “Krack” Krackomberger.

Vegas Dave checks in at the 15-minute mark, and he is the most controversial of the three, at least based on feedback I have gotten before.

Showtime does not shy away from that. His very first comments are how “people only hate on winners” and how his goal is to “get to 10,000 haters.”

At least five minutes, though, are spent on Vegas Dave’s bragging, such as, “My winning percentages this year are well over 75%, which people cannot believe.”

Cousin Sal Iacono, a cousin of late-night talk show host Jimmy Kimmel, is one of them: “There are these touts who claim to win 70-75% of the time. And they are lying.”

More importantly, the show gets legendary broadcaster Brett Musburger — who now is on the sports gambling side of industry with VSiN — and iconic handicapper Jimmy Vaccaro to weigh in.

Ok, that issue seems to be exhausted. Yet minutes later, we are back with Vegas Dave as he visits his parents and explains all over again how wonderful he is. Hence my fear that filling four hours on this topic might be a challenge for Showtime.

More interesting is Kelly in Vegas. She’s a rare female in the sports betting industry, and the show chronicles her rise from bikini contest winner and casino bottle server to a brand with 37,000 Twitter followers.

Kelly clearly hasn’t made it as “big” as she wants just yet, but her efforts and her background made for a compelling segment, at least.

The other “star” is Krackomberger, who has a more modest 10,000 followers on Twitter. He’s a middle-aged, stocky bettor who looks like he’s straight out of a casting call for a The Sopranos sequel.

And sure enough, it turns out that Bill is from the little Jersey Shore town of Keyport.

Now? He lives in Vegas and claims that, “On any given weekend, I may have a million dollars in volume.”

That seems to suggest that he, well, has friends. Still, the scenes of he and his wife — who knew any of these people would have a spouse? — again generate human interest for a casual viewer.

Action included a really good sound bite from VSiN host Gil Alexander on the oddity of comments like those from that Marshall athletic director on the dangers of legal gambling in the U.S.: “If only there was a place where this has been thriving for decades. If only there was something we could point to and say, ‘Huh, this is working and it’s hugely profitable.’ It’s been here. Nevada. The whole time. We’ve been here the whole time, and now the rest of the country is going to get a little taste of all that.”

UCLA Professor of Psychiatry and sports gambling psychologist Timothy Fong provided a fresh angle: “Why do people gamble? What do people get out of it? The act of gambling is part of who we are as humans.”

Fong added that one patient of his put it this way: “Gambling is like eating, breathing, sleeping. It makes me feel alive.”

More Fong and less Vegas Dave in future episodes, please — which is possible if compulsive gambling issues get the attention they should in this series.

A few minutes was spent explaining to the audience what a point spread is, what a “vig” is. That suggests a hope that non-gamblers will watch an entire four-part series on gambling, which seems ambitious.

The episode ended on an intriguing note with another topic that 60 Minutes just didn’t have the time to address: What is the future for those illegal bookmakers?

One such Jersey bookie, whose face is shielded for obvious reasons, says he and his partners take in $40 million to $50 million a month in handle.

He adds, “Legalization hasn’t dented our business whatsoever. Who the f— wants to be driving up and down the Garden State Parkway for three hours so you can wait in line [to bet at a casino]? The other thing is, who wants to come into a casino with $275,000 in cash? I’m not worried.”