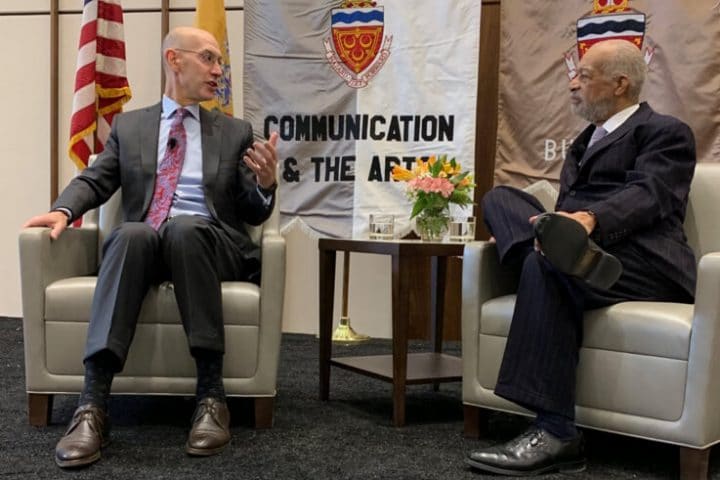 NBA Commissioner Adam Silver has been a consistent backer of the league’s stance that it should be compensated by newly legal sports betting operators.

First, Silver doesn’t just back the stance; he appears to have led the charge this whole time, given his comments.

Second, the league’s public relations pivot since last fall to try to avoid the much-mocked phrase “integrity fee” as much as possible hasn’t fazed Silver.

During a 20-minute segment on sports betting as part of the chat with Dr. Charles Grantham, the school’s director of the Center for Sports Management in the Stillman School of Business, Silver used the word “integrity” no fewer than 16 times.

Banter about the “i” word

Grantham — perhaps the most important figure in the history of the NBA’s Players Association — got things rolling by teasing Silver, with whom he has a longstanding professional relationship, about the phrase.

“Is our integrity for sale now?” Grantham asked. “What are we looking to do with this integrity fee?”

“No, our integrity is not for sale,” replied Silver, teasing Grantham that he must have been put up to the question by front-row spectator Bob Ley of ESPN investigative reporting fame.

Silver then noted that he isn’t necessarily in favor of sports betting. He just says that the internet “disrupted” the illegal sports gambling industry by moving from “the corner bar” to the consumer’s computer (and now smartphone). “What I have been saying for years … is just go to Google and type, ‘bet NBA,'” Silver said. “You see all sorts of sites.”

Silver added: “Getting back to integrity, I felt the best way to protect our integrity is to bring transparency to the industry, rather than all this illegal activity where we had no transparency whatsoever.”

The commissioner said that even before the U.S. Supreme Court ruling last May that wiped out a 26-year-old almost total ban on sports betting in the U.S., “I thought the best thing would be for Congress to act to repeal [the Professional and Amateur Sports Protection Act of 1992] and adopt federal regulations so that there would be a consistent framework across all 50 states. But now, you have a little bit of the Wild West out there.”

“I still haven’t given up, frankly, on Congress stepping in here, watching what’s unfolding state-by-state, and saying that we should have a consistent framework,” Silver said.

Does Silver know something the rest of us don’t? Most in in the legal sports betting industry aren’t expecting a divided Congress to suddenly join forces to pass a new law on sports betting — a topic that hardly is at the forefront of the minds of most federal lawmakers.

“The nuances of the laws being different in every state create an enormous burden on us — and it’s a race to the bottom, frankly,” said Silver, using a phrase popular with integrity fee backers to claim that states are liable to be more lax in their regulatory efforts in order to be more enticing to bettors from neighboring states.

Silver then moved to what clearly is the core of his position.

“I get it. I’ve been criticized by the gaming industry and others for calling for an integrity fee,” Silver said. “I step back and think, there’s something sort of a little bizarre to me that a legislature sits and says, ‘Alright, we have two private enterprises — the casino business over here and the sports leagues over here — and [the legislature] says, ‘We are going to require that the sports league give its intellectual property to this other private business, the casino. We, the state will take back a piece of the action [in taxes], and you, the league, get nothing.'”

That’s an interesting interpretation. The six state legislatures that have legalized sports betting in the past year (New Mexico’s tribal casinos went ahead with implementation without a need for state approval) each have passed laws that simply have ignored the pleas of the NBA, MLB, and PGA Tour making a collective pitch for some sort of mandated revenue share. They are silent on what that means for the leagues and the sports betting operators.

Silver acknowledged that the “marketplace” seems to be working fairly well. The NBA last summer signed a groundbreaking deal with MGM whereby the leagues provide official data, and numerous partnerships between gaming companies and teams or leagues have followed.

In fact, he noted that “if you’re the casino operator, you’re as invested in integrity as anyone. The last thing you want is for someone to get an edge over the house because they have some inside information and some funny business is going on.”

But Silver went back to what for him is a sticking point.

“This notion that, for us as a league, that the government steps in and says, ‘League, you must provide your content to those casino operators,’ and you get no say over the operation, you get no say over what they’re betting on,” Silver said. “Talk about integrity — I think the leagues should have a say in whether the first bet of the game could be who the first foul is on. These are things that are — [MLB Commissioner] Rob Manfred says, whether the first pitch is called a ball or a strike — things that are easy to manipulate, and where athletes might manipulate those things just because they’re goofing around.”

Silver acknowledged that seeking a cut of the handle — 0.25% of the total amount bet — is “a business opportunity.” (A bill introduced in Arkansas this week offers the leagues its 2018 push for 1% of the handle, four times more than what they now seek.)

“We will spend roughly $8 billion this year in creating our product. All in, that’s our expense line,” Silver said. “The idea that we spend all this money creating this product, and the legislature says to the casino, ‘Here, take this intellectual property … ‘”

So if you have been wondering why the NBA soldiers on, testifying at one statehouse after another on a quixotic and so far fruitless mission — well, the league’s commander-in-chief is emphatically leading the charge.