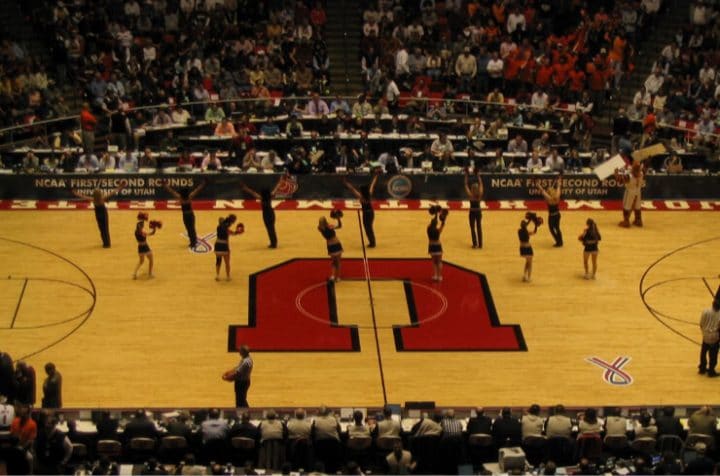 The American Gaming Association held a nationwide conference call on Monday to discuss results of its survey revealing that $8.5 billion will be risked on the NCAA men’s basketball “March Madness” tournament, with one of every five adult Americans placing a sports bet or entering a bracket pool.

It was noted that the most popular states for bracketeers are hoops hotbeds Kentucky — 28% — and Kansas — 25%. The University of Kentucky and the University of Kansas happen to be the two winningest schools in NCAA history, so that adds up.

But on a hunch, we asked AGA executives if there was any further data available. And there was.

In third place, with 24% of state residents planning to fill out a bracket is … Utah.

There’s no question that basketball is popular in the Beehive State. Utah, Utah State, Weber State, and Brigham Young have made plenty of NCAA tournament appearances over the years (and Utah Valley and Southern Utah are Division I programs as well).

But what makes the popularity of brackets surprising is that Utah is joined by Hawaii as the only states where all forms of gambling are illegal — even the lottery.

So while there are states where the technical legality of office pools for money is murky, Utah is not one of them. (We say “technical” because law enforcement doesn’t waste its time with office pools unless massive amounts of money are involved — which has been known to happen in New Jersey.)

Hawaii’s result was 16%, which is not among the highest percentages, but isn’t at the bottom either. Are March Madness brackets filling a hunger in those two states for residents to risk money on the result of sporting events?

States on the low end

Another surprise is which state came in last in the AGA survey: Mississippi, at 11%.

Yes, the first state in the South to offer legal sports betting last year ranks last in this poll. Ole Miss and Mississippi State again made the tournament this year, with Southern Miss and SWAC schools Jackson State, Alcorn State, and Mississippi Valley State missing out.

Of the seven other legal gambling states, only New Jersey — the state than ran the quixotic campaign that gave all states the option to legalize traditional sports betting — matched the national average of 20%.

Nine other states joined New Jersey at exactly 20%, with the bulk of them in “flyover country.” Along with New Mexico, West Coast states California and Oregon scored just 12%, with Texas and Georgia joining them.

An estimated 4.1 million people are expected to place a legal bet at a casino sportsbook or using a legal app, the AGA found. But another 5.2 million are expected to bet online at illegal offshore sites, with 2.4 million more betting illegally with a traditional bookie.

“These results indicate there’s still work to do to eradicate the vast illegal sports betting market in this country,” said AGA President Bill Miller in a statement.

And who do respondents nationwide like to prevail at the end of March Madness? No surprise there: Duke is favored by 29% of people, followed by Gonzaga (9%), North Carolina (8%), Kentucky (7%), and Virginia and Michigan (5%).

The fine print reads as follows:

“This survey was conducted on behalf of the AGA by Morning Consult between March 1-7, 2019, among a national sample of 11,002 adults. The interviews were conducted online, and the data were weighted to approximate a target sample of adults based on age, race/ethnicity, gender, educational attainment and region. The margin of error is +/- 1% and greater among subgroups. Bettors include those who expect to place a bet online, with a bookie, with a casino sportsbook, casually with a friend or participate in a bracket contest.”

Internet Gaming Fraudsters Beware – You Are Being Watched