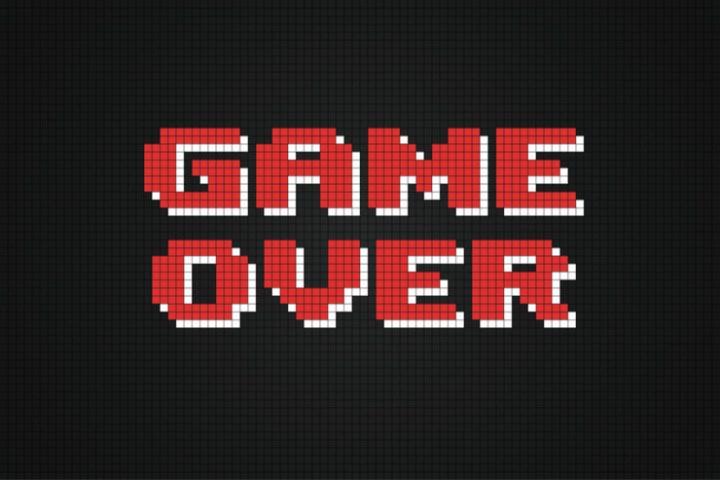 You knew it was coming. Once he’d won a few games on Jeopardy! with his discomforting style, once he’d crushed the record for single-day winnings (the first time), the James Holzhauer “haters” were sure to come out.

There’s a backlash to everything these days, especially people or things that are dominant or are different. And if both descriptions apply? Forget about it.

About a week after his historic Jeopardy! run began, Las Vegas-based professional sports bettor Holzhauer started getting media attention. Within a few more days, he was making podcast, radio, and TV appearances and getting mainstream coverage.

And then the hot-take culture reared its head. It was time to get contrarian.

A potpourri of negativity

On April 23, 13 victories in, Variety got it started with the first of the “he’s bad for Jeopardy!” declarations — in the headline, no less.

Then the former players — the ones who wished they’d been capable of winning millions of dollars and should really be thankful they didn’t have the unfortunate timing of running into the Holzhauer buzzsaw — started rising up in opposition. Charles Lane called him a “menace” in a much-read Washington Post article on April 29. Tom Nichols went on CNN on May 4 to declare, “Watching Jeopardy! now is about as interesting as putting a camera in the sportsbook room at Caesars Palace.” (Apparently Nichols didn’t catch the Showtime docu-series Action, which revealed having a camera in a sportsbook to be pretty damned interesting.)

And in response to a May 7 New York Times profile, the voice of the anti-Holzhauer crowd was effectively captured in this reader comment: 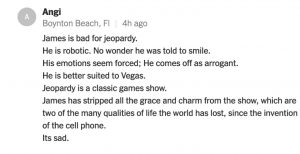 Here’s the thing: Dominance can be boring. I’m not going to tell anyone they’re wrong to find Holzhauer having games locked up by the midway point uninteresting. If you’re a “Jeopardy! purist” (apparently that’s a thing) and/or a person who likes drama in Final Jeopardy, I get the impulse to cancel your DVR season pass until Holzhauer’s run ends.

The problem is, it reveals a certain self-centeredness when you can’t separate “I don’t like this” from “nobody should like this” and “this is bad for Jeopardy!”

In Tiger Woods’ golfing prime, when he seemed to enter every Sunday with an insurmountable lead, my personal interest in watching golf was diminished. He was so good, so much better than the field, that he was sucking much of the drama out of the game, and I didn’t like it.

But at no point did I think he was “bad for golf.” That freezing cold take would have required some serious self-absorption.

Sure, whenever Holzhauer’s winning streak ends (assuming someone eventually does figure out how to beat him), Jeopardy! will experience a ratings dip. But it won’t drop to below where it was pre-Holzhauer. And he’ll return on a Tournament of Champions or maybe a historic one-off against Jennings and keep periodically reviving mainstream interest in the show.

Part of the objection to Holzhauer concerns his unorthodox playing style, how he has the audacity to use math to his advantage, how he’s bringing about some sort of robotic/sabermetric age of Jeopardy! He’s “ruining” the game show the same way defensive shifts are “ruining” baseball and the three-point shot has “ruined” basketball and the neutral-zone trap “ruined” hockey.

All games evolve. Sometimes the rules change to promote entertainment. Sometimes they don’t. Jeopardy! already made one new rule on account of Holzhauer, prohibiting players from giving shoutouts in the extra space where they write their Final Jeopardy answers. Will the show adjust other rules after he’s gone?

How about a cap on how big you can bet on Daily Doubles? (That would be a mistake, in my opinion, since “Double” is in the name and Holzhauer’s huge gambles make the game more entertaining and dramatic in the moment, not less.)

Maybe a rule that you must select the lower-value clues first? It’s not like Holzhauer is the first player ever to defy that unwritten rule, but that’s a tweak the producers of the show could consider.

Whatever happens going forward, much of this complaining stems from a resistance to change. It’s natural. It’s understandable. But if we were consistently anti-innovation, contestants would be riding out to Studio 3 in Burbank, Calif., via horse and buggy. Not to mention, very few players in the future will have the extraordinary skill set to pull off what Holzhauer is doing; his combination of trivia knowledge, nerves of steel, willingness to gamble, buzzer reflexes, and single-minded focus might never be seen again.

What does James have to say about all this?

Since Holzhauer joined Twitter last month (he’s now at 36.5k followers and somehow still doesn’t have a blue checkmark), he’s used the forum to reveal a sense of humor about the criticism.

“It doesn’t bother me,” he told US Bets this week, “but I also find it cathartic to sarcastically call out some of the haters. I’m definitely not aiming for a 100% approval rating.”

Does he feel bad at all about making Jeopardy! less entertaining for some vocal “purists”?

“No. It’s not my job to be an entertainer,” Holzhauer said. “I think the upset purists are more than counterbalanced by increased interest in Jeopardy!”

And one thing is for sure: The reaction, positive or negative, won’t affect Holzhauer’s playing style in the future.

“I won’t play any differently to appease anyone,” he insisted, “but I don’t feel any extra motivation to spite the haters. They’ve allegedly stopped watching anyway!”

If they stopped watching before April 29, they missed Holzhauer’s close shave against the excellent Adam Levin, who nailed a dramatic Double Jeopardy-round Daily Double, risking $12k of his $13k and making a game of it, forcing Holzhauer to sweat out the Final Jeopardy question and ultimately prevail by $18.

Because there so often isn’t drama when Holzhauer plays, the rare moments of legit competition become that much more thrilling. It’s a trade-off.

And the ratings make clear that it’s one people are willing to make.

You don’t have to like James Holzhauer or the way he plays Jeopardy! It’s fine to be all out on Mr. All In.

But there’s no sense in making sweeping statements about him being bad for the game. Those thoughts are as unoriginal as they are inaccurate.

Is MGM Betting On A U.S. Online Poker Comeback?

‘Jeopardy!’ James Cruises To Semifinals In Quest For ‘Tournament Of Champions’ Throne