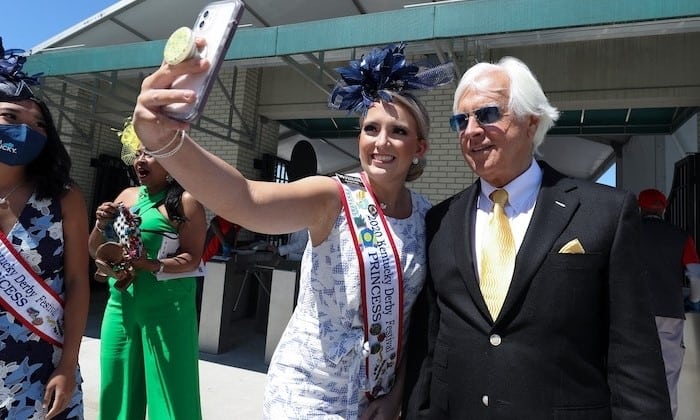 Attorneys for Bob Baffert on Tuesday filed a lawsuit to contest Churchill Downs Inc.’s two-year suspension of the embattled trainer, with the Kentucky Derby just two months away.

The lawsuit, which was filed in the U.S. District Court for the Western District of Kentucky and also names CDI CEO Bill Carstanjen and CDI board chairman Alex Rankin as defendants,  contends that Baffert’s suspension — which was levied in June, after the Baffert-trained Medina Spirit tested positive for the corticosteroid betamethasone in the 2021 Kentucky Derby — deprives the Hall-of-Fame trainer of his “right to due process under the Fourteenth Amendment and of his right to participate in [horse racing] in Kentucky under Kentucky law.”

On Feb. 21, the KHRC disqualified the Kentucky Derby’s 2021 winner, Medina Spirit, from the race for the betamethasone positive and suspended Baffert for 90 days. That suspension is scheduled to begin March 8, and KHRC executive director Marc Guilfoil denied Baffert’s request for a stay of the suspension while the sanction is appealed.

But that decision is also being contested in court.

“The notion that Churchill Downs, which is not even tasked with regulating [horse racing] in Kentucky, could unilaterally ban a trainer by an edict coupled in a press release without having the facts or any semblance of due process should arouse outrage in any fair-minded person,” Baffert’s attorney, Clark Brewster, said in a press release. “The facts are clear, and Churchill Downs knows them, but refuses to acknowledge them. … And Churchill Downs and Mr. Carstanjen knew full well that imposing its suspension, based on zero factual or legal support, would give illegitimate credibility to a false narrative about Bob, creating pressure on the Kentucky Race Horsing Commission stewards to take action against him, too.”

Brewster added that he looks forward to ensuring “[Baffert] can get back to the winner’s circle in May,” in reference to the Kentucky Derby, which is traditionally held on the first Saturday in May.

CDI’s statement in response to the lawsuit did not pull punches.

“The lawsuit filed by Bob Baffert is disappointing, but certainly not surprising,” the statement read. “His claims are meritless and consistent with his pattern of failed drug tests, denials, excuses, and attempts to blame others and identify loopholes in order to avoid taking responsibility for his actions.

“These actions have harmed the reputations of the Kentucky Derby, Churchill Downs and the entire thoroughbred racing industry. Churchill Downs will fight this baseless lawsuit and defend our company’s rights. What’s at stake here is the integrity of our races, the safety of horses, and the trust of the millions of fans and bettors who join us every year on the first Saturday in May.”

Other claims included in the lawsuit are that Kentucky regulations only cover betamethasone injected into horses and not topical treatments. To this end, Baffert contends that substance made its way into Medina Spirit through an ointment called “Otomax.”

An indication of strategy?

There is also a hint in the lawsuit that Baffert’s lawyers could use a similar strategy to that which they deployed during disciplinary hearings with the New York Racing Association. The NYRA case has yet to be decided, but during the proceedings, Baffert’s lawyer, Craig Robertson, accused members of the NYRA board of having a “personal vendetta and want to eliminate a competitor.”

The lawsuit against CDI points out that Rankin, as an owner, races horses at CDI tracks and is the founder and president of Upson Downs Farm. The lawsuit states, “Horses bred at Upson Downs (in addition to other horses in which other officers, directors, and/or agents of CDI have a beneficial interest) compete with the progeny of Baffert-trained horses at yearling sales nationally.”

Medina Spirit died in December and his necropsy report was released Feb. 11 by the California Horse Racing Board. That report said Medina Spirit’s cause of death was  “undetermined,” but that “sudden cardiorespiratory arrest/cardiac failure [is] suspected.”