Bally’s Makes Its Pitch For Chicago Casino At Tribune Site 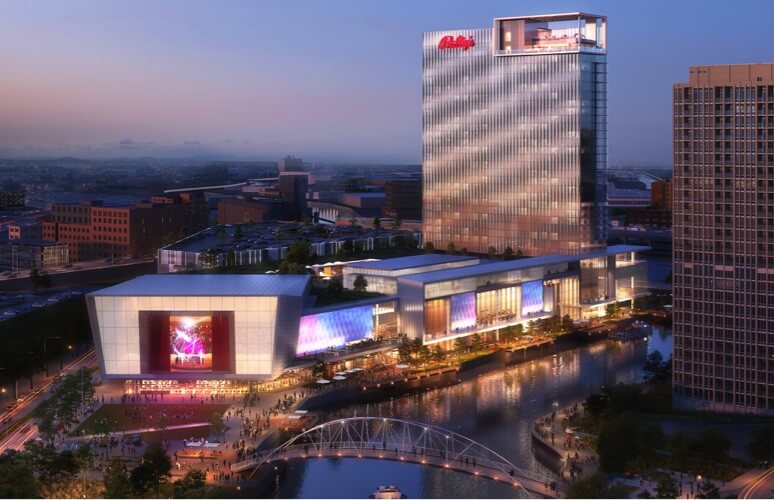 Bally’s Chairman Soo Kim promised to find ways to alleviate traffic concerns, integrate into the River West community, and showcase the “best of Chicago” on Wednesday evening in leading the pitch to local residents for why Bally’s should be the operator Mayor Lori Lightfoot chooses for the highly sought downtown casino license.

Bally’s was one of three finalists picked last month by Lightfoot and the second group to make a presentation to Chicago-area residents in as many days. Kim and his team presented their plan at the Tribune publishing plant, where both the temporary and permanent casino would be built if Bally’s is selected and approved by the Illinois Gaming Board. Hard Rock made its pitch Tuesday evening at Harold Washington Library, and Rush Street will discuss its Rivers 78 proposal in the South Loop area near its proposed site Thursday evening.

“Our site is reductive and gives the most amount of flexibility in terms of how we move the traffic around the entire 30 acres,” Kim told a room that was filled to capacity, referring to the plot of land in the planned development that was originally approved by the city for 9 million square feet of use in 2018. “Our plans are to connect to Halsted and Jefferson, or not, based on the conversations we’re going to have here.

“The connections to the site moving people in, around, and out of the site, these are the things that we actually have the most flexibility to deliver. The casino only takes up less than 10 acres of the 30 that we have control over. Any other developer would be maximizing every ounce of that 30 acres. We’re not a real estate development company and we have the flexibility to address the other 20 acres in a manner most conducive to what the community wants.”

The city is projecting annual tax revenue of approximately $200 million from the downtown casino, with that money earmarked by Illinois state law to address funding shortfalls in Chicago’s fire and police pension plans. The state could also receive approximately $200 million annually in tax revenue, which would nearly equal the $248.7 million in taxes generated through all 11 of the state’s venues in 2021, with their $1.2 billion in gaming revenue.

Congestion concerns at Chicago and Halsted

The sites of the Bally’s Tribune proposal is the closest to downtown proper, and the River West area where it is proposing to build already sees significant traffic at the Chicago Avenue and Halsted Avenue intersections. It is also the only one of the three finalists with plans to build on the north side of the city.

The city has already planned for some improvements in that area, most notably a project to widen the Chicago Avenue bridge in the third quarter of 2023 and the resurfacing of Halsted Street. Bally’s has also proposed modifications to the traffic signals at the intersection of Chicago, Ogden, and Milwaukee Avenues, as well as the creation of Jefferson Street.

“As a result of all those meetings with the neighbors and all those meetings with the city, we came up with 30 improvements, over $10 million of off-site improvements,” Doron said. “New traffic signals … modernization of existing signals with new technology to add better timing coordination and pedestrian countdowns — lot of this came from the city of Chicago. A lot of the systems in there were old, outdated … and at the very busy corner of Chicago, Ogden, and Milwaukee. That idea for upgrades, that’s a tough intersection that had been kicking around for years.

“Our goal is to listen more but to accommodate all modes of traffic.”

Bally’s Corporation pitched its plan for a sprawling gambling complex on a 30-acre plot near Halsted Street and Chicago Avenue, which is currently home to the Chicago Tribune’s printing plant — and the source of traffic headaches on a daily basis. https://t.co/M1JBa4UX2g

Two of the three videos Bally’s showed during its presentation promoted minority investment participation with relation to both contracting for the estimated 9,000 overall construction jobs projected for both the temporary and permanent casinos, as well as the 2,000 jobs tied to casino operations. Bally’s set a goal of 60% minority hiring for the casino — a percentage it says would be reflective of the diversity in the community — and would have entry-level salaries starting at $50,000 per year plus benefits and tuition reimbursement.

Kim has targeted a 25% minority ownership goal, above the 20% mandated by the city, and pointed out four of the nine directors on Bally’s board are women and/or minorities. One point not discussed by Kim nor brought up during a question-and-answer period was the adjustment in Bally’s proposal after reported pressure from the city to let minority owners retain their stake beyond six years, after Bally’s originally had a call option to buy out those shareholders.

Kevin Hicks, one of the minority investors, said he felt Bally’s put together the right balance of generating revenue and investing in workforce development to help minority communities both during the casino’s construction and post-construction with regards to supplier contracts. Hicks also suggested the Bally’s bid had more transparency and inclusivity than the other proposals.

“When casino gambling was officially approved and the opportunity to invest was presented, I was extremely interested,” Hicks explained, noting he has family members on the city’s police force. “Having grown up in a community where there [is a] high percentage of low-wage jobs, I was really interested in a proposal that was going to invest in hospitality training and also partner with workforce development organizations. … We have an opportunity to create jobs that [are] living wage jobs at all levels, not just entry level, mid-level or executive level even.

“In many of these occasions and particularly at these town halls, there are circumstances where there are lines drawn in an ‘us versus them’ mentality,” he added. “I saw that with Bally’s, that it wasn’t a line drawn of us against them, it was them drawing a circle of inclusion taking in what parties had to contribute and taking it in account with their bid.”

Kim also talked of offering a crowdfunding fundraising system in which people can make an equity investment of as little as $250, something Bally’s VP of Corporate Development Chris Jewett said offered an opportunity for “generational wealth.” The crowdfunding concept had some similarities to what Loop Capital CEO Jim Reynolds discussed during Hard Rock’s presentation.

Trying to win over a skeptical neighborhood

The question-and-answer session mainly circled back to traffic concerns and safety issues, with some residents noting the crime directly around the casino would not be as much of an issue as the potential for crime in surrounding areas. Many residents who asked questions said they were doing so on behalf of their condominium associations.

Kim again pointed out that the casino proposal was using less space than what the development provided and also committed to not removing any affordable housing on the parcel. He also stressed that Bally’s will be flexible with regards to the project as it moves forward, understanding the importance of investment at the local level.

“We are continuing to evolve this program so that our current thinking is to take away a little bit of ‘Hey, here are some rich minorities that are going to invest, they’re going to make more money, great.’ We have our mix of interesting community folks and celebrities and whatnot, but actually we’ve started to de-emphasize that and figure out a way someone can put $1,000 down and have $100,000 in equity in the project.

“It’s an opportunity for us to take that capital, which is a sign of good faith, to lever it to a place where it matters to be meaningful for the casino to be successful. It would be real life-altering money and we think it’s a good thing that should be shared.”

The $248.7 million in tax revenue from casino gaming in 2021 does not include sports wagering, which provided an additional $78.8 million. That combined total was still less than half the $717.7 million in tax receipts generated by the nearly 42,000 video gaming terminals (VGTs) statewide last year.

Photo courtesy of Bally’s RFP submitted to the City of Chicago. Chris Altruda is a Chicago resident and lives closest to the Bally’s Tribune site of the three proposals for the downtown casino.