What kind of casino can you build for $1.6 billion? Bally's hopes to find out 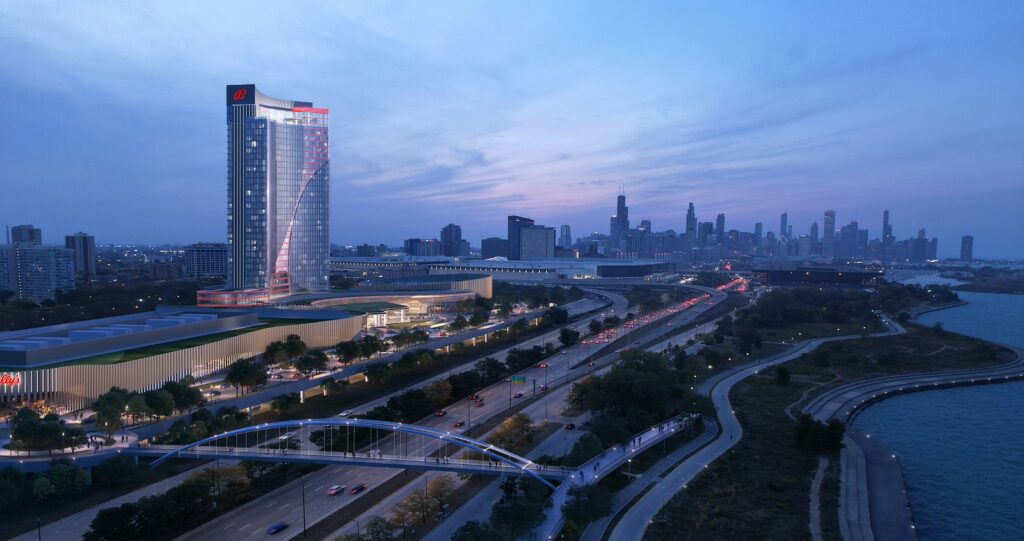 Offering the chance to develop what it calls “an underutilized site into a source of tax revenue for the city,” one of Bally’s two proposed locations for the casino license awarded to downtown Chicago would turn the McCormick Place Truck Marshaling Yard into the Windy City’s premier gaming destination.

Bally’s, along with Rush Street Gaming and Hard Rock International, comprise the three companies that presented five proposals to the city for a downtown casino. If the process remains true to the projected timeline — no easy feat given the task of building a gaming venue in the third-largest city in the United States — the casino would open by 2025 and is expected to generate between $160 and $200 million in annual taxes and fees that the city of Chicago would allocate to police and fire department funding.

Bally’s submitted two proposals to the city for consideration, with the truck yard location near the Bronzeville Lakefront neighborhood part of an area considered prime for a casino just south of “The Loop.” All three bidders, in fact, have made proposals that incorporate McCormick Plaza, an area with a notable preexisting footprint as a convention hub.

Illinois currently has 10 casinos in operation, including one run by Bally’s in Rock Island in the northwest part of the state near Quad Cities. The downtown Chicago area is one of six venues the Illinois Gaming Board will issue new licenses for as part of a massive gaming expansion bill signed into law by Gov. JB Pritzker in June 2019 that also legalized sports wagering.

What can you build with $1.6 billion?

We are excited to announce our proposal to develop and operate Bally’s Chicago. We are committed to building a flagship property that offers a world-class entertainment destination resort built, owned and operated by Chicagoans. More at: https://t.co/V0fcoxAcX8 . #BallysForChi pic.twitter.com/jKB8fSyqox

The total projected cost of each proposal Bally’s submitted to the city will be at least $1.6 billion, but its full development will come in two phases. That projected cost does not include Bally’s making an incentive payment of $50 million to the city up front if the McCormick Place location is awarded the casino license. The second phase is also contingent on the first phase — which projects to cost $1 billion — reaching a revenue benchmark described in the executive summary as “achieving a sustainable 20% return on initial investment.”

That initial buildout calls for the permanent casino to have 2,700 slots and 95 table games in a space that allows for expansion to 4,000 gaming positions permitted by the downtown license. The space would have five food and beverage venues and a luxury hotel containing 100 suites. There would also be an outdoor music venue with seating capacity for up to 1,000 and an outdoor green space.

Should that sustainable return on investment be reached, the $600 million second phase would add 700 slot machines and 78 more table games, raising those totals to 3,400 and 173, respectively. Bally’s would also build a 400-room hotel tower with a rooftop pool and bar, a 3,000-seat entertainment venue, a 20,000-square-foot exhibition center that would include a Chicago-themed sports museum, and an additional five food and beverage venues — one of which would be a high-end steakhouse designed by local James Beard-nominated restaurateur Erick Williams.

Bally’s did not offer any specific plans regarding the allocation of gaming positions at O’Hare and Midway airports, which would be allowed to the downtown license holder. But Bally’s did note in its executive summary that it plans “to leverage the airport visitation by utilizing a portion of the available 4,000 gaming positions allocated to the Project and will work with the City to right-size the number of positions to be placed at O’Hare and Midway airports. We believe that, properly marketed, the airport visitation will capture incremental customers for Bally’s Chicago and generate additional tax revenue for the City.”

Bally’s also has plans to build a temporary casino by retrofitting the old Chicago Tribune publishing plant in River West to provide the city some tax revenue while the permanent venue is being constructed. The temporary casino would have 500 slots and 25 table games.

Incorporating the city into a casino

In addition to the tax revenue generated from casino gaming, the winning bid for the downtown license must also have a casino that offers employment with competitive wages and reflects the socioeconomic diversity of the city, while offering the potential to move the area forward. Bally’s stated in its executive summary that Chicago’s minority investors will have a 25% ownership stake and include “philanthropists, business  owners, sports stars, celebrities, and everyday Chicagoans from the Black and Latinx communities, as well as other ethnic and gender representation.”

Bally’s also hopes to notably exceed the city’s requirements for Minority Business Enterprise (MBE) and Women-Owned Business Enterprise (WBE) representation, looking to make commitments of 36% for MBE and 10% for WBE. The city is requiring 26% and 6% as the respective thresholds to reach. Bally’s also has goals of 45% for both minority and women hiring goals, as well as 5% for both veterans and persons with disabilities.

Furthermore, Bally’s is teaming with the Chicago Community Builder’s Collective and the Chicago-based Target Group to help the procurement process across a wide array of areas, including subcontractors, vendors, suppliers, and consultants.

There is some local opposition to the truck yard being the site of the casino, led by Alderperson Sophia King. Her 4th Ward includes the Bronzeville Lakefront, and the proposed casino site is adjacent to an area recently approved by the Chicago City Council to undergo a $4 billion redevelopment that would include 4,800 homes, offices, research facilities, and stores on the former Michael Reese Hospital site.

“While I am open to the goals of using this new revenue stream to help Chicago deal with its overwhelming fiscal responsibilities, it should not be done at the expense of our communities, especially marginalized ones,” King wrote in her weekly newsletter to her constituents earlier this month. “Since the beginning of this process, the community has been clear in their desire not to see a casino built at the site. Once again, we are making it clear that the community still does not want a casino near this future residential site that can be potentially home to 9,000 new residents once completed.”