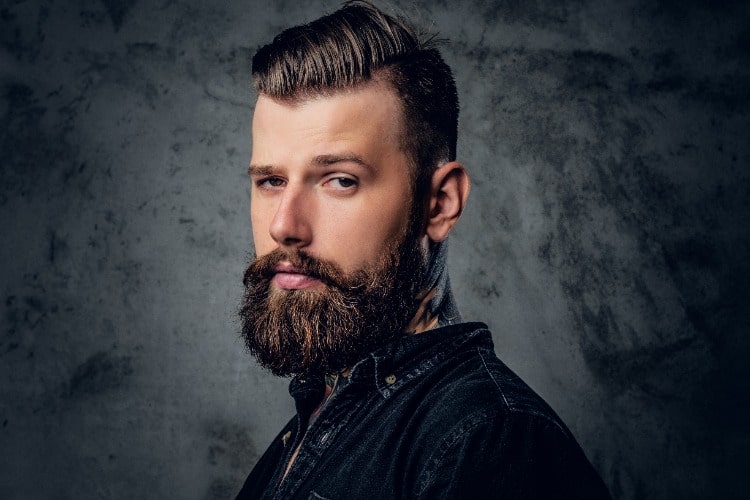 And I’ll take this moment to publicly congratulate FOX Bet and FanDuel — both under the Flutter umbrella (at least for now) — because if you populate either of their bet slips with a big number, it will tell you what your maximum allowable wager is. It’s imperfect, but it’s a step in the right direction.

Today, I’m back on the limit train. We’re going to talk about an Illinois legislator who might’ve accidentally stumbled into a way to stifle the sportsbooks. We’ll take a peek at France, where sportsbooks can’t limit their customers. But first, let’s talk about beards. (No, not this beard.)

Ah yes: beards. The slang term used to be reserved for women who dated or married closteted gay men to give them cover for their sexuality. This was during a time when being gay could cost someone their career, especially in Hollywood.

But today? Hey man, you do you, right? No one cares about someone else’s sexuality. Beards are probably — thankfully — a dying breed.

Except in the world of sports betting. Those beards are on the rise.

“I’ve been limited to nothing by virtually all the American sportsbooks,” said one professional gambler, who wished to remain anonymous for the following obvious reasons. “But I’ve been able to hire other people to use their sports betting accounts. They’re not tagged as sharp bettors yet, and I say to them, ‘Look, sign up, take the deposit bonus, keep it, just let me use your account.’”

And this anonymous gambler — let’s call him Betty White, as she served as a longtime beard for Liberace (plus there’s the “bet” pun, even better) — said he’s far from alone in this practice.

“Hard to say, but there’s for sure hundreds of us using beards,” Betty said. “Maybe even in the low thousands.” (For the record, “Betty” is not “Spanky” below. The tweet is just for demonstration purposes.)

It’s a cat and mouse game he’s sure the sportsbooks know is happening. He’s constantly wondering about the technology being used by the books in their ongoing efforts to catch him in the act.

“I have no idea what kind of technology they’re using, but I’m doing everything I can to not get flagged,” he said.

And so what does Betty White do? Betty uses multiple phones to place his wagers. Betty places his wagers from different spots, geographically. Betty uses different IP addresses. And Betty will purposefully lose money on all these accounts in order to continue looking like a square.

“I try to mix them up with as much straight action as I can,” he said. “Let’s suppose there’s a game, and one sportsbook has -2.5 and the other has +3. Not a bad bet, I’ll take both at -110, giving these people as much non-sharp action as I can just to give them volume, to try to give them business to draw attention away.”

This bettor won’t blink at tossing $50, $100, or even more away in vig in an effort to keep the sportsbooks from thinking he’s a pro.

But even with all these safeguards, Betty says these beard accounts will eventually get flagged, and he’s burned through numerous beards in the last few years.

He also thinks the practice is never going away, and that the sportsbooks will never be able to stop it.

One interesting note here: Betty said that in recent months, Caesars reached out to him, telling him he was no longer banned. Betty said so far, so good on that score, with Caesars accepting all his bets with more-than-reasonable limits.

Weeks later, DraftKings did the same, but Betty said the limits are still small. But maybe, just maybe, there’s a little detente brewing in the sharp vs. sportsbook battle. Maybe there won’t be any need for Rep. Jaime M. Andrade Jr.’s bill winding its way through the Illinois legislature.

First, though, a brief detour to France.

We come from France

I wrote about this for our sister site MI Bets last week, but it bears repeating: In France, sportsbooks are not allowed to limit bettors. Period. It’s against the law.

They try, though, as one in six complaints to the National Gaming Authority is due to limiting issues. As a result, the agency had to write a letter to the nation’s sportsbooks, reminding them of the rule.

Obviously, the sportsbooks can set limits for markets, but they can’t limit a player, unless they meet very specific criteria. And those criteria are:

So unless you’re basically a compulsive underage gambler/terrorist, you can bet to your heart’s content in France. But before you pack your bags, know this: French law also states that each sportsbook has to have a minimum hold of 15%. P-ew, as in Pepe Le.

This all bears the question: Is there any chance government officials here in America will step up and tell sportsbooks they can’t pick and choose their customers? Probably not, honestly, though one Illinois legislator may end up accidentally doing just that.

“Well, that makes the bill even better,” said Illinois state Rep. Jaime M. Andrade Jr. when I pointed out his bill — the Anti-Click Gambling Data Analytics Collection Act — would, as written, kind of prevent sportsbooks in Illinois from limiting sportsbook bettors.

But that wasn’t his main intent. It was geared toward online casino gaming.

“I don’t want these companies figuring out your thought process with artificial intelligence,” Andrade told me. “When you double down, when you fold, when you hit. They can save all this information and then bait you to lose whenever they want. I know there are safeguards in place, algorithms, but sometimes you have to put it in writing that you can’t do this.”

The bill, as written, states simply, “No entity that operates a remote gambling platform or a subsidiary of the entity shall collect data from a participant with the intent to predict how the participant will gamble in a particular gambling or betting scenario.”

Think about the effect that would have on sportsbooks: While the law wouldn’t explicitly make limiting players illegal, the sportsbooks wouldn’t be allowed to use any data to predict how you’re going to bet the next time you wager.

Net result? It would make limiting players impossible, at least by the current standards the sportsbooks use (whatever they are). I mean, on what grounds could a sportsbook limit someone if they’re not allowed to use previous data, if each bet is seen, legally, as its own individual wager and not part of an ongoing whole?

“Hopefully the sportsbooks don’t even realize it yet,” Andrade said. “I’m going to try and move it in the next session. Just because you’re good at sports betting doesn’t mean they should be able to ban you from betting. That’s not right.”

Happy little accident, this bill might end up being.

“I have no problem with any gambling operation keeping track of your data,” Andrade said. “They just shouldn’t be able to use it to predict your gambling.”

Reasonable take, if you ask me. And that’s your sports betting limit update for the time being. Now let’s all enjoy some Liberace.