"As we begin to introduce gambling into golf [TV coverage], you’ll see more of it in the coming months," a fellow broadcaster noted. 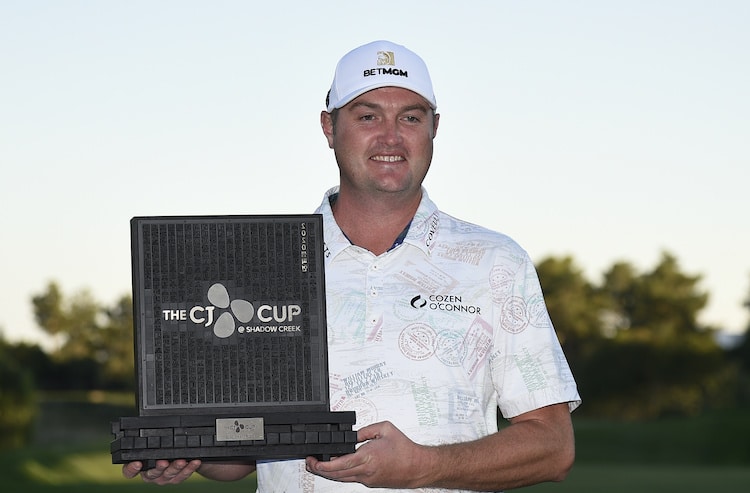 The CJ Cup PGA Tour event in Las Vegas – relocated this year from South Korea due to the COVID-19 pandemic – ended on Sunday with BetMGM-sponsored golfer Jason Kokrak coming through with his first career win in 233 Tour events.

But the beaming man wearing the BetMGM logo on his hat wasn’t the only breakthrough for the sports betting brand: The Golf Channel liberally posted all sorts of gambling odds for the event on all four telecasts.

One announcer noted that viewers could wager 100 dollars and win 200 with the first bet. He then recommended it as “good value” – and Thomas cooperated by sinking his 9-foot birdie putt.

“As we begin to introduce gambling into golf [TV coverage], you’ll see more of it in the coming months,” a fellow broadcaster noted.

A little later, viewers were shown a graphic that had Englishman Tyrrell Hatton – after taking the first-round lead – having his winning odds drop from +2500 to +550.

One promotional ad listed MGM Resorts as “proud to be the official partner” of MLB, Major League Soccer, the NBA, WNBA, and NHL.

There was a unique leaderboard that popped up on the TV screen on Thursday, noting not only the best scores but also “Live Odds” for each contender. (The lower scores in the top 10 climbed as high as 66-to-1, and Kokrak wasn’t even in that group yet.)

On Friday, The Golf Channel listed BetMGM’s odds on “Low South Korean In The Field” with five names and odds ranging from +130 Sungjae Im to +1800 Jaekyeong Lee. The winning play turned out to be Si Woo Kim at +350, who finished tied for 17th place overall.

For the brutally difficult 13th hole on Saturday, American star Xander Schauffele faced 9-to-1 odds of making a birdie, with the announcer suggesting that 10-to-1 would be more his speed.

Schauffele – who birdied the hole on Sunday while finishing second to Kokrak – narrowly missed a 32-foot birdie putt in that third round.

As it happens, Shadow Creek is a golf course frequented by business partners of BetMGM – including Kokrak, who said he had played “north of 20 rounds” on the course.

Not to be outdone, daily fantasy sports giant FanDuel – now a major sports betting player in states such as New Jersey and Pennsylvania – ran a commercial during the tournament with former “Gamble On” podcast guest James Holzhauer.

“Jeopardy James,” as the Las Vegas-based professional sports bettor is known due to his legendary game show prowess, is asked by a sports fan how much he should wager.

But it’s not just golf, of course, that has entered this “brave new world” that no doubt will agitate some more traditional sports fans.

MLB also in the betting game

In the pre-game show on TBS on Saturday night advancing the deciding Game 7 between the Tampa Bay Rays and Houston Astros, longtime broadcaster Ernie Johnson framed one segment around the question of whether the Rays would score “over or under” 3.5 runs.

Other DraftKings Sportsbook odds popped up on the screen, including the Rays at -113 on the “money line” and the Astros at -1.5. The over/under total runs scored, the graphic noted, was 7.5 runs.

Johnson ultimately advised viewers to take “under” 3.5 runs for the Rays, adding that he had an 8-3 record on such wagers in previous pre-game shows.

The Rays wound up winning, 4-2, scoring the “over”-deciding fourth run in the sixth inning.

The increasingly aggressive advertising approach to sports betting on broadcasts is a bit curious. While roughly half the 50 U.S. states now permit such wagering legally, a majority of the population can’t join in that way.

That’s because the three largest states – California, Texas, and Florida, with a combined 90 million residents – have not legalized sports betting.

The fourth-largest state – New York, with almost 20 million residents – only permits sports betting in-person at casinos that all are at least 100 miles north of midtown Manhattan.