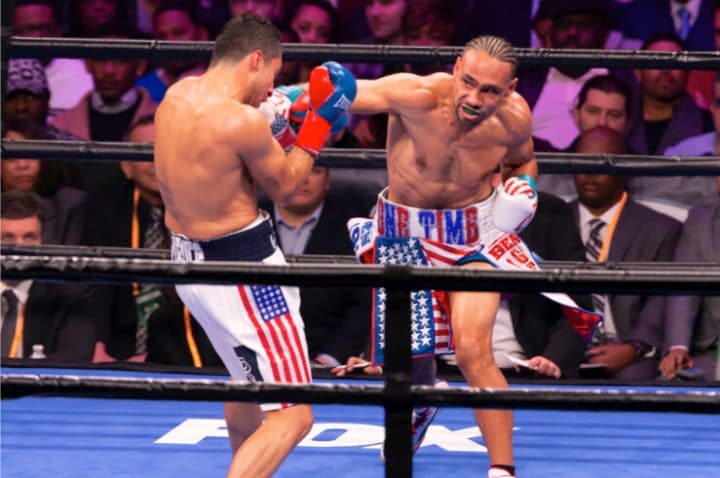 The suits working for the NFL, NBA, MLB, and the other major sports leagues can lobby for “integrity fees” all they want, but the fact is that in a team sport, there’s only so much a single compromised player can do to control the outcome of a game.

In an individual sport, on the other hand, it doesn’t even take two to tango. When it comes to fixing a result, you just need one participant with a vested interest in something other than simply trying to win.

Match fixing in tennis is so common, it has its own Wikipedia page. Still, the bounce of the ball is not perfectly predictable.

Boxing, in particular, has a long and infamous history of fixes and suspected fixes, creating a perception far worse than the reality. After nearly every fight, you can find some casual viewers conspiracy-theorizing (especially in the social media age) that it wasn’t on the level.

It’s with this reputation in mind that welterweight Keith Thurman’s recent TMZ interview in which he claimed he’ll be betting on his own fight against Manny Pacquiao on July 20 is particularly worthy of exploration. Thurman won’t be taking a dive, mind you; the tens of millions of dollars available in his next fights should he beat an icon like “Pac-Man” assure that. But it’s still fair to wonder if the outcome is compromised in some way by Thurman being permitted to wager on his own bout.

‘Gotta bet on the KO’

Thurman said he’ll be betting on himself to win by either first- or second-round knockout.

Notably, Thurman revealed this plan in response to the information that Pacquiao’s trainer, Freddie Roach (or “40 roaches,” according to the world’s worst closed-caption auto-transcription), is betting on Pacquiao to win.

So we have one boxer’s coach betting on his man, and the opposing boxer betting the other way on a specific outcome.

This wouldn’t fly in most sports. The major pro leagues have rules against the participants wagering.

You might have heard of Pete Rose, one of the greatest hitters baseball has ever known and a man who almost certainly won’t become a Hall of Famer during his lifetime because he bet on MLB games.

The Rose supporters will insist that, well, as long as he never bet against his own team — at the time he was busted, he was the manager of the Cincinnati Reds — he wasn’t doing anything immoral. But the counterpoint is that if he bet on the Reds to win some games, then he could potentially be tanking the other games to inflate the price on the Reds for the games he did bet.

It’s easy to apply the same logic to Thurman. In his last fight, in January, he struggled mightily against Josesito Lopez, an opponent he was expected to walk through. Had Thurman dominated that bout, he probably would have come into a Pacquiao fight as about a -200 favorite. Instead he sits at between -130 and -115, depending on the sportsbook.

Nothing about the Lopez fight looked fishy; Thurman was rusty and got rocked a few times by a game veteran fighter. It happens.

This apparently isn’t the first time Thurman is planning to bet on himself to stretch his opponent early. When CBS Sports’ Brian Campbell was interviewed last week on Dan Canobbio’s Inside Boxing Live, he revealed that Thurman recently told him he bet $2,000 on himself to knock Danny Garcia out in the first round in their March 2017 fight. Thurman wobbled Garcia in the opening round, but couldn’t do enough to win the bet, instead prevailing via split decision after 12 rounds.

It’s unclear whether Thurman bet on himself legally or at an offshore sportsbook, and whether he placed the bet himself or had a proxy do it. At the time, Nevada was the only state with legal sports betting, and the fight was in Brooklyn.

If a sportsbook knows Thurman himself made a particular bet, that book might adjust the odds a particular way, armed with information the general public doesn’t have. There’s a case to be made, similar to the debate over whether poker players should publicly disclose when they swap pieces, that a boxer, if he bets on himself, should at least have to publicly announce the bet he’s made.

In short, boxers, or any athletes, really, being allowed to bet on themselves gets messy. But there’s also a case in favor of it.

“I love when fighters do that,” Campbell told Canobbio of Thurman betting on himself to stop Pacquiao. “You’re going to get a certain part of the audience saying fighters should never bet on themselves because of, obviously, the potential that they would try to control some form of the outcome based on their own financial windfall potential. But I love the idea when it presses someone into action, and the idea of somebody betting on themselves, meaning, ‘I am so confident I’m going to win, I’m going to put my own money where my mouth is.’”

Nobody put more money where his mouth was than Floyd “Money” Mayweather, who is reputed to have bet on himself many times (always a good bet, considering he retired undefeated).

Interestingly, when Mayweather tried to bet on himself in his sideshow mismatch against novice boxer Conor McGregor in 2017, the Las Vegas sportsbooks rejected the wager. He wanted to bet six figures on himself to win by knockout, but the books weren’t sure if anything other than a straight bet by a fighter on himself to win was permissible under Nevada rules.

This suggests that if indeed Thurman bet on himself by KO against Garcia, it was with an unregulated sportsbook or an illegal bookie, or someone else placed the bet for him.

That opens up another gray area within this discussion: betting on yourself by having someone bet on you. For example, before his stunning June 1 upset of Anthony Joshua, heavyweight Andy Ruiz exuded a confidence that led several of his family members to bet on him, he told Jimmy Kimmel.

That seems kosher. But what if, say, Kevin Durant’s friend bet on the Raptors to beat the Warriors in the NBA finals because he knew the full extent of Durant’s injury that others could only speculate on? Yes, that’s a couple of gradations removed from a family member betting on Ruiz, but it illustrates the slippery slope.

There’s no easy answer to the question of whether a boxer should be allowed to bet on himself. And if the regulated sportsbooks won’t allow it, the boxer can probably get the bet down in some unregulated manner, where the chances of the public knowing about it and responsible parties being able to monitor it decrease.

Keith Thurman says he’s betting on himself to knock Manny Pacquiao out in either the first or second round. He might not place the bet himself, and he might not do so legally. But armed with the knowledge that he intends to do it, should that impact how the average sports bettor approaches the fight?

Thurman actually knocking Pacquiao out early is an extreme long shot, given Pacquiao’s history. He’s been knocked out only once this century, in the sixth round, by a far better fighter than Thurman.

Much more likely than a knockout win by Thurman in the first or second round is Thurman punching himself out trying to win his bet — in which case longshot odds on Pacquiao by mid-rounds stoppage might have some value.

The ‘Sho’ Goes On For Friday Night Boxing Card, Giving Sports Bettors Something To Consider