The old-timers are underdogs in Tuesday’s charity round, but they may have an edge 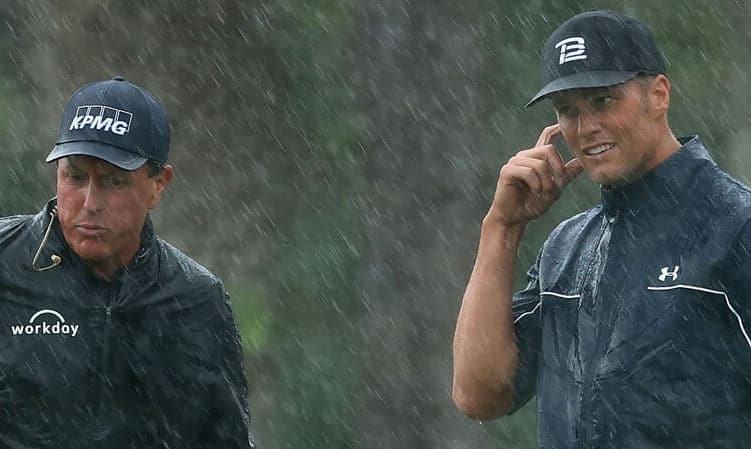 Aaron Rodgers and Bryson DeChambeau are heavy favorites to defeat Tom Brady and Phil Mickelson in this year’s edition of The Match on July 6 in Big Sky, Mont. (Circa has the younger duo at -180, which is about where other books are.) It’s no wonder why: As SuperBook Executive Vice President Jay Kornegay points out, matter of factly, DeChambeau is ranked far higher than Mickelson on the PGA Tour (No. 6 vs. No. 31 heading into this past weekend’s Rocket Mortgage Classic in Detroit), while Rodgers’ golf handicap (3) is lower than Brady’s (8).

But those who dabble in sports betting shouldn’t count the older underdogs out in the fourth annual match-play duel, which will raise millions of dollars for Feeding America and other charities. They have geography on their side.

Bear spray in the golf cart

Brady and Mickelson both own offseason homes near The Reserve at Moonlight Basin, the Jack Nicklaus-designed course where The Match will be played. They golf a fair amount — sometimes together — at a private course on the grounds of The Yellowstone Club, an ultra-exclusive mountain retreat favored by A-list celebrities like Justin Timberlake and Ben Affleck, who recently took his new/old girlfriend there for a romantic getaway.

Montana native Truxton Rolfe, a software salesman and civic booster who lives in Missoula, has played both Moonlight Basin and the Yellowstone Club. He feels that the latter course, which was designed by Tom Weiskopf, is both “a little more straightforward” and “more bougie.”

“There are three or four snack shacks that are just open, with no one inside,” he said.  “You can just take all the food and booze you want.”

As for the 8,000-yard Moonlight Basin, which sounds like a rejected Wes Anderson title, Rolfe said, “It’s the only course I’ve ever been to where you have bear spray in the golf cart. It’s really, really cool. The view of Lone Peak, it’s just incredible. With the elevation, you get [the distance of an extra] club.”

That elevation is not to be taken lightly. It’s common for pro athletes to grouse about traveling to Denver — where the breathing’s not easy — to take on the Broncos, Nuggets, or Avalanche at 5,280 feet above sea level, while road pitchers lament having to serve up sliders in the launching pad that is Coors Field.

Well, Moonlight Basin sits at about 7,500 feet above sea level.

That sort of elevation takes some getting used to, and Brady and Mickelson are definitely “more used to it,” said Rolfe, adding that the pair’s familiarity with the area’s courses could give them an additional edge. While it’s not known whether Brady — who seems to have anointed himself king of #dadjoke Twitter in the run-up to The Match — or Mickelson has played Moonlight Basin before, “it wouldn’t surprise me,” said Rolfe.

How many times do you think I can make this joke before July 6th? @AaronRodgers12 @PhilMickelson @b_dechambeau pic.twitter.com/7vkjTtCPJ9

The Happy Gilmore-ing of golf

Moonlight Basin’s 17th hole is a 777-yard Par 5. (No, that’s not a typo.) The big-hitting pros would normally have a puncher’s chance to reach the green in two, but since The Match’s format restricts each duo to choosing which of its two drives to play before players alternate shots, DeChambeau likely has his team of underground scientists developing a club that will allow him to drive the green outright. Or he could have advance scouts on location working to enlist a highly coordinated bald eagle that can snatch his ball out of midair and deposit it on the putting surface.

You can’t put anything past Bryson, who, along with fellow beefcake bro Brooks Koepka, has ensured that the Happy Gilmore-ing of golf has now encompassed the sport’s highest ranks. While Circa Sportsbook Operations Manager Jeff Benson said his book “may offer some props day of,” he was wary of setting an over/under on how far DeChambeau can hit a football off a tee.

Come to think of it, making the golfers play football isn’t a bad idea for next year’s Match. And speaking of props, DraftKings announced Tuesday that it will be donating thousands of meals to Feeding America based on how far DeChambeau drives the ball in Big Sky, with a 300-yard drive resulting in 300,000 donated meals, a 400-yard drive netting a 400,000-meal donation, and an (almost) unthinkable 500-yarder yielding 500,000.