Brady's Pats have slipped in the course of two losing weeks from the Super Bowl favorite to a +650 fringe contender. 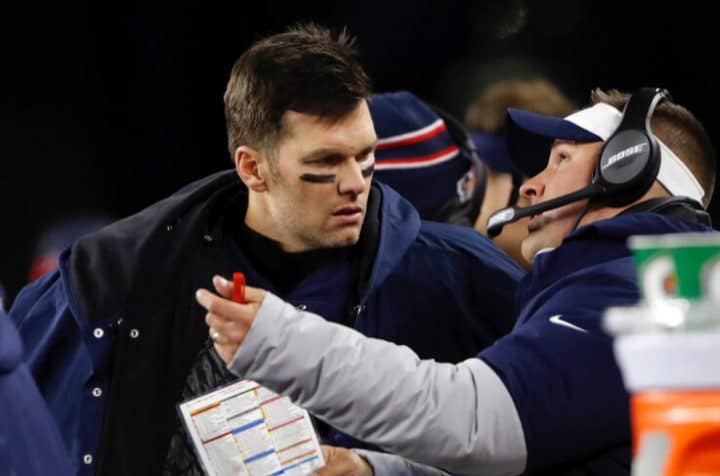 It has to end sometime.

Tom Brady may look from the neck up (and particularly from the forehead up) like he’s aging in reverse, but according to his birth certificate he is 42 years, five months, and six days old, and that clock doesn’t actually wind backward for anyone.

By dedicating his mind and his body to football like no quarterback before him, Brady has defied all expectations to get this far. He won a Super Bowl at 41 and is still a competent NFL quarterback at 42. Some would say he’s approximately Kirk Cousins at this point, which is to say, he’s amazing for a guy in his 40s and about average for an NFL starter in 2019.

But by Tom Brady standards, he’s looking a little — do we dare bust out the modern hashtag of choice? — yep, he’s looking kind of #washed. He’s 30th in the league in completion percentage among qualifying passers at 60.5%. He’s 29th in yards per pass attempt. His 19 touchdown passes rank a modest 13th — and see him tied with Matthew Stafford, who has played in five fewer games. Depending on which imperfect metric you prefer, he ranks either 18th (QBR) or 22nd (passer rating).

But it might be time to take the other side. The Pats are a mere 7-6 ATS this season. If Brady’s done and the Patriots’ dynasty is over, you don’t want your sports betting bankroll to be the last to find out.

On the one hand, the Patriots stand at 10-3, good for the AFC East title and the No. 2 seed in the conference if the season ended now. On the other hand, since an 8-0 start against a mostly weak assortment of opponents, New England is 2-3, including two straight defeats, and the team is 0-3 in that stretch against fellow AFC division leaders.

The Pats lost on Sunday to Kansas City by a score of 23-16, and, no doubt, a couple of blown calls by the officials took pivotal points off the board for them. Still, it’s hard to ignore that Brady threw for just 169 yards on 36 attempts to compile a 63.3 passer rating and a 39.0 QBR. The refs hurt the team’s cause; the GOAT QB did very little to offset that.

Two weeks ago, at 10-1, the Patriots were still the Super Bowl favorites at just about every sportsbook. One week ago, they were in second place at about +400.

Some version of this happens most seasons — there’s a point at which people start to write off New England’s Super Bowl chances because either Brady had a bad game or a few key players are injured or the defense can’t get stops. And most seasons, the Pats still put it together in the playoffs and at least make a deep run.

But the oddsmakers are now daring bettors to back them. The Pats have slipped to +260 just to get to the Super Bowl — and the Ravens are actually priced as if they’re more likely to win the AFC than not, at -110 at FanDuel.

Even the AFC East title, the surest of things all season, with the Pats listed at -10000 at one stage, isn’t locked down. FanDuel has them at -3000 to win the division, with the Bills, one game back in the standings, lurking at +1300.

(By the way, a quick reminder to always shop around for the best lines. PointsBet has the Pats at -3333 for the AFC East and Buffalo at +1000, meaning you’re not getting the best value on either team at that particular book.)

It’s almost unimaginable, mathematically or otherwise, that the Pats will actually miss the playoffs; FanDuel has the “no” on a playoff berth priced at 100/1, and it won’t let you bet the “yes.”

But it’s been a long time since confidence has been this low about what New England will do once it gets there. And of course, Brady has never been 42 when entering the stretch run of a season.

Adding to Pats fans’ angst is the chatter about Brady potentially playing for a different team in 2020.

Can next year’s 43-year-old Brady still play at a championship level? We’ll get some idea of the public’s perception on that front if 2020 odds shift as rumors float about him heading to various teams.

The mill has churned everything from the Giants in the country’s biggest media market, to the Chargers in a major market that doesn’t seem to care about them, to teams like the Bears that are maybe just a competent QB away from contending.

Would Brady jumping from the Pats to one of those franchises move their futures odds?

If he was 30, certainly. If he was 40, probably. But this is a different Tom Brady. Maybe he still has some January magic left in those creaky legs, but if he’s the league-average signal caller he’s looked like most of this season, the sportsbooks should be done fearing him, regardless of uniform.