Antonio Brown forced his way into Tom Brady's receiving corps and forced the sportsbooks to revise their Super Bowl odds. 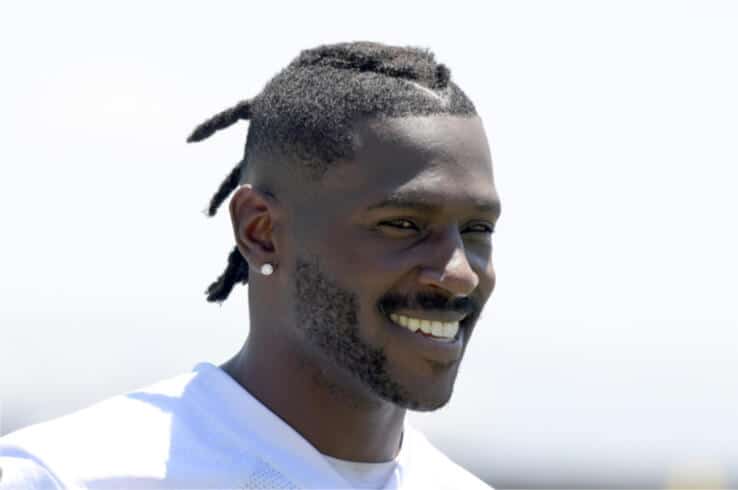 To Raiders fans, Patriots fans, general NFL fans, and anyone with a passing interest in human drama, emotional meltdowns, or conspiracy theories, the “how” and the “why” of Antonio Brown getting released by Oakland and signed by New England on Saturday is worthy of endless exploration.

But for the sports betting community, all that really matters is the “how much.”

The defending Super Bowl champion Patriots adding a wide receiver who is arguably still the best in the league at his position, and is inarguably a top-five WR, shortened — or deflated, some might say — their futures odds instantaneously.

At FanDuel Sportsbook in New Jersey, the Patriots went from +700 to +550 to win the Super Bowl, while their closest competitor, the Kansas City Chiefs, shifted from +800 to +850 with the news. By Monday morning, after the Pats had trounced the Steelers to open their season, they were down to +450. (The Chiefs also came down a bit, to +750, after opening their season with a convincing win over Jacksonville.)

Even at +450, those FanDuel odds on New England are better than what you’ll find elsewhere; they’re +400 at NJ competitors DraftKings, FOX Bet, Play SugarHouse, and PointsBet.

If you liked what you saw from New England last night, you can still get Tom Brady and the boys at +400 to win it all. Or +200 to simply win the AFC. #MakeTheCall https://t.co/mIkEGp0Ux3

And a few changes at @SuperBookUSA on Patriots markets on Antonio Brown news, per @vegasmurray:

And the Superbook didn’t insta-adjust those AFC East numbers nearly enough. In that sorry division featuring the hapless, tanking Dolphins and the middling-at-best Bills and Jets, with Week 1 in the rearview for all four teams, the Pats are now -1000 at PointsBet and FanDuel and a whopping -1430 at DraftKings and SugarHouse.

(FanDuel offered an “odds boost” special a couple of weeks ago of +100 on the Patriots to win their division — with a $25 limit. Pour one out for any New Jersey bettors who didn’t log on that day and missed out on the free 25 bucks.)

The Raiders’ futures odds changed too after AB defected, although they were always going to be pretty darned inconsequential. But for what it’s worth, they went from 40/1 to 100/1 at the Superbook to win the Super Bowl.

Of more relevance is Oakland’s win total, which remains at 6 at most books, but the juice on the under went from around -120 at most sportsbooks to -150 now that Derek Carr’s best wideout is probably Tyrell Williams.

What can Brown do for New England?

Assuming Brown isn’t going to be a constant source of headaches and distractions — and how safely you can assume that depends on how much of his behavior in Oakland you believe was part of a diabolical plan by Bill Belichick, Brown, and agent Drew Rosenhaus to get him onto a Super Bowl contender — he undoubtedly makes the Pats better.

You take a team with the most successful coach ever and the most successful quarterback ever and add Brown to a list of offensive weapons that includes Julian Edelman, Josh Gordon, Sony Michel, and James White, factor in their reasonably strong defense that just held the Steelers to three points, and it sure feels like the Pats are, once again, the team to beat.

However, recent history suggests having a superstar wide receiver is overrated when it comes to winning championships.

Brown has never won one. Julio Jones hasn’t either. Same with Odell Beckham Jr. and Michael Thomas and whoever else you can make a case for as a current top-five receiver.

If you look at every Super Bowl champion this decade, you won’t find a single one that did so with a consensus top-five WR.

Don’t believe us? Here are the Super Bowl champs of the 2010s and their best WRs:

There’s a fringe case for Thomas as a top-five WR in 2015, but it’s a big reach. He was seventh in the NFL in both catches and yards and tallied only six TDs.

The last team to win the Lombardi Trophy with a legit top-five wide receiver on the roster? The ’06 Colts with Marvin Harrison.

Something to keep in mind before assuming Brown will win the Patriots the gold and you the green.