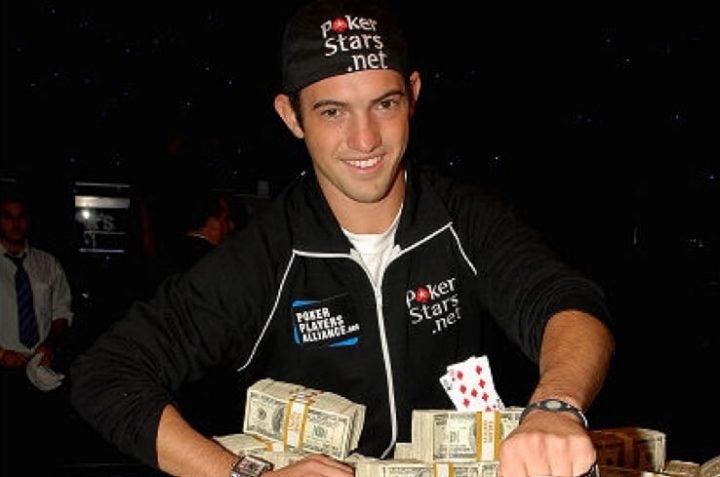 Nine players return to the Rio in Las Vegas tonight for the start of the World Series of Poker Main Event final table looking to earn $8.8 million. One of those nine returns to the Rio tonight looking to make history.

If not for Joe Cada, poker would have had a No-Name Nine on the game’s biggest stage this year, but the 2009 world champion lends that ever-attractive star power and will represent the central storyline for as long as he’s in the hunt.

Cada was the youngest Main Event champ ever when he won it just shy of his 22nd birthday. Now 30 and a three-time bracelet winner, the kid from Michigan is the most experienced player at the table, and the only one not yet guaranteed a career-high payday.

But there’s more history to be made if Cada (who was down to a mere 16,500 chips at the end of Day 1 and has been among the shorter stacks all tournament) becomes the last man standing out of a starting field of 7,874:

Cada, however, is not the favorite to win, as he currently sits in sixth place with a mere 6% of the chips in the play. Here’s a complete look at the final table stacks:

While it looked until the last hand of Day 7 play (more on that in a bit) like Michael Dyer would come into the final table as a monster chip leader, instead we have the unusual circumstance of two giant stacks that have distanced themselves from the pack.

Both Muskegon, Michigan’s Nicolas Manion and Houston’s Dyer enter tonight’s play a few chips shy of that 30% line. Of the 393,775,000 chips out there, Manion has 28.6% and Dyer has 27.7%. Neither is a prohibitive favorite. But strictly based on chip stacks, there’s a 56.3% chance that one of them will take it home.

Cooler than the other side of the pillow

The hand that everyone is talking about today, the one that both determined the final nine and completely reshaped the chip dynamics of that final nine, has to go down as the most ridiculous cooler ever dealt on the final table bubble. At about 11:45 p.m. Vegas time on Wednesday, amateur Manion, a medium stack entering the hand, found himself on the right side of a shocking set-up.

It isn’t easy to get from ten players down to nine when nobody wants to take a big chance … unless you deal one player pocket aces and two players pocket kings. Yueqi “Rich” Zhu, seeking his second bracelet of the summer, three-bet all in with his kings, and Manion went over the top all in with his aces. That left Antoine Labat, who had both players covered, in a spot where he could legitimately consider folding kings pre-flop.

But in the end he couldn’t make the laydown, leaving himself as the short stack with only 13 big blinds left when neither he nor Zhu could catch a lucky straight or flush. (Zhu, in fact, couldn’t even win with a flush, as Manion’s aces happened to be in the same suits as his cowboys.) Just like that, Zhu was the bubble boy, Labat’s stack was decimated, and Manion became the chip leader.

“Somehow this is real life,” Manion marveled. “When I got both calls, I flipped over my hand and I didn’t even stay to see what they had. I went straight to my rail, looked up at the TV, and they had set up pocket kings vs. pocket kings and my aces.”

Does past predict future?

Cada is the only name casual poker fans would know at this final table, but he isn’t the only player with a track record for success. Here’s a look at the total career live tournament earnings, prior to the 2018 Main Event, for all nine players:

It’s very interesting to note that the three biggest stacks — Manion, Dyer, and Tony Miles — are the three least proven tournament players. The chance of one or more of them wilting under the pressure at some point Thursday, Friday, or Saturday can’t be discounted.

Artem Metalidi of Ukraine and Alex Lynskey of Australia have both gotten heads up for a bracelet in the past — Lynskey in 2017, Metalidi back in 2012. And John Cynn, who was given a clever nickname in the wee hours Wednesday night by writer and poker player Matt Salsberg, nearly final-tabled the Main Event two years ago, finishing in 11th place for $650,000.

But they’re all way behind Cada when it comes to accomplishments. With ninth place paying an even million dollars, every single player at the table is already guaranteed the biggest payout of their careers … except Cada.

He won just over $8.5 million when he became world champ in 2009, meaning there’s only one way he can top that: by finishing first.

Is It Time For The WSOP To Relocate From The Rio To Another Casino?

From Worse To Bad: FanDuel Sportsbook At The Meadowlands Adjusts Its Lines, But There’s Still Room To Improve