Caesars Unveils Renderings For Virginia Casino To Open In Late 2023

The $500 million casino will include a sportsbook and WSOP-branded poker room. 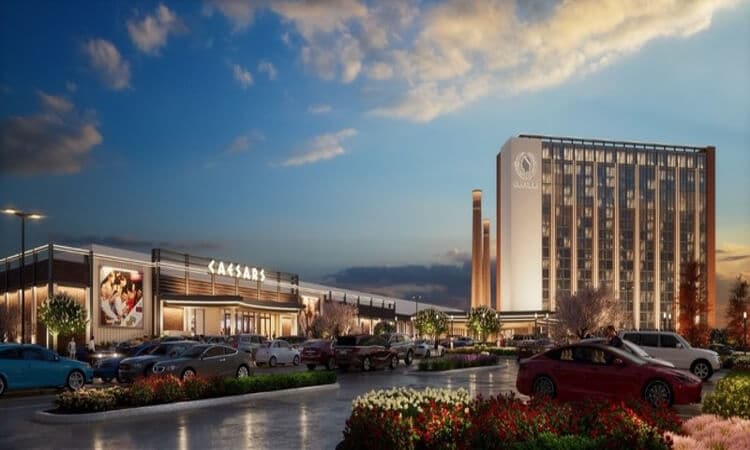 Caesars Entertainment shared official renderings Thursday for Caesars Virginia, a $500 million resort expected to break ground during December in Danville. The property is expected to open in late 2023.

The project will include 500 hotel rooms, a casino floor, a Caesars Sportsbook, and a World Series of Poker-branded card room, in addition to other traditional casino amenities. Danville residents voted like those in Bristol, Norfolk, and Portsmouth last November to allow casinos by referendum, with the cities now in various stages of the development process.

Virginia also legalized sports betting in 2020, and mobile wagering is already available, but there is not yet any retail wagering in the state. Caesars Sportsbook is live in cyberspace.

“Caesars Virginia will be an economic driver for the region, both as a tourist and entertainment draw and through the more than a thousand good-paying jobs the resort will create,” said Anthony Carano, president and chief operating officer of Caesars Entertainment, in a news release. “The people of Danville have entrusted us to build a world-class resort, and we look forward to proving that trust was well founded with an incredible resort worthy of the iconic Caesars brand.”

Danville Mayor Alonzo Jones commented: “Over the course of the last two years, myself, City Council and staff have taken great care to develop plans, alongside residents and Caesars Entertainment, to create a resort that will positively impact the community through new tax revenue, jobs, partnership opportunities with local businesses and tourism dollars. We are confident that Caesars Virginia will honor the old Dan River Mills’ Schoolfield site and become a pillar of pride for Danville and its people.”

The gaming floor is expected to have more than 1,400 slot machines and table games, but there is no specific breakdown provided. The poker room will be moderately sized at 25 tables. For comparison, the nearby MGM National Harbor in Maryland has 37.

There will be 40,000 square feet of meeting and convention space.

How popular will the casino be?

A 2019 study from a group called Fourth Economy found that a casino in Danville could see between 1 to 2 million visitors each year. About $315 million in annual spending at the casino and at other businesses in the city is anticipated.

The casino from Caesars is expected to generate 900 construction jobs and 1,300 ongoing jobs. The average compensation including wages, tips, and benefits for a full-time employee at the property will be $50,000 to $55,000.

Danville is expected to benefit to the tune of $38 million in annual tax revenue from the casino.

The renderings released Thursday weren’t the first from Caesars. It released this video in 2020.

The content was released ahead of a successful vote on the project.

Caesars Virginia will be a reality thanks to the citizens of Danville. Last night, the casino referendum passed in Danville, Virginia. pic.twitter.com/82z9f8FMYW