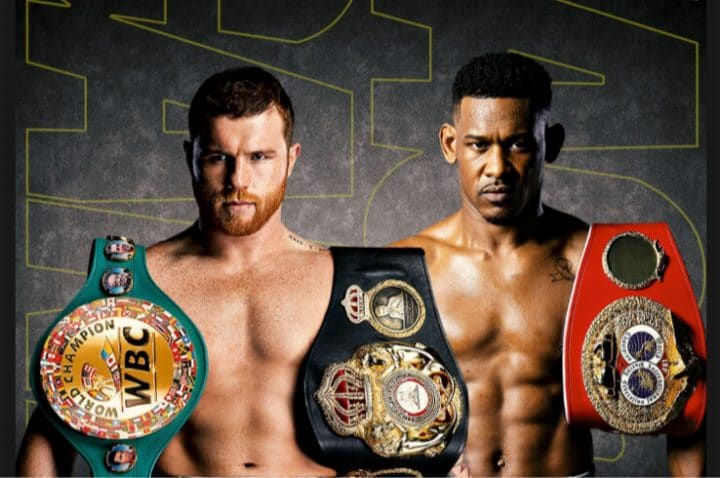 Oscar De La Hoya, the Hall of Fame boxer, former biggest draw in the sport, and current promoter of middleweight champion Saul “Canelo” Alvarez, turned the first weekend in May into a Las Vegas boxing tradition. For Mexican fight fans, Mexican-American fight fans, or fight fans of any other nationality who just wanted an excuse to party in Sin City and watch a little gloved violence, the Saturday closest to Cinco de Mayo has been, along with Mexican Independence Day weekend in September, a staple of the boxing calendar since the gold-medal-winning son of Mexican immigrants planted his flag in the early 2000s.

For a while the date belonged to Floyd Mayweather — not necessarily with a Mexican flavor — but now it’s back in De La Hoya’s possession, indirectly, via Guadalajara superstar Alvarez. He KO’d Amir Khan at T-Mobile Arena on May 7, 2016. He dominated Julio Cesar Chavez Jr. at T-Mobile on May 6, 2017. He was set to face Gennady Golovkin there on May 5, 2018, until a positive drug test blew it up.

This Saturday, Canelo faces Daniel Jacobs at T-Mobile in defense of the lineal middleweight championship of the world, in the biggest boxing match of 2019 so far.

The Alvarez fans are descending upon Las Vegas right now, and they’ll be moving lines from now until the bell rings.

Of course, you don’t have to be in Vegas to legally bet the fight. On all previous Cinco de Mayo fight weekends, Nevada was the only place to wager with a bookmaker you knew would pay. In 2019, you can participate in legal sports betting in eight states.

But no matter where you go to bet this bout, one thing is for sure: You’re going to have to lay a hefty price on Canelo.

Because the odds are a reflection not of how bookmakers expect an event to play out but rather of how they expect the public to bet it, Canelo, incredibly, is about as prohibitive a favorite in this highly competitive fight with the outstanding Jacobs as Mayweather was against boxing novice Conor McGregor in 2017.

Every serious boxing fan knew that Mayweather, who bounced between -300 and -600 in the lead-up to the fight, was a safer investment than any stock on Wall Street.

The odds on underdog Jacobs don’t vary much from book to book. But the price you have to lay on Alvarez does — especially at FanDuel, where they’re begging you to take your business elsewhere if you want to bet Canelo straight up.

How close to reality are these odds? Not very.

Alvarez, 28, gets better with every fight and scored a career-best majority decision win over the fearsome Golovkin last September. At 51-1-2 (35 KOs), with his only loss coming when he rushed into a Mayweather fight at age 23, Canelo has proven himself among the top five fighters, pound-for-pound in the sport.

But Jacobs is arguably the best opponent he’s faced as a middleweight. At worst, he’s the “1A” to Golovkin’s “1.” In fact, Jacobs, 32, fought Golovkin on roughly even terms back in 2017 when many still believed “GGG” to be nearly unbeatable, only to lose a disputed decision. Now 35-2 (29 KOs), Jacobs, whose remarkable story of beating bone cancer has been repeated ad nauseum but is legitimately inspiring if you’re learning about it for the first time (and puts Tiger Woods’ return from injury and adversity to shame), has to be considered a serious threat to Canelo. “The Miracle Man” is taller, longer, and can both box and punch at an elite level.

Based purely on the in-ring merits of the boxers, Jacobs should be no more than a 2/1 underdog in this fight. But the odds account for two outside-the-ring factors: public support of Canelo, and that pesky tendency the ringside judges have to give the Mexican superstar every benefit of every doubt.

Dating back to 2013, Alvarez has had close calls against Austin Trout, Erislandy Lara, and Gennady Golovkin (twice). General public opinion is that he deserved to narrowly win the Trout fight, narrowly lose the first Golovkin fight, and the other two were about even. In those bouts, Canelo has officially gone 3-0-1, with eight scorecards in his favor, two against, and two even.

Canelo is the cash cow. He also has a style that impresses judges; there’s a showmanship to his offense and defense that makes it obvious when he’s landing clean and when he’s making opponents miss.

The sense that Jacobs needs to visibly dominate the fight to win on the cards is what’s driving the odds to be so wide. And it’s reflected in the method-of-victory odds as well:

Alvarez by decision is the no-brainer most likely outcome in this fight. Sure, Canelo can pop and Jacobs’ chin is suspect (he’s been KO’d once and knocked down three times), and Jacobs is a championship-level talent who can absolutely rise to the occasion and score the upset win. Still, at -125 at DraftKings, Canelo on points (which also covers a technical decision) seems a better investment than laying -450 or more on him just to win.

That said, 23/1 on a draw at FanDuel, especially considering the frequency with which boxing judges conjure up draws, does get the salivary glands going a bit.

The over/under is an intriguing betting option as well in this fight. All of the books have set the line at 10½ rounds, and the over is the clear favorite:

It’s apparent that bettors have been hammering the over much more in Vegas than in Jersey.

DraftKings and PointsBet also offer an alternative way to make a similar bet, asking whether the fight will or will not go the full 12-round distance.

There’s absolutely no reason to make that over wager at PointsBet, however, since you can get the exact same price on the fight to go over 10½ rounds and buy yourself an extra 4½ minutes for free.

Other props to shop

DraftKings also has several undercard fights available for betting, but frankly, it’s not a strong show beyond the main event, and there isn’t much value to be found among the various -2500 favorites and +800 underdogs.

However, FanDuel and PointsBet both have extensive menus of additional betting options on the Alvarez-Jacobs fight.

At either site, you not only pick the round the fight ends, but pick the minute it ends. Any of the first three minutes are +10000 at FanDuel and +12500 at PointsBet. Any of those bets are like picking a number on the roulette wheel, and in this case, with a fight that’s more likely to go the distance than not, it’s a roulette wheel with about 50 green zeros.

As a seasoned Canelo viewer, those odds for the fight to end in a split or majority decision one way or the other are among the most appealing longshot bets on this fight.