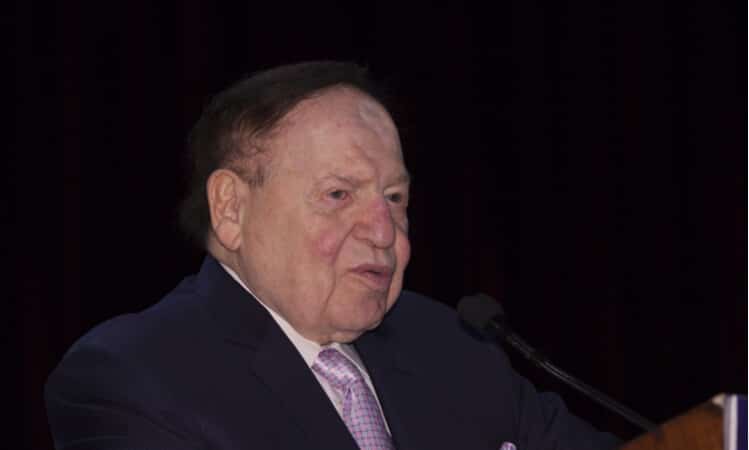 Sheldon Adelson, one of the most famous and rich casino moguls in U.S. history, died on Monday at the age of 87. The founder, chairman, and CEO of Las Vegas Sands Corp. lost a years-long cancer battle.

“Our founder and visionary leader, Sheldon G. Adelson, passed away last night at the age of 87 from complications related to treatment for non-Hodgkin’s Lymphoma,” the company said in a statement.

Adelson’s U.S. casinos included the Venetian and Palazzo properties on the iconic Las Vegas Strip, as well as properties in Macau and Singapore. Adelson, who had a net worth of more than $30 billion, once owned a casino in Pennsylvania, but he later cashed out of that market. In recent weeks Adelson’s company began a serious lobbying push for the legalization of casinos in the state of Texas, a lucrative untapped market. The lobbying undoubtedly will continue after his death.

In the online gaming world, Adelson was a very controversial figure, even a pariah of sorts in the industry. He long opposed online gambling, citing societal concerns, namely addiction. Some called that a hypocritical position from the world’s richest casino owner.

“[O]nline gambling is not a threat to my business,” he wrote in a 2013 Forbes op-ed. “It’s a threat to our society — a toxin which all good people ought to resist.”

At the time, online poker was arguably the predominant form of online gaming, so Adelson was especially reviled among the poker community. Some boycotted his live poker room at the Venetian, despite it being one of the largest in terms of tables in town.

The U.S. poker community was still reeling from the 2011 “Black Friday” crackdown of offshore poker sites, with many poker players practically begging state legislatures across the country to bring online poker into a regulated environment and tax it. Adelson was considered the no. 1 roadblock. Many poker players at the time had or were in midst of seeing the loss of their livelihoods.

The public relations battle against regulated online gaming wasn’t the end of it. Adelson once vowed to spend “whatever it takes” to stop the proliferation of state-sanctioned online betting. His efforts to enact federal legislation banning online gaming drew the ire of people of all political stripes.

A poll conducted in 2017 found that 90% of participants at a high-profile Republican conference opposed Adelson trying to ban online gambling controlled by the states. Some called his efforts a brazen attempt to subvert the U.S. Constitution, infringing on states’ rights.

After federal legislation failed, the peak of his fight against regulated online gaming was persuading the Trump Department of Justice in late 2018 to go back on an Obama-era interpretation of the 1961 Wire Act, calling into question all gambling that takes place across state lines, potentially even threatening lucrative state lotteries. It was an extremely controversial reversal by the federal government in the eyes of legal experts, and especially in the eyes of the state of New Jersey, and so far it hasn’t held up in court, though a final word on the Wire Act saga has yet to be handed down.

In the meantime, states have continued to legalize online casino gaming and poker, but the hot vertical right now is sports betting. Adelson’s company is involved with online sports gambling in Nevada, another eyebrow-raiser for online gaming proponents.

How significant is his death in 2021?

Nearly eight years after the Forbes op-ed and following the Supreme Court’s 2018 ruling on PASPA and a Joe Biden victory in the 2020 presidential election, Adelson, a GOP megadonor, was seeing his influence on the online gambling issue waning. The American Gaming Association, the casino industry’s top lobbying group on Capitol Hill, is all in on online sports betting, considered the gateway to state approval of other forms of online gaming.

Sports betting, even online, is a low-margin offering, with many of the sports betting firms operating in the U.S. also involved heavily with online casino. The dam for online gaming has been broken, and though in many ways Adelson was successful at delaying its rollout, it wasn’t a battle he could ultimately win. The COVID-19 pandemic could also usher in more states looking at bringing more gambling online.

Adelson’s death comes just weeks before the state of Michigan is expected to launch online casino gaming, becoming just the sixth state to do so. (Note that Nevada, one of the six, allows poker and sports betting only.) Other states are expected to consider the activity this year.

The effects of his efforts to delay the regulation of online casino gaming, which currently happens via numerous offshore platforms that offer little if anything in the way of consumer protections, will take some time to shake off, but the tides are changing. At a recent digital conference, an executive with MGM Resorts International said that within 10 years there will be online poker with liquidity sharing nationwide.

Poker players will never know how many years worth of delays can be attributed to Adelson personally (California, for example, couldn’t get online poker done due to stakeholder legislative battles), but his stances and efforts ensure that he will remain a polarizing figure in the gaming world for a long time to come.