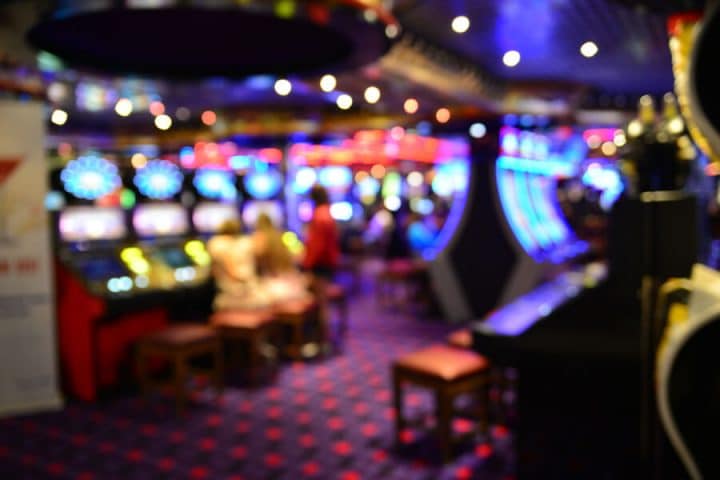 Amid the politicization of the COVID-19 crisis, the U.S. casino industry is starting to reopen its doors.

While online casino gambling is growing in states where it’s legal, the vast majority of retail casinos remain closed. That’s slowly changing. As of Thursday morning, 23 casinos in the U.S. had reopened, according to tracking from the American Gaming Association, the industry’s leading trade group in Washington, D.C.

It’s a brutal situation for those working in the industry. According to the AGA, more than 750,000 people work at roughly 1,000 casino properties nationwide. The U6 unemployment rate in the country currently stands at 22.8%, and a record low percentage of Americans have work right now.

More than 200,000 casino employees in Nevada alone are out of work. Many have been furloughed.

The reopening of state economies, which includes casinos, amid a deadly pandemic speaks to the dire economic emergency. Casinos are reopening with extensive safety precautions such as body temperature checks and the widespread use of masks, but it’s too early to tell how effective they will be and whether the properties will have to close again if death rates spike this summer.

The US unemployment numbers are terrible but ever more telling is the employment to population ratio which has fallen to historic low of 51.3%. https://t.co/K0wTIyIWz8 pic.twitter.com/I6btL9LQg8

On Wednesday during the ICE North America Digital conference, a panel of experts discussed some of the ways casinos are trying to mitigate the dangers while resuming their respective businesses.

Kelley Tucky, a strategic communications consultant, said on the panel that it’s a precarious time for the industry. “The villain is still at large,” she said. “The virus is still there.”

Tucky advised casino operators to pay close attention to their public image during this critical time.

Most of the country is concerned that states are reopening too quickly, according to the latest polling.

It’s a risky bet for casinos, but it’s one the industry is willing to make.

“Guests are watching how you treat your employees, and if a guest feels your employees’ concerns aren’t being heard, then they’ll make the determination if they’re going to reconnect with you,” Tucky warned casino operators. “Safety and security is the No. 1 thing, making sure your people are put over your profits in this important stage.”

Las Vegas Mayor Carolyn Goodman didn’t get the memo in April, leading to calls for her to resign.

MGM Resorts indicated this week that it is looking to resume scaled-back operations in Las Vegas in as soon as a few weeks. The company on Tuesday released a “seven-point safety plan.”

Las Vegas' Casinos face a unique set of challenges as they try to get back to business. MGM resorts CEO BIll Hornbuckle warns that they could look very different when they do open up, "it will be different but we still think it can be meaningful." pic.twitter.com/gc8i511Czp

One Las Vegas Strip eatery is planning to reopen next week, which will get the reopening ball rolling.

Peppermill Las Vegas, the stalwart fixture on the Strip, is planning to reopen on Friday, May 22, with precautions in place for COVID-19. https://t.co/JQ70ixY3oc

Will the gamblers return?

As the Pew Research Center indicated, patronage to recently reopened casinos could largely fall along party lines amid the polarized political environment in a presidential election year.

It also depends on age, according to a survey released this week by Synergy Blue, a casino games maker that apparently would benefit from properties being reopened. The survey, which should be taken with a grain of salt, looked at the sentiment of 1,000 gamblers in late April. 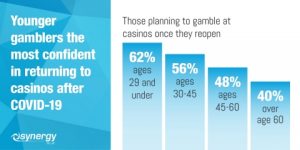 Though the virus poses a severe health risk to casino visitors of all ages, health experts have long stated that COVID-19 is deadlier for older folks, especially those with a pre-existing health condition. The survey appears to back up that public perception, as younger gamblers were found to be more willing to visit a casino property more or less immediately after it reopens. The willingness to visit declines with age.

The survey also found that of those who are not planning to resume casino visitation or unsure about it, 58% cited economic reasons. While the stock market has rebounded greatly since mid-March, it still appears shaky and there’s much uncertainty about the economy going forward in 2020.

55% of Americans say the condition of the global economy is a major threat as the economic fallout from the COVID-19 crisis becomes clearer.https://t.co/fv0T32cW1R pic.twitter.com/rMcDPeGGqQ