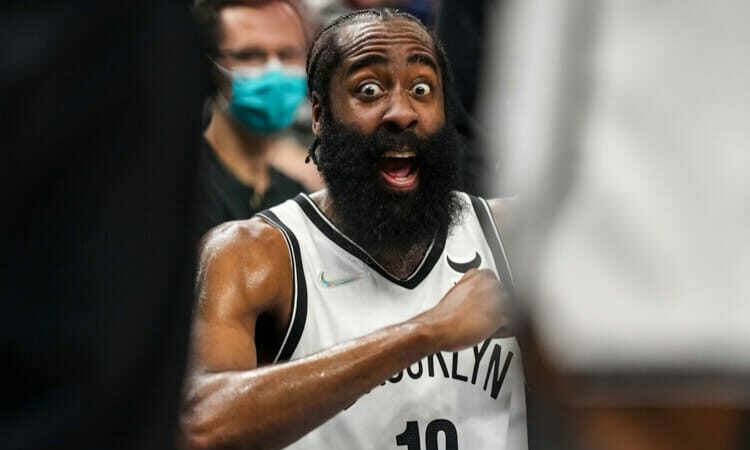 Let’s not bury the lead here: By far the biggest news on NBA trade deadline day, for sports bettors and fans alike, was the deal that sent perpetually petulant James Harden and Paul Millsap from the Brooklyn Nets to the Philadelphia 76ers in exchange for season-long holdout Ben Simmons, Seth Curry, Andre Drummond, an unprotected 2022 first-round pick, and a protected 2027 first-round pick.

As Eric Raskin wrote over at US Bets’ sister site Penn Bets, “Debate over whether the Sixers gave up too much has already begun and could continue for years … but from a ‘win now’ perspective, the 76ers appear to have nailed it.”

Sportsbooks agreed with Raskin’s assessment in unison Thursday, basically halving the Sixers odds to win both the NBA title and Eastern Conference. While the Nets’ odds to win it all grew slightly longer at every book, ranging from 3/1 at DraftKings to +450 at PointsBet, Philly’s odds went from 14/1 on Tuesday to 7/1 after Thursday’s trade, with PointsBet shifting the Sixers all the way from 12/1 to +550.

FanDuel assigned the Sixers +650 odds of winning the East on Tuesday. After they acquired Harden, the sportsbook moved them to +240, trailing only the Nets, whose odds were adjusted from +185 on Feb. 8 to +210 after the deal. While most sportsbooks still have the Nets as a narrow favorite to win the conference (and the NBA title), PointsBet puts them in a dead heat at 3/1 alongside the Sixers and Milwaukee Bucks.

If Harden plays to the peak of his capabilities, the Sixers’ odds adjustment certainly seems warranted. But the Nets? Absolute tire fire — Lakers East. They’re parked at eighth in the conference — play-in, baby! — after losing 10 straight games, and it’s anyone’s guess as to how long it will take Simmons to work his way into game shape. Meanwhile, Kevin Durant is expected to be out for a couple more weeks with a knee injury, and unvaccinated wackadoo Kyrie Irving is still only legally allowed to play road games. If you’re a Nets believer, it might be worth waiting until this team’s title odds fall more in line with where the Sixers’ are at before getting some action down.

Reigning NBA champion Milwaukee was among a handful of teams that made sharp, under-the-radar moves on Thursday, acquiring Serge Ibaka from the Clippers while shipping Donte DiVincenzo, Semi Ojeleye, and Rodney Hood to the Kings in a four-team trade. At 32 and with championship pedigree, Ibaka gives the Bucks’ rotation another big, athletic option while Brook Lopez continues to recover from a back injury, and the solid play of off-guards Pat Connaughton and Grayson Allen had made DiVincenzo expendable.

It was a minor trade, to be sure, but one that improves the defending champ’s roster. Sportsbooks reacted by not reacting at all, with the Bucks’ title odds still sitting at a juicy 7/1 at DraftKings, FanDuel, and PointsBet.

Toronto was another playoff contender that made a minor move that could have a major impact, acquiring forward Thaddeus Young from the Spurs in exchange for Goran “Grumpy Pants” Dragic, who only played in five games for the Raptors after pissing and moaning about his trade there from Miami this past offseason. Young was fairly open about his desire to be dealt to a contender, but was far more gracious about it. A poor man’s Draymond Green, the versatile veteran will provide a nice boost to Toronto’s second unit.

Winners of eight straight, the Raptors are currently the antithesis of the Nets, whom they lead in the Eastern Conference playoff standings. In spite of this, Caesars shifted the Raptors’ odds to win the conference from 33/1 on Tuesday to 50/1 after Thursday’s deadline, while PointsBet took quite the opposite view, moving Toronto’s odds from 50/1 to 25/1 after the Young pickup.

PointsBet also really liked what the Celtics did on Thursday, nearly halving Boston’s odds to win the Eastern Conference from 22/1 to 12/1 after the Celtics acquired productive combo guard Derrick White from the Spurs and then reacquired Coldplay’s lead singer, Daniel Theis, from the Rockets. (Theis is actually an energetic big who’s played for the Celtics before, but if Chris Martin ever needs a stand-in, Dan’s the man.)

This duo didn’t come cheap, as Boston shipped out Josh Richardson, Dennis Schroder, Romeo Langford, Enes Freedom (nee Kanter), Bruno Fernando, and a protected first-rounder in the two deals and Bol Bol and P.J. Dozier in another that amounted to a salary dump. But the Celtics, winners of six straight and sandwiched between the Raptors and Nets in the standings, emerged from Thursday’s deadline with a stronger rotation and a few empty roster spots that should come in handy when the buyout market (Dragic will be there!) heats up.

So if you think they now have what it takes to run the table in a relatively wide open conference, head over to FanDuel and grab the C’s at 27/1 to win the East.