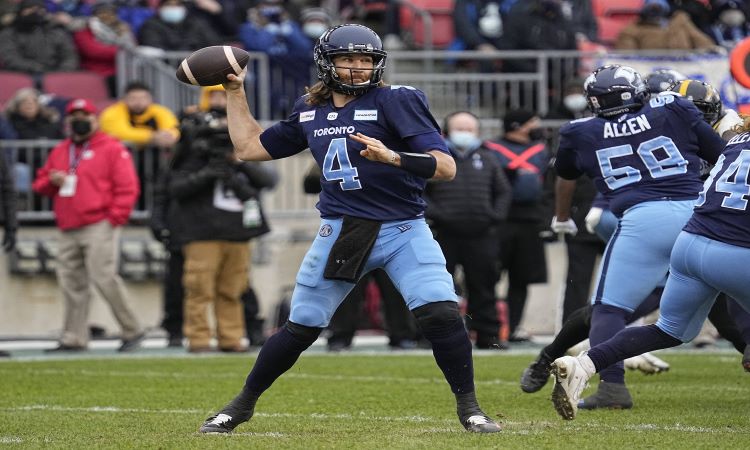 The Canadian Football League’s regular season got underway last week with four exciting opening-week matchups, and it appears scoring is on the rise this year. After a number of rule changes intended to inspire more offense, the four games combined to average 52.5 points, much higher than the league’s 43.1 points-per-game average from last season.

The BC Lions inflated that overall scoring average by putting up a whopping 59 points against the Edmonton Elks last Saturday night, but it’s important to note the small sample size before jumping to any conclusions that this year will be full of offensive fireworks. Oddsmakers appeared ready for the boost in scoring, as the over/under went an even 2-2 in Week 1.

All odds in this article courtesy of PointsBet.

Montreal suffered a huge blow when lead back William Stanback suffered a serious ankle injury in the team’s Week 1 loss to Calgary. Stanback underwent surgery on Monday for a fractured ankle and will likely miss the remainder of the season, although there is a slight chance he’ll be able to return late in the campaign.

The 27-year-old, who is coming off back-to-back 1,000-yard rushing seasons, is widely regarded as one of the best at his position. Now the pressure will be squarely on dual-threat quarterback Vernon Adams, who threw for 250 yards with a touchdown and a pair of interceptions on just 18-of-32 passing last week, to carry the offense moving forward.

The Argonauts finished first in the East Division standings last year and just missed out on a Grey Cup berth thanks to a late-game collapse against Hamilton. Toronto added more firepower this offseason, bringing in 2019 Most Outstanding Player Brandon Banks and the league’s leading rusher in 2019, Andrew Harris.

Toronto had a Week 1 bye and didn’t take the field, but its Grey Cup odds still shortened from +600 to +475 after the first week. Bettors clearly like this team’s chances to compete for a championship again this season.

The back-to-back defending Grey Cup champion Blue Bombers were lucky to come away with a 19-17 home win over the improved Redblacks in Week 1. The Redblacks generated more offense than the Blue Bombers (431-289 net yards), which was shocking given Winnipeg’s dominance of the league last year.

The Bombers defense will be bolstered, though, by the likely return of defensive end Jackson Jeffcoat, who missed the season opener with an ankle injury. He earned All-Star honors last year after racking up nine sacks and 26 tackles in 12 games. Quarterback Zach Collaros took a hit to the head in Winnipeg’s Week 1 victory, but he was back at practice Tuesday and is ready to go this week.

A major roster overhaul in the offseason has Ottawa believing it can compete this year after finishing with a league-worst 3-11 record last season. New quarterback Jeremiah Masoli threw for 380 yards and a touchdown in the season opener against one of the best defenses in the league, and receiver Jaelon Acklin caught six passes from his former Ticats teammate for 143 yards.

The Redblacks were seven-point underdogs in Week 1 against the Bombers, and oddsmakers are giving them a little more respect in the second half of this home-and-home set with Winnipeg, moving their number to +3.5.

The #TotalEnergiesCanada Weekly Picks courtesy of our writers.

Calgary earned a slim 30-27 victory against the Alouettes in its season opener, but quarterback Bo Levi Mitchell rolled his ankle and had to leave the game in the fourth quarter. He’s out of his walking boot and back doing drills with the team this week, but his status is still questionable for Saturday’s game in Hamilton. The 32-year-old finished the game with 199 passing yards, one touchdown, and one interception before being relieved by backup Jake Maier.

For Hamilton, Dane Evans stumbled in his first game since being handed the undisputed No. 1 quarterback job with the departure of Masoli in the offseason. He committed four turnovers and was sacked eight times by a potent Saskatchewan defense, but Hamilton was still able to keep the game close until the fourth quarter, when the Roughriders erupted for 18 points. With one of the best fan bases in the league, Hamilton should rebound in its home opener Saturday in what should be the closest game of the week.

The Roughriders’ defense was stellar in their home opener last Saturday, recording five takeaways and eight sacks. Quarterback Cody Fajardo threw for 311 yards and a touchdown in the victory and he’ll have some extra motivation to stick it to the Elks this week.

This offseason, Elks head coach Chris Jones said Fajardo “wasn’t a top-five passer in the league.” Fajardo responded this week by saying, “There’s always added motivation when someone doesn’t think you’re as good as you think you are.”

Edmonton returns for its home opener this week after getting thoroughly embarrassed by the BC Lions in its season opener. The Elks defense coughed up 469 yards of offense to the Lions in the 59-15 thrashing, and Edmonton quarterback Nick Arbuckle threw three interceptions. After posting a dismal 3-11 record last year, Edmonton looks like a bottom-dweller again this season.