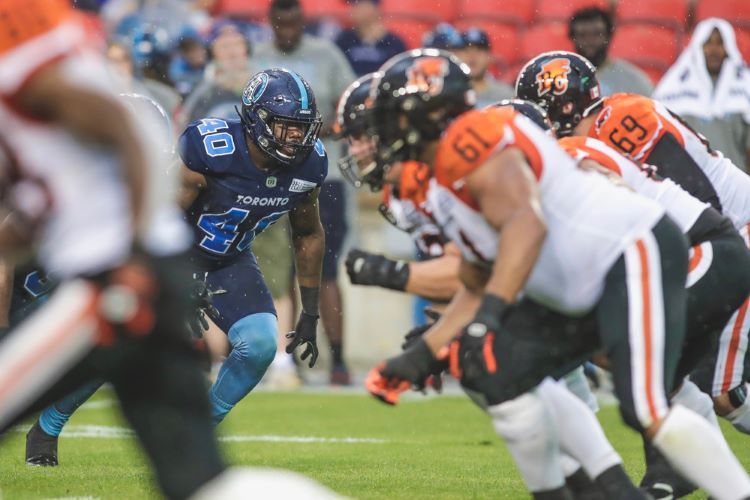 Two weeks of Canadian Football League action are now in the books, and it’s been very difficult to handicap the games, as teams continue to adjust to some key rule changes.

Scoring is up to 48.1 points per game (the average was 43.1 points per game last year), but that’s only resulted in a 3-5 over/under record through two weeks of play. Underdogs are 4-4 against the spread to this point, and East Division teams have been awful, posting a combined 1-6 record straight-up.

Week 3 in Canada is full of intriguing East/West crossover matchups and the Ottawa Redblacks will enjoy a bye week. Here’s a look at the latest CFL Grey Cup outright odds followed by our Week 3 betting preview:

All odds in this article courtesy of PointsBet.

The Roughriders have opened the season with back-to-back wins against Hamilton and Edmonton, and they covered the spread easily in both of those contests as favorites.

Last week, running back Jamal Morrow rushed for 126 yards and a touchdown, and chipped in with 57 more yards on returns. However, starting center Dan Clark broke his fibula in the victory over Edmonton and will likely miss the remainder of the season. He’s the veteran leader on the team’s offensive line and he’ll be sorely missed.

Saskatchewan’s defense has been stout early on, recording a league-high 13 sacks while holding opponents to 14.5 points per game. However, the Riders will be traveling across the country to play in Montreal on Thursday after playing last Saturday. With only four days to recover, the defense could be slightly fatigued.

The Alouettes were close to winning their Week 2 matchup with Toronto until second-year kicker David Cote hooked a 21-yard field goal attempt with 14 seconds remaining in the fourth quarter that would have given them the lead. Head coach Khari Jones made a controversial decision to pull his struggling dual-threat starting quarterback, Vernon Adams Jr., early in the game in favor of pocket passer Trevor Harris. The move inspired Montreal’s offense, but the team ultimately came up short to fall to 0-2 (but 2-0 ATS) on the campaign.

There will be no quarterback controversy this week, though, as Adams Jr. tested positive for COVID-19 and will not dress.

Thursday will mark Montreal’s home opener, and the injury-ravaged squad will be desperate for a win to avoid falling to 0-3 on the season. The Alouettes are still mourning the loss of starting running back William Stanback, who suffered a serious ankle injury in Week 1.

David Cote MISSES his 1st field goal of the night from 21 yards away in the dying seconds of the 4th quarter.

The Argonauts hang on and win their home opener, 20-19 final.#CFL pic.twitter.com/3IHNsKJqY2

After making back-to-back Grey Cup appearances, many bettors had Hamilton as the frontrunners to once again prevail in the East Division, but nothing has gone according to plan through the first two games.

The Tiger-Cats led the Stampeders 24-3 at halftime last week, but got outscored 27-6 in the second half, eventually falling in overtime to drop to 0-2 on the season. Even more concerning, starting quarterback Dane Evans, who completed 36 of his 51 passes for 425 yards with three touchdowns and two interceptions in the loss, hyperextended his knee. He’s been limited at practice this week and bettors will want to monitor his progress leading up to game time. If he can’t suit up, this spread will be drastically on the move in favor of the Bombers.

Winnipeg is 2-0 (1-1 ATS) after opening the season with a home-and-home series with the Ottawa Redblacks. It’s no surprise that the Bombers took both of the meetings, but it wasn’t as easy as many expected against an improved Ottawa team.

Winnipeg’s defense has allowed a league-worst 355.5 passing yards per game, but that hasn’t translated into scoring, as the club has limited opponents to only 29 points through two games. It appears there may be some chinks in the armor of this defense after two dominant seasons resulting in Grey Cup championships, so it’ll be interesting to see how the unit responds against Hamilton’s aerial attack, assuming Evans plays.

There’s not much to like about the Elks after two games. They were routed 59-15 by the Lions in Week 1, and then fell 26-16 to the Roughriders last week.

Edmonton has now lost nine straight regular season home game games dating back to last season, and a tough matchup with the undefeated Stampeders in Calgary is next. The Elks defense has been dreadful against the run, allowing 371 yards on the ground over its first two games.

Meanwhile, Calgary has mounted back-to-back come-from-behind victories against Montreal and Hamilton. This week, Calgary is the biggest favorite on the board and is also facing the highest total.

The health of starting running back Ka’Deem Carey will be a crucial factor in handicapping this game. He exited last week’s contest with an apparent Achilles injury, and could put up huge numbers against the Elks, if he can recover by Saturday.

This is perhaps the most intriguing contest of the week, as both teams have played just one game apiece so far due to early byes.

Toronto was lucky to come away with a one-point victory in its home opener last week against Montreal, but there were some positive signs from its two newest additions. Receiver Brandon Banks, the CFL’s 2019 Most Outstanding Player, found the end zone, and veteran running back Andrew Harris looked very impressive, rushing for 87 yards on 18 attempts while catching three passes for an additional 23 yards. However, Harris left the game with hamstring tightness, so that’ll be something to monitor heading into this week’s showdown with the Lions.

I threw my back out just watching this play, but Andrew Harris is still out here doing it live at 35… 🐐 #CFL #Argos #PullTogether
pic.twitter.com/e0bG3ztxik

Was BC’s first-week offensive explosion a fluke? And will a second-week bye halt any momentum the team built in its season opener?

Canadian quarterback Nathan Rourke looked awfully good in his debut as the clear-cut starter for the Lions, passing for 282 yards and collecting five touchdowns — three passing and two rushing — in the rout of the Elks in Week 1. The Victoria, B.C., native assumed the QB1 job after veteran Mike Reilly retired and he looked like the real deal in Week 1, but keep in mind the offensive fireworks came against the lowly Elks.

Running back James Butler also found the back of the end zone four times and amassed 108 yards on the ground in the season opener, balancing out the offensive attack for the Lions. This spread is already on the move early in the week, with some sportsbooks shifting to BC -4.5 after opening at -2.