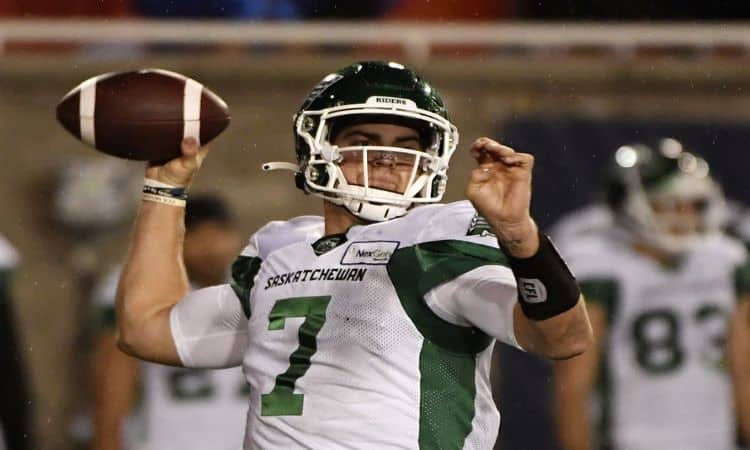 We’re nearly a third of the way through the CFL regular season schedule and the West Division continues to dominate, led by the undefeated Winnipeg Blue Bombers.

West Division teams have a combined record of 19-8 to this point; East Division squads are just 4-15 combined.

All odds in this article are via PointsBet.

About the Alouettes (1-4 straight up, 3-2 against the spread, 4-1 O/U): This will be the first of four meetings between Montreal and Ottawa this season. The teams also met four times last year, with the Alouettes winning the first three games.

Montreal is coming off a 32-31 loss to Edmonton last Thursday on the heels of firing head coach Khari Jones and defensive coordinator Barron Miles a couple weeks ago. They took 13 penalties in the loss for a whopping 193 yards and coughed up a 19-point lead.

The Alouettes did make a potential splash this week, though, by acquiring the rights to offensive lineman Laurent Duvernay-Tardif, who formerly played for the NFL’s Kansas City Chiefs and New York Jets. Duvernay-Tardif is still hoping to sign with an NFL team, but he’ll have Montreal as a fallback option if things don’t work out, and the Alouettes could desperately use the protection help.

We have just acquired the rights to offensive lineman Laurent Duvernay-Tardif! If he plays in the CFL, he’ll be doing so in his own backyard! 👉https://t.co/6zeMGO75xL pic.twitter.com/Vxqs8Q7f5P

About the Redblacks (0-5 SU, 2-3 ATS, 2-3 O/U): Ottawa allowed a game-winning touchdown pass with 19 seconds remaining last week against Hamilton to remain winless on the season.

A Week 5 knee injury sidelining quarterback Jeremiah Masoli for up to three months was completely demoralizing for the team, which was showing signs of improvement after a dismal 3-11 campaign last year.

Redblacks General Manager Shawn Burke acquired Nick Arbuckle from Edmonton to step in for the injured Masoli, and Arbuckle could be close to making his Ottawa debut after getting first-team reps at practice early this week.

It’s important to note that Ottawa, which played last Saturday, has a short turnaround before Thursday’s clash with well-rested Montreal.

Quarterback Dane Evans completed 21 of his 28 pass attempts for 342 yards and two touchdowns. After throwing eight interceptions in the first four games, Evans didn’t throw a pick in Week 6.

Hamilton’s defense, which is allowing 28.2 points per game (second worst in the league), will be without stud linebacker Simoni Lawrence for at least a few games. Lawrence, who has played 131 games over nine seasons with the Ticats and ranks first in franchise total tackles with 628, is on the six-game injured list with a groin ailment.

It’s worth noting that Hamilton has failed to cover the spread in each of its five games to this point.

About the Lions (3-1 SU, 3-1 ATS, 3-1 O/U): The Lions have looked spectacular early this season and they’ll be coming out of their second bye week hungry to pick up where they left off.

Canadian quarterback Nathan Rourke is torching opposing defenses this season, leading the Lions to a league-best 39.8 points per game. With plenty of time to prepare for a pedestrian Hamilton defense, Rourke and the BC offense could be poised for another big week. Rourke has completed 104 of his 130 passing attempts for 1,355 yards and 12 touchdowns through four games. He’s also rushed for an additional 180 yards and three scores.

About the Blue Bombers (6-0 SU, 4-2 ATS, 2-4 O/U): The Bombers looked solid, but beatable, after four games, but then they turned up the heat and handed the Lions and Stampeders their first losses of the season in consecutive weeks to remain undefeated.

Winnipeg, which has won back-to-back Grey Cup championships, is 6-0 for the first time since 1960 when that Bombers team opened the season with 10 straight wins.

Former Edmonton receiver Greg Ellingson is thriving in his new offense in Winnipeg. The veteran’s 34 receptions and 518 yards are both tops in the league, while he’s tied for second with three touchdown grabs.

Instability at quarterback has been a major issue for the Elks this season after Tre Ford’s shoulder injury and the Arbuckle trade, but Taylor Cornelius completed 19-of-31 passes for 230 yards with one touchdown and one interception in his first start last week.

Elks receiver Kenny Lawler was named a CFL top performer for Week 6 after catching seven passes for 92 yards and scoring his third touchdown of the season. He leads the Elks in receiving with 384 yards and ranks first in the league in targets (54) and second in receptions with 33.

About the Argonauts (2-2 SU, 2-2 ATS, 2-2 O/U): Toronto toughed out a 30-24 victory over the Roughriders in the Touchdown Atlantic game in Nova Scotia last week and now both teams will travel to Saskatchewan for a rematch in Week 7.

Last Saturday’s game was an undisciplined affair with the teams combining for 25 penalties for a lofty 285 penalty yards (Toronto had 14 for 153 yards and Saskatchewan committed 11 for 132 yards). Riders receiver Duke Williams picked up Argos defensive back Shaq Richardson’s helmet and threw it at him during pregame warmups, setting the tone for the gritty game.

I don’t know how this started, but you have to think a suspension is coming. This is not what the league wanted to see in pregame warmup. pic.twitter.com/0JUdltj1eT

The league is still reviewing the incident and there’s no word on any potential suspension or fines for the players involved.

About the Roughriders (4-2 SU, 4-2 ATS, 3-3 O/U): Riders quarterback Cody Fajardo has a 50-50 chance of suiting up in Week 7 as his ailing left knee continues to be an issue. He’s been wearing a brace on the injured knee since Week 2, and his mobility has been limited since he sustained the injury. The 30-year-old completed 24-of-34 of his passes for 284 yards, two touchdowns and three interceptions last week, and bettors will want to monitor his status throughout the week.

In addition to the uncertainty at quarterback, Saskatchewan is also dealing with a COVID-19 outbreak. Practice was canceled Tuesday as a number of players and support staff tested positive for the virus. It’s unclear how many players won’t be able to suit up, but it’s certainly an issue to watch leading up to kickoff.