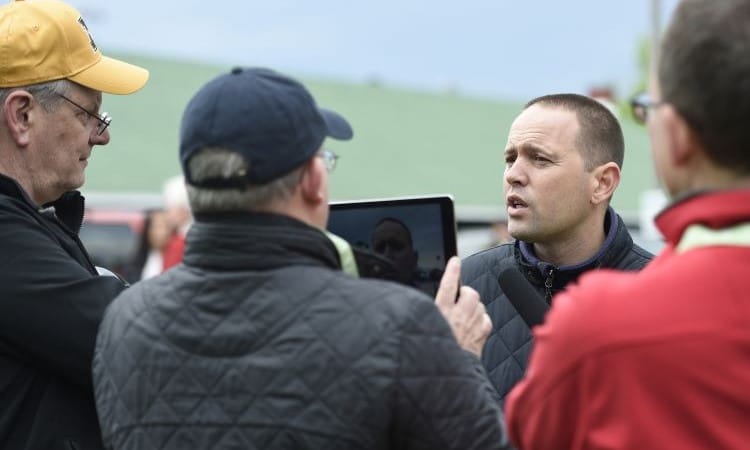 Eclipse Award-winning thoroughbred trainer Chad Brown pled not guilty Thursday to a misdemeanor charge of criminal obstruction of breathing in connection with an alleged domestic incident at his Saratoga County (New York) home on Wednesday.

Brown, 43, allegedly pushed a woman down a flight of stairs, pinned her to the ground, and tried to choke her before pushing her out of his home, a local prosecutor told a Saratoga Springs city judge at Thursday’s arraignment. Brown, the leading trainer at the 2022 Saratoga summer meet, was released around noon Thursday after posting bail of $2,500.

Oxymore, a Brown-trained 2-year-old gelding, is the 9/5 morning line betting favorite in Friday’s feature, the $150,000 Skidmore Stakes. On Saturday, Gerrymander, another member of Brown’s barn, enters the prestigious Grade I Alabama Stakes as the 7/2 second choice.

Joseph Gerstenzang, Brown’s attorney, argued that the trainer attempted to defend himself from a home intruder. The alleged victim entered the home late at night, woke up the trainer, and physically attacked him, the attorney added.

“The wrong person was arrested here,” Gerstenzang said during the arraignment.

Brown did not speak to reporters as he left the courtroom on Thursday. Two horses trained by Brown finished out of the money on Thursday’s card at Saratoga.

Citing court records, WNYT Channel 13 in Albany reported that the alleged victim had a key to Brown’s home and let herself in around 11 p.m on Wednesday. The woman, who described herself as Brown’s “on again, off again” significant other, allegedly confronted the trainer after she spotted him in bed with another female, according to the filing.

“He applied pressure to my neck while I was on the floor,” the alleged victim told police.

Judge Francine Vero ordered Brown to remain away from the alleged victim except at the Saratoga Race Course, where both work. Court filings indicate that the victim was identified as an assistant trainer who works on the Saratoga backstretch, multiple outlets reported.

The New York Racing Association said in a statement that it was aware of Brown’s arrest, but declined further comment.

Nest, the Belmont Stakes runner-up, has been installed as the heavy 1/2 favorite in the $600,000 Alabama, a Grade I stakes for 3-year-old fillies.

In her last start, Nest scored a resounding 4 1/2 length victory in last month’s Grade I Coaching Club American Oaks at Saratoga. Nest, a 3-year-old daughter of Curlin, recorded a career-best 110 Equibase speed figure in the defeat of Kentucky Oaks winner Secret Oath. Trained by D. Wayne Lukas, Secret Oath is the 4/1 third choice in the Alabama.

Those ears, that watchful eye…it can only be NEST ✨ The GI CCA Oaks winner will face off with six others in Saturday's GI Alabama at Saratoga, including D. Wayne Lukas trainee Secret Oath. pic.twitter.com/wHGkWfer88

Gerrymander is coming off a three-length win in June’s Grade 2 Mother Goose Stakes at Belmont. Gerrymander, who has three wins in six career starts, has never run beyond 1 1/16 miles. Contested at the classic distance of 10 furlongs, the Alabama favors horses with considerable stamina. It is not immediately known if Brown will attend The Alabama.

Brown, a four-time Eclipse Award winner for trainer of the year, has never won the prominent race, despite holding the Saratoga record for career victories by a trainer with 419. A native of Mechanicville, New York, Brown grew up about 20 miles from the famed track.

As of Friday, Brown led the Saratoga trainer standings with 27 wins in 114 starts. He also has three probable entrants in the Grade I Travers Stakes on Aug. 27, including Early Voting, the reigning Preakness winner. Brown is among the top trainers nationwide in earnings this year with $19.8 million.

On the same night of the incident at Brown’s home, two licensed grooms at Saratoga Race Course were arrested on charges of cocaine possession.

The grooms were ensnared in a sweep of the dorms on the backstretch area of the track by the Saratoga Springs Police Department’s special investigations unit. The two men allegedly possessed more than 200 grams of cocaine, according to Saratoga police. Jose Hidalgo, 59, and Guadalupe Montesdecoa-Aguilar, 36, were booked on two felony drug-related charges, including criminal possession of a controlled substance with intent to sell.

The two grooms have worked at some point for veteran trainer Charlton Baker, the Albany Times Union reported. Baker has not been implicated in the sweep.

Due to the severity of the charges, the two men were being held at the Saratoga City Jail without bail. The arrest is at least the second involving alleged narcotics trafficking at the race course over the last five years.

A former employee of Saratoga Race Course was sentenced in 2020 to 65 months in federal prison in connection with the sale of 400 grams of crystal methamphetamine. The worker, according to the Times Union, admitted to hiding illicit drugs in numerous areas of the track, most notably in his dormitory.