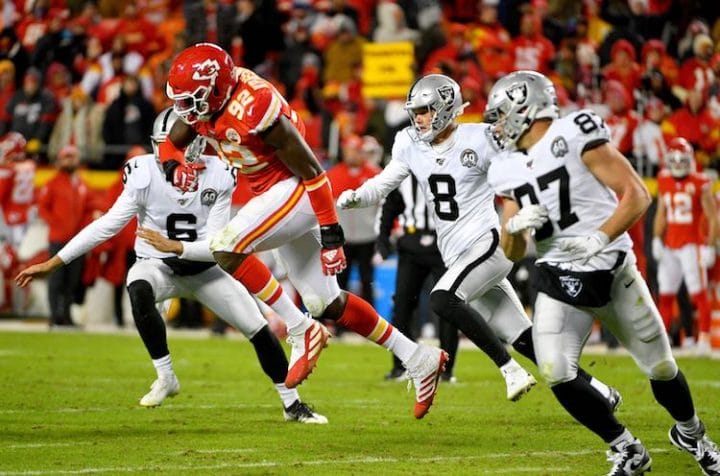 There are bad beats, there are devastating beats, and then there is the cruel daily fantasy sports-style fate suffered by “Carney259,” whose theoretical net worth plummeted $960,000 (before taxes) as a result of a rare, fluky, and otherwise meaningless play during NFL’s Week 13 on on Sunday, December 1.

As you may have heard by now, at the end of Kansas City Chiefs-Oakland Raiders tilt, specifically the blocked extra point attempt returned by Kansas City defensive back Charvarius Ward for two points and a 40-9 Chiefs lead, resulted in Carney259 (real name Mike) winning $40,000 for third prize in the DraftKings Millionaire Maker contest instead of $1,000,000.

Of course, thousands of other events resulted in his lineup, led by an Eagles stack of Carson Wentz, Alshon Jeffery, and Miles Sanders, surging to 228.40 points and the top of the standings as the afternoon slate of games crept toward 0:00. You may have heard about it, but the full story and Mike’s game-day experience — doubling as an in-flight experience! — as he explains in detail to RotoGrinders’ Dan Back on SiriusXM, is better. Have a listen:

Among the thoughts swirling through Mike’s head as he began to fancy a $1 mm check with his name on it:

Alas, he’s taking it quite well — as well as you could expect. He wrote on the RG forums:

that’s DFS. If I’d have held on and won, second place probably could have found a lucky bounce in a game somewhere that went my way too and cost him life changing money. But dude, when you open your app and live winnings are showing in the seven figures with a routine extra point to go, it’s brutal. I was up by a fraction of a point even before the OAK TD. The sweat was just hoping for no sack and no turnover on that last OAK possession. And of course they score the bonus TD I didn’t even need and give me a cushion of 3+ points only to shit the bed on the PAT and give back 4 points. Totally would have taken $40k when I woke up this morning, though.

Brett Smiley is editor-in-chief and co-founder of Sports Handle, which joined forces with the US Bets team in November 2018. He focuses on the sports betting industry and legislation. He's an avid sports bettor himself, mainly on NFL and college basketball contests. In a past life, Smiley practiced commercial litigation in New York City and previously wrote for FOX Sports and SI.com. He lives in New Jersey with his wife Michele, son Nolan, and their two English bulldogs, Chief and Boomer.