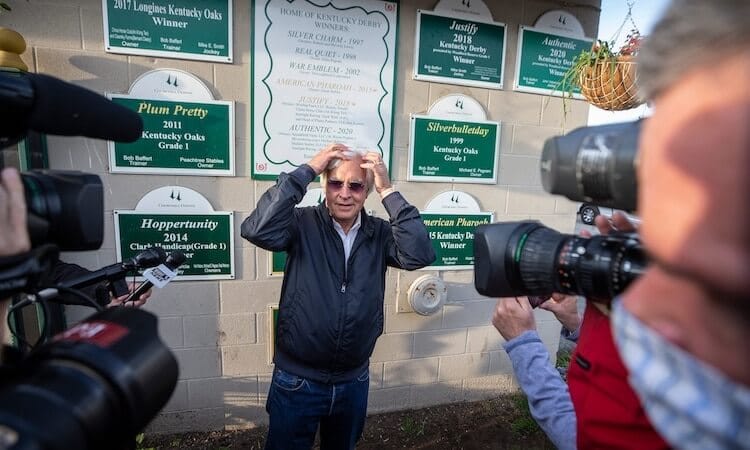 If Bob Baffert’s 90-day suspension in Kentucky for Medina Spirit’s positive drug test from the 2021 Kentucky Derby is not stayed through the court system by April 4, he will be forced to essentially disband his stable in California during the suspension, according to the regulatory agency that oversees horse racing in the Golden State.

California Horse Racing Board Rule 1843.3 states, in part, that “Licensed trainers suspended 60 days or more shall be banned from all inclosures under the jurisdiction of the CHRB. In addition, during the period of suspension, such trainer shall forfeit all assigned stall space and shall remove from the inclosures all signage, colors, advertisements, training-related equipment, tack, office equipment, and any other property.”

But there was some question until Tuesday if that rule only applied to suspensions issued by the CHRB or whether it applies to honored suspensions from other jurisdictions. States with horse racing regularly honor suspensions from other jurisdictions, but this added sanction was pondered by CHRB staff and counsel for months. On Monday, when Baffert’s attempt to stay his suspension was denied by Franklin County (KY) Circuit Court Judge Thomas Wingate, a CHRB spokesman said the regulatory agency has been “considering this issue for some time and [has] yet to announce a decision.”

On Tuesday, the CHRB issued a response that said the board’s “position is that Rule 1843.3 applies to violations that occur in California. However, in the absence of any clarifying language in Rule 1484, commonly known as the reciprocity rule, the CHRB intends to apply Rule 1843.3 in its entirety to Kentucky’s 90-day suspension of trainer Bob Baffert.”

Rule 1484 states, “If any applicant for a license or any licensee is under suspension, set down, ruled off, excluded from the inclosure, or otherwise barred from any racing occupation or activity requiring a license, it is prima facie evidence that he or she is unfit to be granted a license or unfit to hold a license or participate in racing in this State as a licensee during the term of any suspension or exclusion from racing imposed by any competent racing jurisdiction.”

Family, assistants would also be barred

Rule 1843.3 also prevents suspended trainers from transferring horses into the care of family members or “any other licensee who has been an employee of the suspended licensee within the previous year,” which prevents the common practice of having an assistant trainer take over a stable when a trainer is suspended.

Officials at Santa Anita Park, where Baffert is based, said the trainer has 50 horses stabled at the Arcadia track. About 25 are stabled at Los Alamitos Race Course, about 30 miles south of Santa Anita, according to officials there.

Baffert’s attorney, Clark Brewster, did not immediately respond to a request for comment Tuesday night.