On Tuesday, Chris Christie said that sports leagues are acting like bandits by seeking "integrity" fees and data mandates. 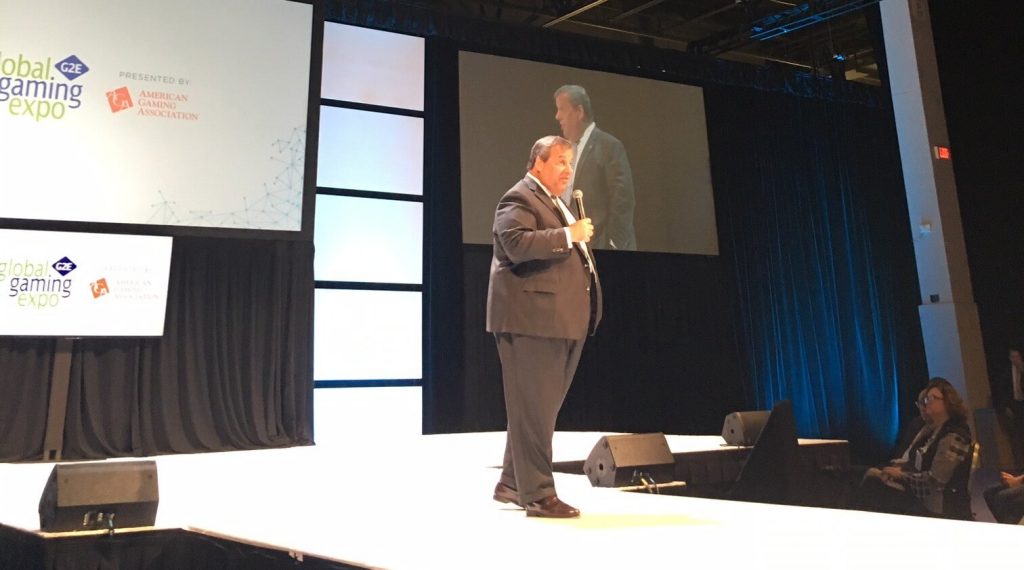 Legal, regulated sports betting has gotten off to a flying start across the U.S. in the 17 months since the Supreme Court opened the door for such activity.

“The first and most important thing is that we need to keep the federal government out of this business,” said Christie to applause from the crowd. “We’ve got to keep them out.

“With all that is happening in Washington, D.C. right now, does anyone think anything would be improved by the involvement of Washington?” Christie asked. “I don’t care whether you are Republican, Democrat, independent, or completely agnostic — I think one thing we all can agree on is that getting Washington involved in anything that really matters right now, is an absolute loser.

“So how do we avoid that? The only way is rigorous, responsible state regulation,” Christie added. “As I travel around the country talking about this issue, I tell state legislators and governors all the time: ‘You are the only ones who can screw this up.’ One scandal that traces its origin back to lax regulation will be the invitation that the federal government needs to get into this business.

Christie then narrowed his focus to one segment of the crowd.

“For those of you in this audience who are part of the regulatory bodies in this country: The successful growth of sports betting is on you,'” Christie said. “If you responsibly, reasonably regulate the industry to enhance growth and prevent scandal, the federal government will never have a talking point, an excuse, to get into this business.

Christie then asked the audience to help his sports betting legacy be a positive one.

“In the end, I don’t want to have fought for the last six years, and have it all turn into something bad,” Christie said. “And there’s no reason that it should. There is every opportunity to make something grow for our country. But it’s up to you in this room that will determine success or failure.

“What New Jersey did was give you this option, and now we can sit back and watch and see what you do with this opportunity.

“I came out here this week because I want you to know that as the person who had the great honor of leading the fight, that I am counting on you now. I’m out of office now — there’s not a damn thing I can do about it. You have all the authority, power, and knowhow to take this to the next level.”

Christie added that as a public figure for 15 years, the challenge was to avoid being burned by “unintended consequences.”

“There is always a truck coming in the the other direction that you didn’t see,” Christie said. “Do me a favor, as this nice, congenial guy that I am from New Jersey — don’t let me get hit by the truck.”

The introduction in the Senate earlier this year of a bipartisan — Democrat Chuck Schumer and Republican Mitt Romney sponsoring — sports betting bill doesn’t worry Christie, however.

“There are so many bigger issues in Washington, and politicians are always looking for a reason to do something. They need a hook — and I don’t see a hook right now.”

Asked if he had spoken to Schumer about the issue, Christie quipped, “You might be amazed to find out that Senator Schumer and I don’t speak very often.”

As for Romney, Christie said, “Schumer doesn’t surprise me; he’s never had to run anything in his life,” Christie said. “Romney does surprise me — but I’m sure there are reasons why.”

Christie said he looks back at the entire six-year legal saga fighting the NFL and four other sports organizations over the years as “insulting.”

“The leagues talked about the concept of seeing an impairment of the integrity of our games,” Christie said. “Imagine — they made this argument with a straight face. I remember talking to two of the commissioners one day when I ran into them at a restaurant in New York City while this whole thing was going on.”

“I said, ‘You’re saying that the state of New Jersey having sports betting in a regulated fashion with our casino partners, that would impair integrity,'” Christie added. “But when the Mafia and the illegal offshore business people run it, there’s no problem with the integrity of the game.”

Christie learning from his offspring

Christie, 57, clearly benefits in his gaming philosophy from having four adult children.

For instance, to underscore his mantra of “mobile is the future!” of sports betting, he cited his 26-year-old son as he pulled out a wad of cash from his pocket.

“My son doesn’t carry around any of this,” Christie said.

So when Christie’s son recently attended a wedding at a country club, when the valet came around with the car at departure time, his son said, ‘What’s your Venmo account?’ I don’t carry cash, but I want to tip you.

Christie didn’t directly refer to billionaire Sheldon Adelson — whose Venetian casino-hotel is hosting G2E this year even as his battle against online gambling in all forms continues — on the topic.

But Christie repeatedly stressed that the gaming industry has no choice but to soon yield to the lifestyles of young adults.

“If you don’t make mobile easily accessible to them, then they will not bet — they just won’t,” Christie said. “And don’t make go to a casino to sign up, or to collect their winnings. They just won’t use your product.”

Christie admits the idea of sold-out arenas full of people watching expert e-gamers — whether they wager or not — is beyond his grasp.

“I don’t get it, and I’m never going to bet on it as a matter of principle – and that’s okay, because I’m old,” Christie said. “But I’m sure that my kids probably will. We need to be out front of cultural trends, and provide entertainment options, so I have no problem with [regulated e-sports betting] even if I don’t know why you would do it.”

An even further-afield question — the future of cryptocurrency in the gaming industry — got Christie to demur.

What next for Chris Christie?

The warm, sometimes fawning welcome Christie gets at gaming industry events — plus rumors from earlier this year — led me to ask Christie if he has considered taking a full-time job in the gaming industry as the next chapter in his life.

“I don’t want a full-time job anywhere, man,” Christie replied. “Being governor of New Jersey — as you know, John — was like three full-time jobs at the same time. So no — I enjoy helping the gaming industry in ways that I can, because of my expertise. I have had opportunities I have not taken. I’m following a different model. And that model allows me … to spend more time with my family than I had gotten to do over the past 15 years.

“But John, if you have any references, I’m always willing to listen.”

Christie also said he has no issue with “arms-length” partnerships between gaming companies and sports leagues. But seeking state legislative mandates is a bridge too far, he said.

Christie on betting on U.S. elections

The recurring theme by Christie of allowing for all sorts of new gambling options wrapped up with a question on whether Americans could someday be allowed to bet on elections.

“Why not? I don’t see any reason why not,” Christie said. “It goes to the core of entertainment. If there is something that people want to wager on to make it more interesting — I don’t know how much more interesting Presidential politics can be right now, but if people want to bet, I don’t have a problem with that. I have seen it in Great Britain for along time,” added Christie, not mentioning that he was a co-favorite in 2011 in the United Kingdom and Ireland to earn the 2012 Republican Presidential nomination.