On Wednesday, a pro-tribal draft piece of legislation was made public, which would authorize online sports betting and online casino. 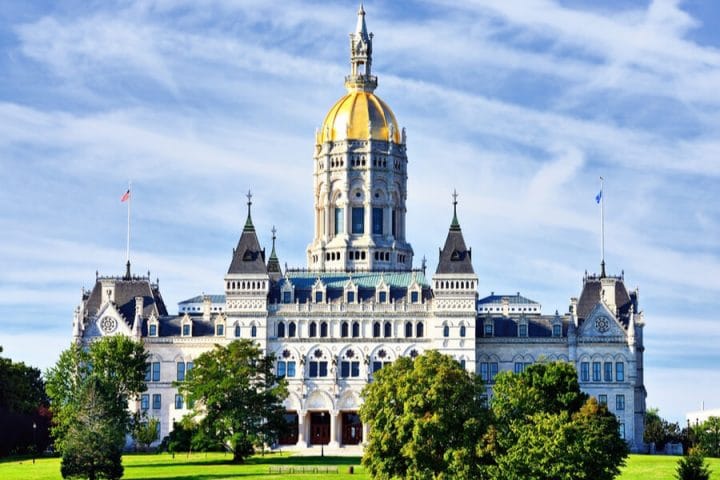 Could Connecticut join the growing list of states with online gambling? The Nutmeg State has flirted with legalizing online casino gaming for a handful of years and has long been a darkhorse for online poker.

The draft legislation represents a bipartisan compromise on expanding gambling in the state, under the tribal gaming industry operating within the state’s borders. A pair of tribes — Mohegan and Mashantucket Pequot — operate the Mohegan Sun and Foxwoods casinos, respectively. Under the proposed legislation, the tribes could also jointly operate new casinos in Bridgeport and East Windsor.

Connecticut lawmakers are not currently in session, so a special session would have to be called later this year to debate the bill, which hasn’t been formally introduced yet. The regular session ended in June.

It could also be officially filed in early 2020.

Under the proposed bill, online gaming revenue would be subjected to a 10% tax, while retail sports betting would fall under an 8% tax rate. Those are industry-friendly rates.

The bill doesn’t have any licensing fees.

The 37-page draft legislation was authored by Sen. Cathy Osten, a Democrat from Sprague.

Games that would be allowed

Under the proposed law, online casino gaming would include “any game of chance,” including, but not limited to, the following offerings:

The bill is light on sports betting details. The bill in its current form would only prohibit bets on high school events. A full-fledged list of sporting events and other limitations on the activity would come together under a later version of the bill, should it gain traction.

As for the Connecticut Lottery Corporation, the bill would allow the agency to offer online draw games, via web browser and mobile applications, to those 18 years of age and older.

Despite the tribes being onboard and the draft legislation representing a bipartisan deal, Connecticut Gov. Ned Lamont is not yet in support of the plan, according to a report by the Hartford Courant.

A spokesperson for the governor told the Hartford Courant that he wants a gambling expansion deal that “mitigates the likelihood of years of litigation.”

The governor reportedly is still digesting the draft bill.

MGM Resorts International, a growing nationwide sports betting brand and experienced online gambling operator, has long been interested in a Connecticut casino. The draft bill would not give MGM access to the market, which could spur litigation related to a new brick-and-mortar casino.

Under the existing tribal-state gambling compact, the tribes have the exclusive right to slot machines in exchange for paying 25% of the revenue to the state. The two casinos gave state coffers more than $250 mm in the most recent fiscal year. Gaming revenues are on the decline, however, with the tribes reporting a collective decline of 7% in the most recent fiscal year compared to the previous one.

Revenue is down about 40% from a little more than a decade ago. At its peak, the state took in $430 mm in revenue sharing payments from the tribes. The state doesn’t get a cut of table game win.

Casinos in Massachusetts are especially detrimental to Connecticut’s gaming market. MGM operates a nearby casino in Springfield, Mass. The tribal gaming operators are looking to bolster their presence in Connecticut in order to compete with regional gambling expansion. Massachusetts is also considering sports betting, but it’s looking like the Bay State’s debate will extend into 2020.

Connecticut House Majority Leader Matt Ritter, a Democrat from Hartford, told the CT Mirror that there is momentum to ending a yearslong stalemate over expanding gambling in the state.

“Everybody is getting anxious about getting this over with, particularly sports betting,” Ritter said.