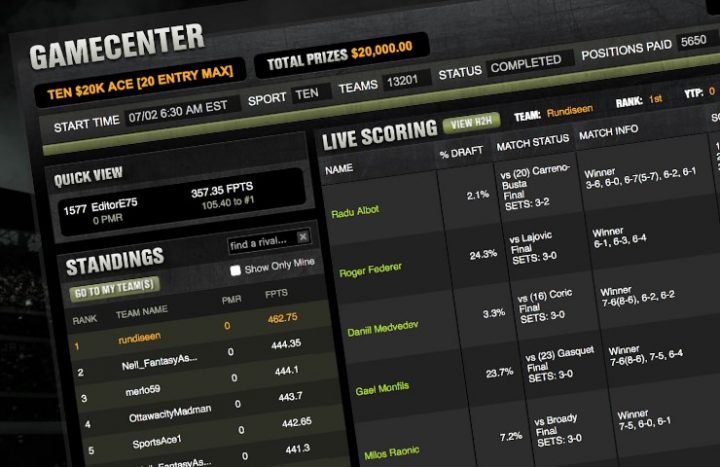 The date is July 4, 2019. Joey Chestnut downs his record-setting 75th hot dog. You whip out your phone and pull up the DraftKings app and watch your Nathan’s Famous Hot Dog Eating Contest daily fantasy team climb the pay ladder as Chestnut receives two points for the dog, 1.5 for the bun, and a 10-point first-place bonus.

Sound far-fetched? Maybe a little. But it isn’t inconceivable. Not at the rate at which daily fantasy operators are introducing new sports for players to try out.

We know what you’re thinking about that last sentence: Hot-dog eating isn’t a sport. Well, it’s as much a sport as League of Legends. And there are DraftKings contests for that.

Here are the sports (or eSports) currently offered on DK:

The last three on that list are all options that rival FanDuel doesn’t offer. Having a little something for everyone, all year round, is a good business strategy, especially as new competition in the form of online sports betting enters the equation. And there’s no real downside to offering sports that some users won’t be interested in.

“We like to keep an open and creative mind when it comes to potential contests on our platform,” Mark Nerenberg, DraftKings’ vice president of game operations and development, tells USBets.com. “That ‘never say never’ mindset has helped keep our teams inspired and our games fresh. Even if a sport might not seem immediately feasible to pursue, we are always willing to at least kick the tires.”

The newest addition to the lineup is tennis, which DK started serving up two weeks ago when Wimbledon began.

Was it a success? Take this for exactly what it is — a sample size of one low-stakes contest — but I entered a $1 buy-in guaranteed-prize-pool tournament (GPP) on the first day, July 2, and it drew 13,201 entries vying for $20,000 in prizes. That means DraftKings paid out $6,799 in overlay. The maximum field size for the same buy-in contest shrunk the next day.

In all seriousness, it was fun to play and to sweat throughout the day. That said, the scoring system DraftKings came up with for tennis is spectacularly complicated. Because you’re drafting men and women alike, and they play a different number of sets in the Grand Slams, all the point values are different depending on whether it’s a men’s match or a women’s match.

For someone like me, just playing it casually for a dollar to check out the experience, I simply trusted that DK’s math would even things out and I should just draft the players I thought were most likely to perform well, independent of gender. But if a more serious DFS player did a proper statistical analysis, they might be able to find some slight edge in drafting a gender-unbalanced team.

Not surprisingly, perfecting the scoring system was no quick task for DK.

“We have been interested to add tennis to our platform for a while, and took a little more time to ensure everything was just right while designing and creating this product,” Nerenberg says. “In structuring any DFS game, we look to create opportunities for strategy while keeping the drafting experience easy enough for customers to give it a try and compete. We also aim to create a format that is authentic to the sport, which usually involves having fantasy scoring that reflects actual performance to a reasonable extent.”

Nerenberg says there will be plenty more DFS tennis contests to come on the site — it’s not just a four-times-a-year offering.

“There was a huge demand for tennis among current customers,” he adds, “and we also saw a great opportunity to connect with a global community of tennis fans. Twenty-five million Americans tuned into Wimbledon last year, so we wanted to be an early provider of DFS content for tennis. We plan to offer contests for all ATP 250 series and higher, along with WTA international series and higher in addition to Grand Slams.”

It’s too early to say whether DFS tennis is or isn’t a success, but certainly there’s evidence that other non-major (not NFL, NBA, or MLB) sports have gained traction.

Many observers thought the concept of a Millionaire Maker — a GPP with a million-dollar first-place prize — would forever be limited to the NFL, but that was proven wrong when DraftKings ran its first golf Milly Maker at the 2015 U.S. Open. And golf isn’t the only sport outside the mainstream team sports that has proven capable of generating big GPP fields.

“Our third-fastest-growing sport is NASCAR,” Nerenberg says, “which has received 20 million total entries and a retention rate of 72% among customers since its 2015 launch, and we are continuing to develop new products to offer the best experience for our customers. Our success with NASCAR has proven the popularity of non-major DFS, and we look forward to exploring more options for customers and sports fans alike.”

In addition to adding tennis two weeks ago, DK just dabbled in NBA summer league for the first time. With DraftKings and FanDuel both working toward entering the online sports betting space, there will soon be no sport that escapes the radar of these companies. Other, smaller sites have already attempted to make daily fantasy poker and daily fantasy boxing work. What’s next? Rugby? Cricket? X-Games?

Will Legalized Sports Betting Help Boxing Climb Off The Canvas?

Sports Betting Is Coming To Mississippi, Just Not As Soon As We Thought