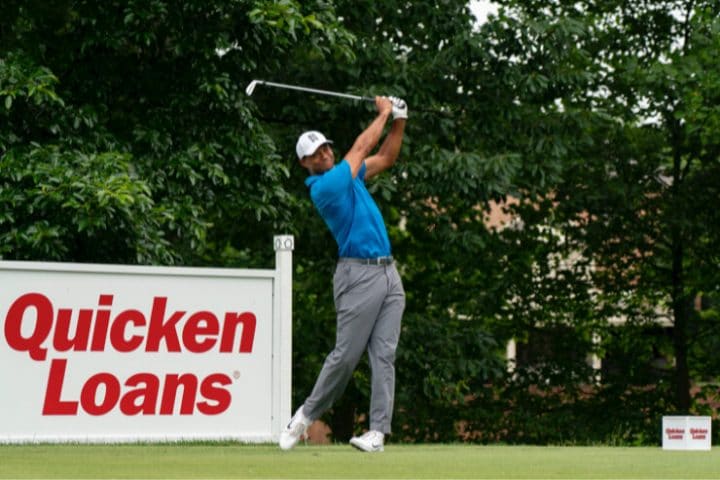 It’s official: Tiger Woods is back.

To be fair to The Big Cat, he’s been back as a threat to win tournaments for a few months. But it wasn’t until his tied-for-sixth finish a few weeks ago at The Open Championship — held at the notoriously nasty Carnoustie — that even the naysayers had to admit that Tiger is once again a force to be reckoned with on the PGA Tour.

The crowds. The roars. The classic fist pumps as putts roll in. And most importantly, other players — guys who have won multiple majors — bemoaning the sight of Woods’ name atop the leaderboard. Only a fool would refuse to admit that we are seeing the version of Tiger Woods we thought we’d lost forever.

The Tiger Effect on full display

Now that Woods is back, so is the Tiger Effect — the phenomenon that transforms the Tour in ways nobody else can. Without Tiger, there are feature groups, with popular players like Matt Kuchar, Jordan Spieth, and Rory McIlroy. At any given time during a day of tournament play, there are various groups with big names for fans to follow.

When Woods is out there, there’s Tiger’s group, and then there’s everybody else. There’s never a doubt when and where Tiger Woods is on the golf course because that’s where the vast majority of the fans are.

As for how Woods impacts the TV audience’s interest in a PGA Tour event, well, here’s everything you need to know:

And here is the worldwide heat map just after noon in the east coast, showing Tiger Twitter activity when he was squarely in the hunt. Just amazing. #Tiger #TheOpen @TigerWoods pic.twitter.com/Ri5zjHExoY

That’s truly an amazing representation of the Tiger Effect on full display. Here’s another example, from this week’s PGA Championship at Bellerive:

We're standing room only now with people fighting just to get in the door.

I understand that Dustin Johnson isn’t the most interesting interview, but we’re talking about the No. 1 golfer in the entire world vs. a player barely inside the top 50. When it comes to interest, popularity, and moving the golf needle, Tiger Woods is on another planet, even when compared to the game’s best players.

DraftKings has the data … apparently

Thanks to the wonders of social media and screenshots, this infamous tweet by Jon Aguiar, who at the time was DraftKings’ director of VIP experience, is forever preserved:

When the unreal TV ratings come out for this weekend just remember this.#FantasyGolf ⛳️ pic.twitter.com/7tkelW9RyW

Aguiar has a history of provoking DFS players with his tweets, but this was a new low. Tiger doesn’t have a muted impact on anything. It’s an impossibility. According to a 2017 Forbes article, Woods only trailed Michael Jordan in the “Richest Athlete” rankings, and Tiger is not only 13 years younger than Jordan, he’s also endured a massive public scandal that slowed his earning potential for a few years.

When it’s all said and done, Tiger is going to go down as the richest athlete in history. And it’s not even going to be close.

DraftKings started running DFS golf contests in 2015. An unhealthy shell of Tiger Woods played 11 tournaments in 2015, zero events in 2016, and one tournament in 2017. At no point during this time period did Woods seem like the dominant golfer we love to follow. His best finish was a T10 at the Wyndham Championship in 2015.

To refer to this “data” set as evidence that Tiger Woods does not impact DFS golf at the same level he impacts TV ratings — and literally everything else — is ridiculous. The sample size is too small to make such a claim. Realistically, Aguiar could have said something like, “We’re waiting to see if Tiger is actually healthy this time, then we’ll monitor the potential effect of a new, healthy Tiger on DFS golf.”

Does DraftKings really believe Tiger has limited impact on DFS?

Before I delve into what I’ve found, I want say that I have not played every DraftKings golf GPP over the last two years. Nor do I have the complete list of GPPs for every single event over 2017 and 2018.

What I do have is the FantasyLabs ownership dashboard, which lists the four biggest GPPs of any given week. It may not be the most foolproof way to do this, but it does at least provide a snapshot of DraftKings’ fantasy golf offerings in the tournaments Tiger Woods has played in 2018, which, of course, he did not play in 2017. Here are the dollar amounts DK had in its guaranteed prize pools:

Inexplicably, DraftKings has not given its guaranteed prize pools a significant bump, even though we have a near-vintage Tiger Woods back in the fold. There are a few hundred-thousand-dollar increases to prize pools, and a decent bump for both The Masters and U.S. Open, but The Open Championship guarantees actually got smaller.

It’s almost like DraftKings is taking half-measures when it comes to Woods, instead of fully embracing the Tiger Effect.

To me, this is insane. It’s a simple equation. Tiger amplifies the interest in any given golf tournament he plays. More eyeballs watching means a bigger gambling crowd, thus an opportunity for the golf DFS vertical to grow. Given the popularity of sites and tools like Cut Sweats, it’s clear more fans are tuning in on Thursday and Friday. I wonder why?

DraftKings says it has the data, but there’s no accurate Tiger Woods data, because it didn’t exist prior to this year. DraftKings has some relevant data now, but I don’t believe they’re using it properly. There was a fever pitch surrounding Tiger at Carnoustie as, prior to the tournament, Woods proclaimed that The Open was his best chance at another major. I don’t care what the damn data says, I’m making those contests bigger, not smaller.

I know one thing for sure: The presence of a healthy Tiger Woods should impact DFS golf more than we’ve seen thus far in 2018.

There are still signs of future growth

Overall, 2018 has been a good year for golf’s relationship with DFS and sports betting. Despite the underwhelming change in prize pools, DraftKings did release a new Single Round Showdown format ahead of this year’s Masters, and product innovations bode well for the future.

Additionally, the PGA Tour has maintained a positive stance toward legal sports betting, with Commissioner Jay Monahan voicing his support before PASPA was even struck down.

With a huge Tiger vs. Phil $10 million heads-up matchplay event on tap for Thanksgiving 2018, it’s safe to say the golf betting and DFS worlds are headed for bigger and better things in the near future. Hopefully, DraftKings will jump aboard the Tiger train before it leaves the station.

Inside The Sports-Betting Potential Of The Proposed Tiger vs. Phil Showdown