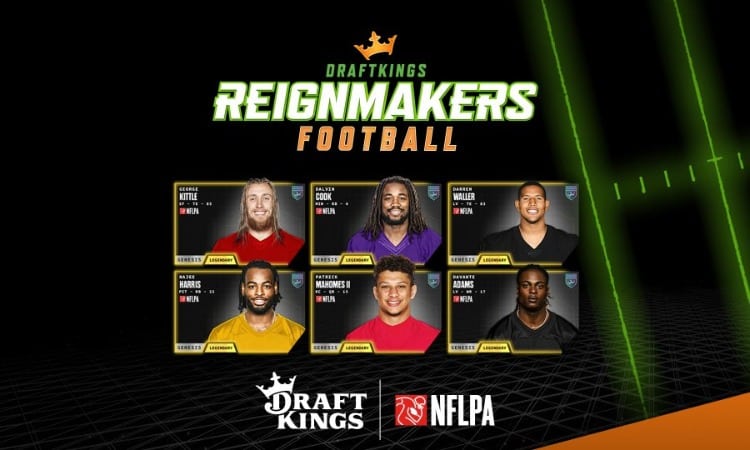 Last summer, DraftKings got into the NFT space, teaming up with Tom Brady and Autograph. Things went from good to bad to better in quick succession for the tiered releases, though the current prices on the DraftKings-branded NFTs — much like most NFT products around the world — are far off their initial highs.

But DraftKings is doubling down on NFTs, introducing an NFL DFS NFT product called Reignmakers. It enables people to buy the NFLPA-officially licensed NFTs of players and insert them into a daily fantasy contest in which they can win real money, other NFTs, and assorted prizes.

The future is finally here. Reignmakers Football is COMBINING NFTs and the fantasy football world.

And it all starts with GENESIS.

“The cards have utility in a variety of ways, but in a lot of ways you don’t even have to understand NFT or Web3 technology to play the game,” Matt Kalish, DraftKings president and co-founder, said during a call for journalists the other day. “It’s more like, ‘I have these cards, I’m using them in the game.’ The primary utility of the cards is being able to use them in contests, where you can win over a million dollars every week of the season. Those contests, if you’ve played daily fantasy sports, will look familiar to you.”

The chief difference? Contests are tiered — Core, Rare, Elite, Legendary, or Reignmaker — and cards are labeled as such, with “core” being the least expensive. (A pack can be bought for less than $20 for three cards, and DraftKings is giving all users a six-card pack for free, which is enough cards to enter a tournament.)

The most expensive tier, Reignmaker, is seeing cards go for over five figures in the secondary market, though the vast majority of them are limited to eight cards. Thus, the tournaments will also be significantly smaller, though with lucrative prize pools (which are expected to drop this week).

As to why, exactly, DraftKings sees fit to try and merge DFS play with NFTs, in addition to their sports betting, DFS, and casino offerings?

“This is an additional product, an additional game that intersects a little bit more tightly with other interest areas of people that in some cases we haven’t historically had on DraftKings,” said Kalish. “If you’re into crypto/NFTs, if you’re into sports card collectibles, if you’re into breaks, collecting scarce graded cards or sealed product, if you play games like Magic the Gathering, if you play EA Sports Ultimate Team. All these things, in addition to the sports interest and fantasy interest, hit a little bit more tightly.

“For instance, DFS looks nothing like Madden Ultimate Team, but this sure looks a lot like it, because you’re building, collecting, growing a team, divesting players you don’t believe are going to be part of things for you, adding the players you have a lot of conviction about. Plus, it has that collectible dynamic. We’ll probably have a ton of people who are interested in a subset of some of these categories.”