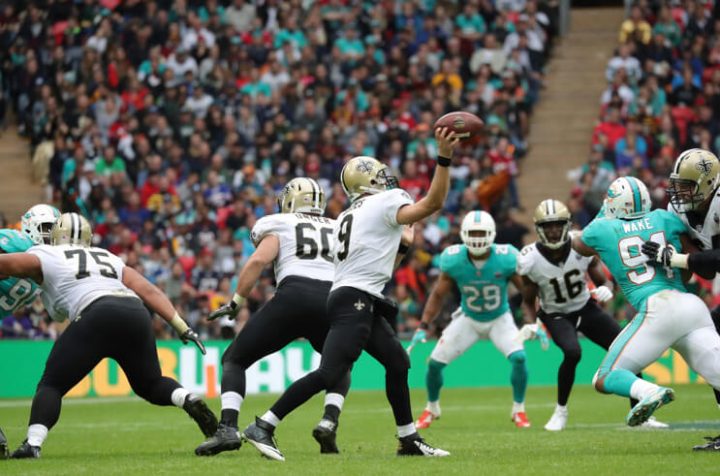 Another football season is almost upon us, which means DraftKings has once again released its NFL opening week salaries … in July.

For those of you checking your calendars, the first game of the 2018-2019 NFL season isn’t until Thursday, September 6, with the main Sunday slate a few days later on September 9. Heck, the preseason hasn’t even kicked off yet (but it does soon, in case you want to enter some NFL preseason DFS contests).

I’ll get into a breakdown of the reasons DraftKings releases its NFL salaries so early, but let’s cut to the chase: It’s a marketing device that remains alive and well because it works, and it benefits DraftKings more than anybody else.

But it’s so exciting, isn’t it?

I get it. Football is a hugely popular sport, and the opening week of an NFL season is a big deal. It’s exciting that football is almost here, so isn’t it great that we get to dissect DFS salaries for Week 1 already?

The short answer is probably not. The longer answer is there’s early, and then there’s too early — and this is too early. You know how it gets annoying when back-to-school sales start two weeks after school ends, or when Christmas decorations hit the shelves in November? That’s all marketing. It’s about generating buzz, because the earlier people hop on board the hype train, the more time that train will have to fill, and the more sales increase.

DraftKings knows the first week of the NFL season is like Christmas morning to football fans and DFS players, and year after year, they take full advantage. Again, tough to blame the company for taking this route, but buyer beware.

A few months ago, I had a conversation with a DraftKings’ customer experience team rep who assured me that DraftKings knew it had to treat its customers better and was dedicated to improving its player experience at every level.

In my opinion, this is a poor way to treat the player base.

Releasing salaries in July for games that are in September is very bad for the largest percentage of the DraftKings player pool: the casual player. Why? Because early salaries completely change the game that’s being played, but unfortunately, many casual players won’t be aware of this fact.

Let’s be honest, not all NFL fans wants to check the news every day to see if Sam Bradford, priced at $5,200, and his wonky knee make it through preseason. But his backup, Josh Rosen, checks in at $4,700, which is uber cheap for a quarterback who could potentially be throwing to David Johnson and Larry Fitzgerald all game.

The NFL preseason is perhaps the most impactful preseason among the big four professional sports leagues, because of injuries suffered and playing time sorted out. By releasing players’ salaries more than a month before the actual games, DraftKings is making a lot of guesses about playing time, which has a huge impact on a player’s value. Injuries are, of course, entirely unpredictable, but with football being such a violent sport, there will be a handful of huge injuries that push cheap second-stringers into primetime roles, thus flipping the whole salary board on its head.

Inaccessible to the everyman fan

Releasing NFL salaries early is something that pays off for DraftKings in the short term. They fill the mammoth Week 1 contests, somebody walks away a millionaire, and football is back, baby! All is right in the world.

But really, what’s actually happening is DraftKings is furthering the inaccessibility of DFS for casual players. Being a winning DFS player requires a lot of work. Not many casual players can commit this kind of time to DFS — tracking news for five or six weeks for a single slate — which is in part what makes them casual players.

Some of these players understand the deck is stacked against them and are content to play for the entertainment value and an outside chance at some money. Others have no clue that they have virtually no chance. And in Week 1, with salaries released over a month in advance, they have even less of a chance.

These players aren’t going to be reading articles or listening to podcasts throughout August. They aren’t going to keep track of injuries, playing time battles, and suspensions. They might get wind of a good play or two, but chances are by the time the actual games roll around, these plays will be massively stale chalk touts, which means the sharper players will be onto better plays. It’s a battle that is so seldom won by casual players, and one that’s only magnified by more time getting added to the clock.

I’ve written before about DraftKings’ need to develop a better experience for its players. Unfortunately, sticking to the tried and true method of releasing Week 1 NFL salaries comically early, at the expense of its casual players who could be turned off if they get crushed on the opening-week slate, is once again a step in the wrong direction.