Controversy reigned at DraftKings' first sports betting live final, and now the company and the contestants need to learn and adjust. 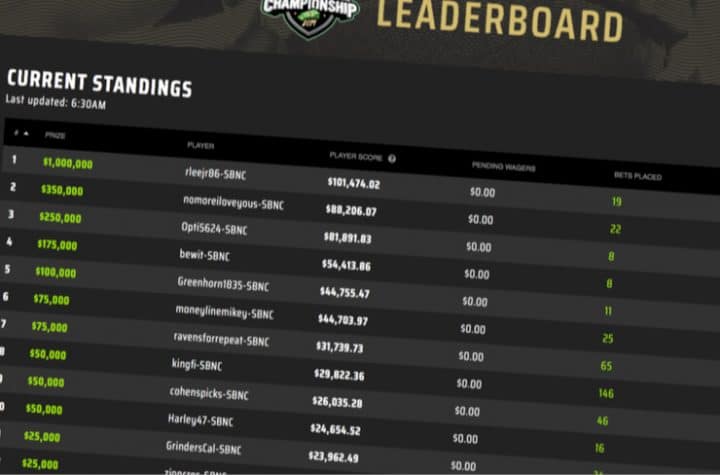 Nobody knew quite what to expect from DraftKings’ first foray into the uncharted territory that is a live final for sports betting.

The format had never been attempted before, and now they were trotting it right out with $2.5 million in guaranteed prizes (including, as it turned out, $1.2 million in overlay) and 260 competitors.

The first World Series of Poker Main Event with a tournament format welcomed a field of six players and a winner-take-all prize of $30,000 and took decades to evolve into an event with a seven-figure first-place payout. But mere months into what looks to be the start of an American sports betting boom and eager to make a splash, DraftKings fast-forwarded past all the small-field stuff and took a shot despite the likelihood of needing some trial and error to get a competition like this right.

Now that the first DraftKings Sports Betting National Championship is in the books, we can confirm: This trial definitely came with some error. It also generated a lot of excitement and interest and left many players impressed and promising to come back next time.

With that “next time” in mind, here are five lessons we — meaning everyone from organizers, to players, to journalists — learned from this experimental first shot that played out this past weekend.

1. DK needs to make winning bets pay out instantly for all

Let’s get straight to the controversy. Randy Lee, a 32-year-old poker dealer from New Jersey betting under the screen name “rleejr86,” won the competition with a final bankroll of $101,474.02. He bet $47,500 of the roughly $58,000 left in his bankroll on the Eagles to cover the 8.5-point spread in the final NFL game on Sunday and hit to become the only entrant to cross the $100K threshold. Lee won the million-dollar first place prize, plus the $101K in his ’roll, plus a $50K bonus for entering Sunday with the lead.

Daniel Steinberg, playing under the screen name “nomoreiloveyous,” also hit on the Eagles to surge into second place with a little over $88K.

But it’s the man they passed on the leaderboard when the Saints-Eagles game went final who stands at the center of a massive controversy. Professional sports bettor Rufus Peabody, playing as “Opti5624,” had an $81,891.83 bankroll entering the final game and told ESPN he wanted to either bet the under on Saints-Eagles (which would have hit) or made a bet on the Saints (a loser against the spread, a winner on the moneyline). But Peabody couldn’t bet because his bankroll was tied up in a winning bet on the Patriots-Chargers game, which ended just minutes before Saints-Eagles kicked off:

My Pats bet didn't grade before the Saints game started, so I couldn't get anything down. This is some sh*t.

Peabody wasn’t alone in his frustration. But the playing field wasn’t totally level on that front:

I was not at the “sportsbook” until recently, but people told me they were able to get their early game bets manually graded quicker by going over to the help desk. 🤭

When it was all over, Peabody, who won $250,000 plus his $81K bankroll for third place but missed out on a possible million bucks, kept his cool. He tweeted, “FWIW, I’m actually doing fine. I spent so much anxious energy earlier in the day that I don’t have enough energy to be livid. Did I want to win? Yes. Would it have changed my life? No. I’m disappointed, but life goes on.”

That attitude aside, it would shock no one if Peabody considered legal action against DraftKings. (ESPN asked him about that, and he declined comment.)

Of course, being locked out can go both ways. RotoGrinders CEO Cal Spears had a similar situation and said he intended to bet his whole bankroll on a parlay involving the over that would have lost. By being unable to get that bet in, Spears landed in 11th place for $25K plus his ‘roll of almost $24K, rather than finishing with zeroes across the board. It’s like when people complain about the last seat in blackjack “taking the dealer’s bust card”; for every time that happens, there’s a time when the last seat takes a card that would have helped the dealer.

Maybe DK will face will face legal consequences, maybe the company will offer affected players a make-good. We’ll have to see where it goes from here. But the lesson is clear: There must be consistency in the timing of the payouts. (Or everyone should be allowed to place “if win” bets on the final game while awaiting payouts.)

DraftKings tried to keep things simple on Sunday by only allowing betting on the two NFL games and by not allowing in-game betting on the second game, but that wasn’t simple enough, apparently.

Organizers could have foreseen a close shave between the end of one game and the start of the other. And they should have made certain that, considering all bets were made digitally, the payouts hit accounts automatically when the Pats-Chargers game clock read 0:00. Somehow that didn’t happen.

Even props shouldn’t pay out until the game ends, Spears opined:

First, I loved the SBNC and will be buying into the next one. Prop payout consistency is another big issue, though. Michel yardage prop payed out at 2:10. My Tyrell parlay prop hit and I wanted to leverage winnings in game. It didn't pay out until 3:33. All should pay post game. pic.twitter.com/cR4ILZSFPu

It is a little weird to pay out the Sony Michel yardage prop early. What if he crosses 61.5 yards … then has a couple of 10-yard rushing losses in a row? Spears is right: All bets on a game have to pay out, to everyone, at exactly the same time.

We probably could have guessed this going in, but it’s how you finish, not how you start. Plenty of entrants, including notoriously fashionably late Phil Hellmuth (okay, the use of “fashionably” there might have been a reach), didn’t place a single bet on Friday. As is the case in poker, you can lose a tournament on the first day (10 DK SBNC competitors went bust on Friday), but you can’t win it on the first day.

It doesn’t hurt to do well on Day 1, obviously. But it’s more important to just be in the hunt and then hit your big bets on Sunday.

Oh, and if you want to win this sports betting competition next year, you’d better know football. Soccer and basketball bets on Friday and Saturday can help you build a bankroll, but the format ultimately favors those who know how to bet on the NFL because that’s all you’re allowed to do on the final day.

Meanwhile, the top five on the final leaderboard made 19, 22, 8, 8, and 11 bets, respectively. The lots-of-little-bets strategy appears, based on a sample size of one sports betting competition, hard to win with. The more successful strategy, it seems, is to make a modest number of bets, increasing in size as the competition goes along and your bankroll increases, with parlays mostly limited to realistic two-leggers.

Needless to say, you have to pick a lot more winners than losers, which requires both skill and luck. As with a poker tournament or a daily fantasy GPP, it’s not always skill that prevails. In this particular sports betting event, if someone had just a few thousand dollars left entering the final game but happened to take a long shot on Philly’s fourth receiver Jordan Matthews to score the game’s first TD, that luckbox would be a million dollars richer today.

In the end, though, it seems the best strategy other than “be a luckbox” is to not take too many crazy risks and limit your variance by making just a handful of bets per day.

4. 20x your starting bankroll is a good winning target

There was much discussion beforehand about what the winning bankroll figure would be, with guesses ranging from about $50K all the way to $250K.

Now we have a general idea to tighten that range in the future. Starting with $5,000 and having three days to run it up, the plan for someone hoping to win the top prize should be to chart a path to 20 times your starting “stack.”

5. This is a great way to game the monthly handle reports

As SharpSide’s Donnie Peters reported, through the first two days of action, the betting handle for the event was just over $3 mm. So with the field thinning but the bet sizes increasing on Sunday, DK likely processed between $4-5 mm worth of bets over the course of the whole contest.

DraftKings is already the leader in New Jersey online sports betting handle (and a new report coming out later today is unlikely to change that), but DK figures to win January by a bigger margin than ever.

However, what’s good for the handle isn’t necessarily good for the revenue, especially if you’re reporting the overlay.

The SBNC drew 260 entrants, well short of the 500 needed to avoid overlay (and the 531 needed to increase the leaderboard prize pool). DraftKings ultimately ended up having to add $1.2 mm to the pot, since only $5,000 of every $10,000 entry fee went into that pool.

The other half of every player’s entry fee went into his or her bankroll, meaning there was $1.3 mm in play among the 260 contestants.

Exactly half the field, 130, ended up with $0 in their accounts.

All in all, it was a revenue loser for DK, to the tune of about $865,000. And it might get worse if the company chooses to or is forced to make good with players like Peabody. But there’s certainly value for DraftKings in the publicity and buzz the event generated. And much of that $965,753.57 won’t be withdrawn — it will stay in play and end up in DraftKings’ coffers eventually.