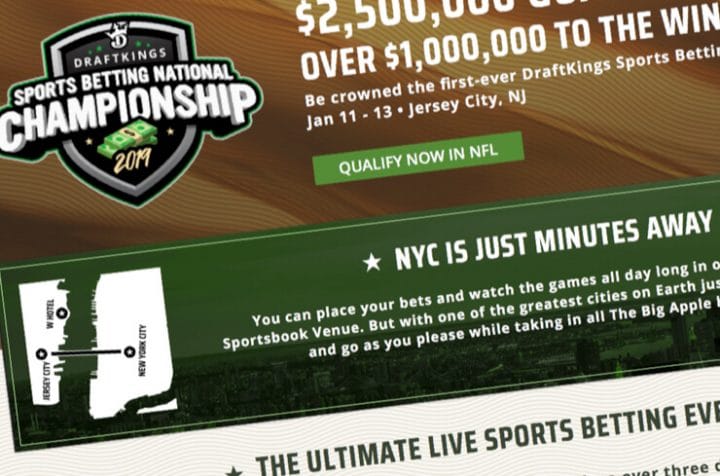 “Come to New Jersey and get in on the action.”

It’s not a sales pitch you hear every day, making the state that brought the world Snooki and The Situation sound like a destination. But given the Garden State’s newfound status as the American capital of online sports betting, it’s the place to be from Jan. 11-13, 2019, and it makes perfect sense for DraftKings Sportsbook to be using that “come to New Jersey” language in its promotional materials.

We’re less than four weeks away from DraftKings’ inaugural Sports Betting National Championship, an application of the DFS giant’s successful live finals concept to the sports wagering space. So far, 34 daily fantasy players have qualified for $12,000 entry/travel packages in the $2.45 million guaranteed competition; more will qualify over the next few weeks, but the bulk of the entrants will buy their way in for $10,000.

However many ultimately enter, they each get a $5,000 bankroll to spend how they want — within certain parameters — at DK Sportsbook over the course of three days. Key restrictions: You must bet at least $1,000 over Friday and Saturday combined; you must bet at least $2,000 on Sunday; whereas you can make any bet available on the DK site/app the first two days, on the final day you can only bet on Sunday’s two NFL divisional playoff games.

When the final whistle blows on the Sunday, the biggest bankroll wins a million bucks, with the next 24 places all taking home smaller amounts of prize money (prizes to be adjusted upward if there are more than 531 entries).

US Bets touched base this week with three serious bettors planning to enter, hoping to get them to weigh in on possible strategic approaches. Unfortunately, two haven’t seriously contemplated their strategies yet, and the third was so protective over his purportedly unique approach that he didn’t want to talk about it, even anonymously.

Can you blame him? There’s big money on the line, and in a brand-new event like this, every strategy is potentially contrarian or innovative.

We’ll see next month how it plays out, but for now, here are five possible strategic approaches to look for when action gets underway.

1. A team approach to an individual game

The rules say explicitly that only one entry is allowed per player. However, the rules don’t say anything about multiple players entering as an unofficial team, swapping percentages of each other’s winnings.

With this in mind, it is likely that there will be groups working together in some way in the Sports Betting Championship, willing to bust a few of their bankrolls in hopes of getting one or two to the top of the leaderboard. Hypothetically, if 10 friends bought in — a $100,000 expense — and they gambled their entire bankrolls in high-risk ways on Friday night, they might be content to have six or seven of their entries go up in flames if it means three or four are among the leaders on Saturday.

This is something to watch for that would significantly affect the style of play and might make it hard for a more conservative bettor to make the money.

This overlaps somewhat with the “team approach” noted above, but it’s a strategy that applies to individuals as well.

Although Saturday, Jan. 12 is the most stacked sports day of the weekend, featuring eight NBA games, 12 NHL games, two NFL playoff games, tons of soccer, and too many many college basketball games to consider counting, Friday Jan. 11 also offers plenty of options. There are nine NBA games, four NHL games, and a handful of NCAA hoops contests.

That means there’s opportunity to make big moves. A bettor could put half of their bankroll on an eight-team parlay that pays some astronomical amount. The bettor could put the whole bankroll on a bet like that. Or perhaps on a random player prop like “first to score a goal” on some second-rate player who’s listed at +2000.

Whatever the exact application of the method, it’s a strategy that acknowledges 26th place pays the same as last place, the big money is at the top, and a zero is a zero, whenever you end up there.

Some will be reluctant to do it because of the “fun” factor — they’re in Jersey City competing all weekend, and they don’t want the competition to end for them on the first night.

But a million bucks could pay for a lot of fun down the road.

Everyone can agree that playing conservatively throughout the competition won’t give you much of a shot at first place. Even if the upset bug is striking and lots of entrants fall by the wayside, surely some of the other bettors will build bankrolls. The idea that a final ’roll of, say, $10,000 could win is almost incomprehensible.

But there’s potential wisdom in starting out conservatively. You don’t have to bet at all on Friday. If you do make bets Friday, they can be small bets, $100 or so apiece, at -110 odds, limiting your variance. You’ll come into Saturday somewhere near your starting “stack” of $5K, and can survey the leaderboard and see what you have to do. If the leader has $100K, you’ll know you need to hit the gas with some big longshots and parlays. If nobody excelled on Friday, you can play it conservatively again for most of the day Saturday and then make your move Saturday night.

The problem is the short menu on Sunday. With only two games available to bet, parlay action is limited. But still, a single bet like a random WR3 to score the first TD at 30/1 for your whole bankroll can make up a lot of ground if it hits.

The “cash out” option adds a whole different layer to this competition. Once a game starts, your bet isn’t necessarily a done deal; at different points throughout the game, DraftKings might offer you the option to end your bet, either taking a smaller loss or a smaller profit than you would have if you’d seen it to its conclusion.

What this means for the Sports Betting Championship is that it’s not just a bet-it-and-sweat-it deal. The work continues during the games. The true grinders will place a lot of small bets, especially on Friday and Saturday, not risking their whole bankrolls in one shot. And then they can micro-manage those bets by cashing them out early if they feel it’s the smart play.

Mitigating risk isn’t likely to be a hallmark of the winner’s strategy. But used sparingly, a smart cash-out here or there could make all the difference in the final tally.

Once the second Sunday NFL game kicks off, no more bets can be made. But for all other games, in-game betting is in play.

Don’t want to bet that Warriors-Clippers game on Friday night until you’ve seen whether Klay Thompson seems to have his shooting touch? In-game betting allows you to wait, watch him drain his first two shots from behind the three-point line, and then make a bet on the outcome. The odds might have been more favorable before the game, but your chances of winning will sometimes be better once you’ve soaked in a few minutes of action and developed a sense for how the wind is blowing.

Some sports bettors are little more than number crunchers who barely watch the games. But others get their edge from studying the athletes. The in-game bettor who spots a trend before the bookmaker does might just be able to gain a little separation from the pack next month in Jersey City.

State Of The States: Sports Betting In The Northeast Region