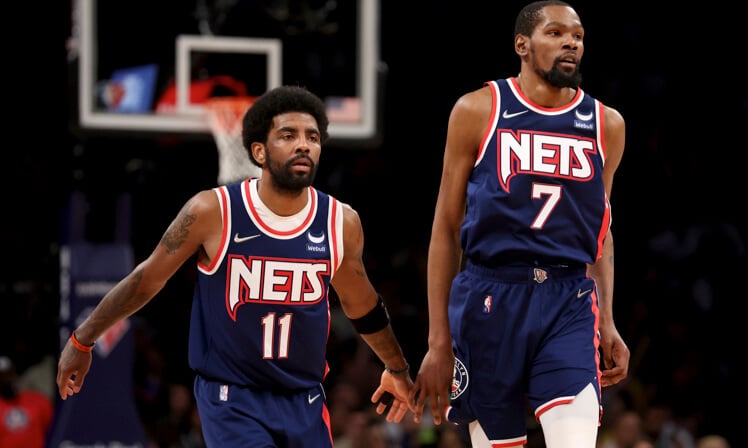 Who was the biggest name to voluntarily switch teams during the NBA’s annual free agency bonanza? That’d be Jalen Brunson, who defected from the Dallas Mavericks to the New York Knicks. In so doing, he became the first player in league history to sign a contract in excess of $100 million ($104 million over four years, to be precise) without ever having made an All-Star team.

The Knicks being the Knicks, the Brunson signing was but a whisper compared to the roar elicited by sports bettors when the Thin Man (Kevin Durant) across the bridge from Manhattan voiced his desire to vacate the Nets.

As of this writing, Durant and Kyrie Irving are still technically Nets. But both are expected to be traded soon, which explains why Brooklyn’s odds to win the 2023 NBA title went from 8/1 to 50/1 at the SuperBook. Durant reportedly wants to play in Phoenix or Miami, the top regular-season teams in 2021-22 in their respective conferences. On this news, the Suns saw their title odds shift from 12/1 to 13/2 at the SuperBook, while the Heat’s championship odds went from 18/1 to 11/1 at FanDuel.

After KD’s demand, ESPN’s Brian Windhorst insisted that Durant still wants to play with Irving — just not in Brooklyn. The veracity of this report notwithstanding, LeBron James is purportedly keen on reuniting with Irving after their relationship went sour in Cleveland, which explains why the Lakers’ title odds were halved at most mobile sportsbooks, dipping from 22/1 to 11/1 at DraftKings as one such adjustment.

While Toronto was not a team Durant named as a preferred destination, sportsbooks believe the Raptors have enough assets to fetch the 7-foot sharpshooter that their odds went from 55/1 to 25/1 to win it all at DraftKings.

In what was easily the most bizarrely entertaining three minutes of the free agent frenzy, Windhorst slowed First Take way down to deliver a sizzurpy soliloquy about all the strangeness surrounding Utah’s trade of three-and-D wing Royce O’Neal to Brooklyn for a first-rounder.

Brian Windhorst just ran the First Take desk in circles. They were hanging on his every word for 2+ minutes 😂😂. Absolute masterclass. pic.twitter.com/Q1vn6mD9iz

It’s anyone’s guess as to what Windy was getting at here, but the Jazz subsequently swung the biggest trade of the long weekend, sending Rudy Gobert to the Timberwolves for no less than four first-rounders and a decent collection of rotation players that includes Jarred Vanderbilt and Patrick Beverley.

As The Ringer put it, “That is a hell of a lot to pay for any one player.”

In the short term, the Gobert acquisition seems to give Minnesota a puncher’s chance of earning home-court advantage in a first-round playoff series. But while the T’Wolves’ odds of winning an NBA title improved from 66/1 to 35/1 at BetMGM, their big swing didn’t elevate them to the ranks of serious championship contenders in the opinion of oddsmakers.

What about the finalists?

Despite cruising through the playoffs to notch their fourth NBA championship in eight seasons, the Golden State Warriors are not favored to successfully defend their title. That could be due to the fact that most of the Dubs’ bench left for greener pastures in free agency, with Gary Payton II (Portland), Otto Porter Jr. (Toronto), Damion Lee (Phoenix), Juan Toscano-Anderson (L.A. Lakers), and pasty stiff Nemanja Bjelica (Turkish League) taking their rings on the road.

On the upside, the Warriors — generally priced around 7/1 to repeat — retained the services of starting center Kevon Looney and made what could be an extremely savvy under-the-radar acquisition in signing ex-Buck Donte DiVincenzo to a two-year, $9.3 million deal.

But it’s the Celtics who are the consensus favorite (6/1 at DraftKings, FanDuel, and the SuperBook) to win it all after giving up a gallingly flimsy package — what promises to be a low first-round pick and a pile of bench flotsam — to snatch Malcolm Brogdon from the Pacers. While prone to injury, a healthy Brogdon gives Boston a true point guard and deadly third scoring option who stands to scoot reigning Defensive Player of the Year Marcus Smart back to a bench role.