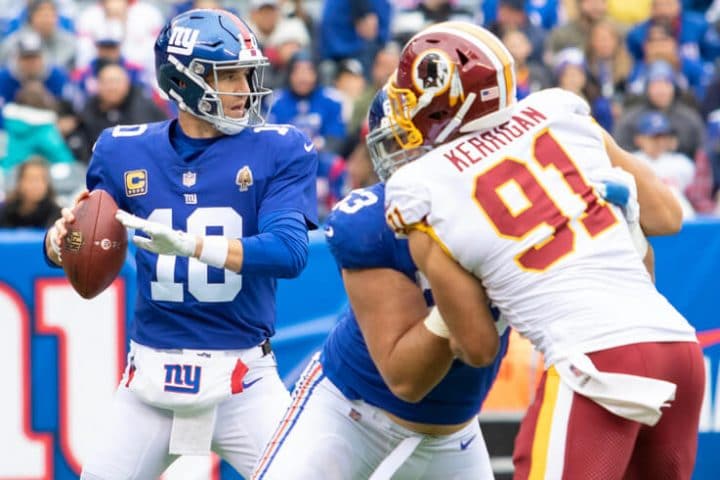 Only 134 days until the start of the NFL season. Have you gotten your bets in yet?

The 2019 NFL schedule was released one week ago today, and the sportsbooks certainly didn’t waste any time getting their lines posted. Bookmakers went into the two-minute drill to get Week 1 games up as quickly as possible, but some of them didn’t stop there.

In New Jersey, a state that has catered to the local market more than Nevada ever could because, well, Nevada doesn’t have much of a local pro sports market (yet, anyway), FanDuel Sportsbook promptly posted all 16 New York Giants games. PointsBet went further and posted every single Giants, Jets, and Philadelphia Eagles game. And DraftKings and Play Sugarhouse (which are both powered by Kambi and tend to post identical lines) have listed every Giants, Jets, Eagles, and Pittsburgh Steelers game, clearly positioning the Sugarhouse app to take full advantage when Pennsylvania online sports betting goes live in the next few weeks.

This sort of aggressive line posting as much as eight months before some games is not entirely unprecedented; last season, CG Technology released lines in May for every single game from Week 1 through Week 16, omitting only the Week 17 showdowns.

There were $500 betting limits, though, which indicates what these early lines are really about: marketing, customer acquisition, customer satisfaction, and good old-fashioned fun. The idea is to give bettors a little something to feed their football-betting need without exposing the books to serious liability.

“We’re seeing some action, but if you’re going to compare it to a couple days out from the actual games, it’s not even close,” DraftKings’ Johnny Avello, a veteran Las Vegas bookmaker, tells US Bets.

FanDuel is reporting a similar level of buzz: “The NFL market has seen some early interest,” says Director of Publicity Kevin Hennessy, “but it hasn’t rivaled the interest in sports that are currently in season, like NBA and MLB.”

In other words, posting NFL lines this early isn’t affecting the operators’ bottom lines much … but there’s no harm in doing it.

“People can’t get enough of football, right? So season ends, Super Bowl’s over, everybody goes through a little cooling-off period, we go through the March Madness basketball tournament, and then all of sudden it’s focused on football again,” says Avello. “So you put the lines up, you start generating the thinking again, because there’s not a whole lot during the summer to actually think about once you get by the NBA and NHL playoffs. The thinking is just, get the football machine rolling again.”

Avello says DraftKings has seen enough action to move one Week 1 line already, as Arizona has gone from a 1-point underdog against Detroit to a 1-point favorite. He also indicates Seattle might soon move from -7½ against Cincinnati to -8, and Chicago is getting bet heavily at 3½ hosting Green Bay.

A long way from December

Interestingly, FanDuel has had to move a line not on a Week 1 game, but on a Dec. 9 game between the Giants and Eagles. The Philly fans are out early in Jersey, pushing the Eagles from -8½ to -9 for a game some 7½ months away.

The reality is, it’s near impossible to predict in the spring how good any team will be in December. The NFL Draft hasn’t even happened yet (that starts tomorrow). Many rosters are a mystery, and dozens of key players will suffer injuries between now and the final month of the season. Hypothetically, say the Giants exceed expectations and are in the playoff hunt entering that Eagles game, while Carson Wentz gets injured and Philly is below .500 and going into “wait ’til next year” mode. New York could be three-point road favorites, representing a 12-point swing and an unfathomably massive “middle” for bettors who take the Giants now.

“I have mixed feelings on it, have for quite some time,” says Avello, who notes this practice of posting Week 1 lines ASAP after schedule release dates back about 10 years. “You have to do it because the customers enjoy seeing the lines up from the first week, but I’ve always been skeptical because of the injuries, other factors, so many things that could happen before we ever get to that game. One major injury to someone, a significant player, could change a line anywhere from three to 10 points. You know, you take a Tom Brady or an Aaron Rodgers, somebody that plays a huge part in the team’s role, an injury like that changes everything for that particular game.

“But the limits are on the lower side, they’re not what they would be for the day of the game. You’re really not gonna get hurt too bad. But my mindset has always been, I like to know who’s playing when I put a number up.”

Avello wasn’t in on the decision to post lines for all games for the New York and Pennsylvania teams — he’s still based in Vegas and that came from “the team back east” — but he recognizes that it’s fun for the local fans.

“One of the first learnings we got through the NFL season last year, and particularly at the start, was just the sheer bias towards the Giants here in New Jersey,” Sheeran said. “You know, there’s a massive demand for it. I don’t think it matters how bad they’ll ever get, they’ll continue to be our worst result in the Super Bowl book every year.”

(For what it’s worth, Hennessy clarifies that FD’s biggest Super Bowl liability is actually now on the Jets, with the Giants just behind them.)

Another interesting side effect of the unofficial holiday that is Schedule Release Day is that bettors can start firing at season win total over/unders with increased knowledge. And Avello says those bets have indeed picked up in the past week.

“Oh, definitely, people have been betting those,” Avello says. “There’s been about eight teams that have taken significant action on one side of the other. None of them have moved the number, but we’ve moved the money on them.”

As the most popular American sports leagues, namely the NFL and the NBA, inch closer to requiring year-round coverage, betting on them also creeps toward becoming a pursuit without an offseason. The sportsbooks know that the hunger for NFL betting can never be fully satiated.

But insiders understand that it would be crazy not to.