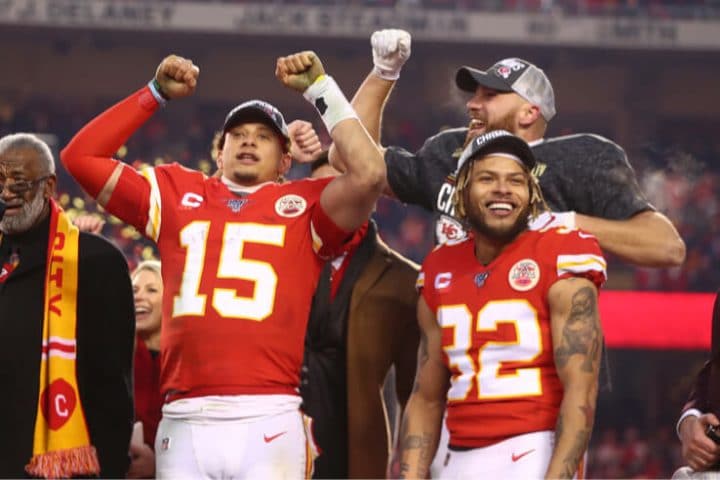 As the San Francisco 49ers were putting the finishing touches on their 37-20 win over Green Bay Sunday evening, many of the sportsbooks weren’t sure which team to favor between the Niners and the Kansas City Chiefs, opening the Super Bowl (or “NFL Championship,” as copyright-conscious books refer to it) as a pick ’em.

So the bettors let them know which team to favor.

The early action favored the Chiefs, including $33,000 on Kansas City on a pick ’em line at a William Hill sportsbook, and before long, the line was anywhere from KC -1 to KC -2. As of Tuesday morning, the “consensus” line — the most commonly found number — stood at Chiefs -1.5.

The point total has also been on the move. It started at 51.5 at many books, but apparently bettors see this matchup between the offensively explosive Chiefs and the defensively stifling 49ers leaning more toward the explosive side. Bets as high as $110,000 at Westgate Las Vegas came in on the over, and now the total is 54 at most sportsbooks (and as high as 54.5 at Caesars).

For now, the best moneyline prices we’re seeing after surveying numerous books are -118 on Kansas City (Caesars) and +112 on San Francisco (FanDuel).

Where will the lines settle? With a dozen days to go until the big game in Miami, it’s hard to say for sure. It seems unlikely that the Chiefs will rise above 2½-point favorites. Might it swing back in the other direction and end up where it started, without a favorite? It would probably take some unexpected KC injury news to make that happen.

And if it did, it would be a first. The game has never closed as a pick ’em in terms of the consensus lines. But there have been three times in history we’ve seen a 1-point spread: Seattle was favored by 1 over New England in 2015, San Francisco gave 1 against Cincinnati in 1982, and those famous undefeated ’72 Miami Dolphins were only a single-point favorite over Washington in the ’73 Super Bowl.

For those in the gaming industry, many of them focused on the health of sports wagering at the end of this second NFL season since the activity became legalized in numerous states outside Nevada, there will be great interest in the Super Bowl betting handle figures.

When the New England Patriots took on the Los Angeles Rams in Super Bowl XLIII last year, with legal betting on the Super Bowl across the U.S. at an all-time high due to new expansion, the handle dipped in Las Vegas. The total came in at $145.9 mm for the 2019 game, as compared to $158.6 mm the year before. Some attributed that to Patriots fatigue, others to the lack of a fan base for the Rams or even to their controversial qualification for the game, aided by a missed pass interference call in the NFC title tilt.

Will the Vegas handle go up this year with a near-pick-’em game? Well, the Pats closed at -2.5 last year, so there’s no big difference there.

While the majority of the money will be on the spread, the moneyline, and the total, prop bets are an omnipresent element of NFL wagering, and particularly so with the Super Bowl.

Yes, you can bet legally on the coin toss. Both FanDuel Sportsbook (available in New Jersey, Pennsylvania, West Virginia, and Indiana) and PointsBet (available in New Jersey and Iowa) offer the prop, with -103 juice on either side. It’s not a plus-EV gamble, but it’s a better return than picking red or black on roulette at a U.S. casino.

One of the most popular ways to bet the Super Bowl is by trying to identify the MVP of the game. The conventional wisdom that “quarterbacks always win” was bucked last year, when New England wide receiver Julian Edelman, as astonishingly high as 50/1 in early betting odds, earned the honor.

Still, quarterbacks do usually win, and the two QBs are the clear favorites on Feb. 2. Here are the odds at DraftKings Sportsbook:

Everyone else is priced above 50/1, and it’s hard to come up with a logical case for any of those long shots.

As the odds suggest, it’s difficult to imagine a Chiefs victory where Mahomes isn’t their standout player. For the 49ers, it’s more wide open. Had there been an MVP named for the NFC championship, it would have been Mostert by a mile (which is approximately how many yards he ran for).

The intriguing pick here is Kittle — who’s actually as high as +2200 at PointsBet. Coming off a quiet game against Green Bay, he seems undervalued, and Kansas City is among the most susceptible defenses in the league when it comes to guarding tight ends. Probably the two best tight ends in all of football are competing in this game. Is it really so crazy to think that Kittle can tally 100-plus receiving yards and a touchdown or two, show up Kelce, and help the Niners prevail while Garoppolo puts up numbers that aren’t so spectacular?

Of course, there are countless other ways to bet this game, from first-TD scored, to the over/under on rushing and receiving yards for various players, to whether there will be overtime or a safety scored. But with nearly two weeks to go until the “NFL championship game” kicks off, there’s plenty of time to explore all of those options.