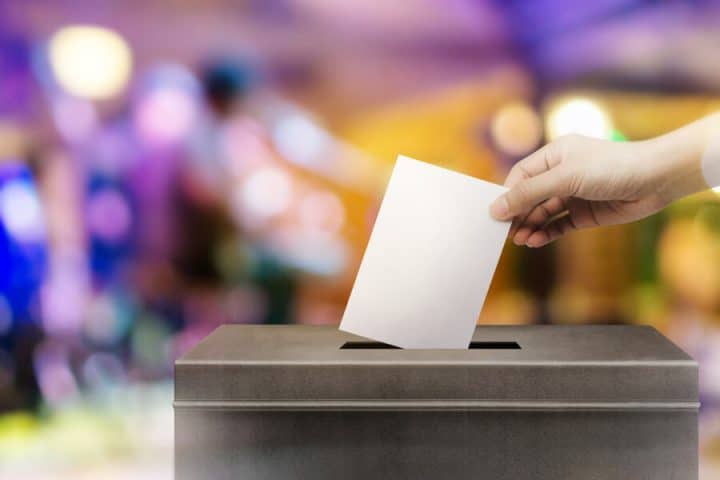 By all accounts, betting on the U.S. presidential election is a popular activity in the regulated UK betting market, as well as through unregulated channels — largely offshore online sportsbooks — that are accessible to Americans. It makes sense, given that it happens once every four years, and the year of the election features increasingly wall-to-wall news coverage of the spectacle, which has been sportified thoroughly, especially since the invention and ubiquitous use of the television.

One could argue the election is like a sport, as it’s equipped with made-for-TV rivalries, consistent score keeping either through polls or primaries, and a candidate’s political jersey matters as much as any policy position — so a regulated betting market is a natural fit. There are also virtually infinite props a sportsbook could offer in the lead up to election day — and some offshore books do take bets on things such as how many times a specific word is spoken at a debate. The illegal market also took bets recently on Democrat candidates speaking some Spanish on the debate stage.

FanDuel, a leading legal sportsbook operator in both the retail and online/mobile settings in the nascent U.S. market, apparently has its eyes on expanding into political gambling, should state officials eventually warm to the idea and the federal concern over the activity abate. Currently, no state allows such a thing to be done legally, not even Nevada, though it’s not an uncommon misconception that Las Vegas casinos allow betting on the POTUS race. Many decades ago, prior to the emergence of trusted public polling, betting on the election basically existed in a legal gray area and was cited by newspapers.

“We would love to offer politics. Frankly, we like to offer games that everybody loves to play. Our parent company, Flutter Entertainment, does a huge business on the Betfair exchange with political betting. So the reality is it’s just a question of: Will it be allowed from a regulatory perspective? We are working on a couple things that might be more free to play, but will certainly tie into the election.”

There’s over a year to go before the 2020 election, and FanDuel anticipates wading into the waters with a test of sorts coming by way of a free-play game. It will be interesting to see what that looks like.

Potential pros for allowing it

The argument for legalizing and regulating betting on NFL games is the same one that could be applied to betting on federal elections. The argument goes as follows: It’s happening on the black market, and if there’s money to be made for legitimate companies and state coffers, it’s better to bring it out of the shadows. That was the crux of the war against PASPA and that 1992 law ended up in the dust bin.

Jimmy Vaccaro, a fixture in Nevada sports betting for more than 40 years, working at the Royal Inn, Barbary Coast, the Mirage, and William Hill US, among other stops, said recently that betting on the election could dwarf other sporting events. He’s actually been saying this for years.

Speaking to CNN in 2015, Vaccaro, who in the past has posted hypothetical election odds, said, “It’d be the biggest thing we’d ever booked. It would make the Super Bowl look like a high school football game.”

There have been conversations in Nevada, dating back just a handful of years, about legalizing election wagering after seeing the kind of business it generates for British books.

Nevada’s sports betting industry took an all-time high $158.5 mm in bets on the 2018 Super Bowl. Nationally, Americans bet about $6 billion on the 2019 Super Bowl, according to research from the American Gaming Association. Most of that came via unregulated, or illicit, channels. State-by-state regulation of sports wagering will bring more and more of that handle into legal hands over time.

For what it’s worth, about 130 mm votes were cast on the 2016 presidential election.

“We’ve been saying for the past 30 years, what is wrong with it? What’s the sense in not being able to do that, since we can book just about everything else?” Vaccaro also told CNN in the lead-up to the 2016 election. “Why send all this money offshore or to illegal bookies when we can regulate it and tax it and everybody can make some money doing it properly?”

Despite the argument for it, Vaccaro said last week he doesn’t think he’ll ever see the day when it’s legal.

i get a lot of why we cant book it. it is a FEDERAL LAW against booking the election it will never get changed in our lifetime trust me sad part is every other country does and has a huge huge huge handle

Another thing to consider is that there’s no cap on money flowing into the presidential race, so the argument that the betting handle could corrupt the process even further is probably a weak one. Regulation, especially with regard to online/mobile platforms, provides the legal industry and states with the ability to closely monitor betting activity and the identify of bettors.

According to Vaccaro, the fan engagement idea that applies to traditional sports could also be the case for election betting — but it’s a weaker argument as the odds of your individual vote making the difference are virtually nil. Those with money on any facet of the election probably would be more likely to tune into coverage, though. So it could, theoretically, make people more informed about the race.

There is a form of wagering on the election that is currently legal under an exception from the U.S. Commodity Futures Trading Commission. The Washington Post in 2016 did a profile on “prediction markets” through one of two betting exchanges currently approved for such activity.

New Zealand-based prediction site PredictIt allows people to make relatively low-stakes ($850 cap) bets, or trades, on a slew of markets (“yes” or “no” questions) surrounding the presidential race. It’s proven to be a great tool for academic researchers. The Post wrote of these traders:

“They sneak peeks at the site during their workdays and check how their shares are doing on their phones at dinner. They’re constantly assessing the latest polls, reading up on candidate strategies and watching for gaffes that could move share prices […] That’s why prediction markets do such a good job at anticipating election outcomes. Polls ask a limited number of voters whom they would vote for today. Prediction markets ask thousands of very informed people to make their best guess at what will actually happen — and to be so confident that they would put their own money on it.”

PredictIt calls itself the “stock market for politics.”

Bloomberg profiled PredictIt in early August of this year:

“Since it went live in late 2014, PredictIt has become the go-to place to gamble on U.S. politics. The site makes it as easy to wager on how many tweets President Trump will send this week as it is to buy a stock on ETrade. Trading volume has been running at about 250 million shares per year, estimates Jon Hartley, an economics writer and researcher, with each share representing a potential payoff of $1 […] PredictIt’s markets are routinely cited by the press as evidence of whom the smart money favors.”

How does PredictIt generate money for itself? The site collects a 10% fee on winnings and a 5% fee on withdrawals from the platform. There is no traditional vig.

Iowa Casino Admissions Flat In August, But Helped By Addition Of Sportsbooks