Baseball’s ‘Crazy’ Hot Stove Is About To Fire Up, Jolting Futures Betting 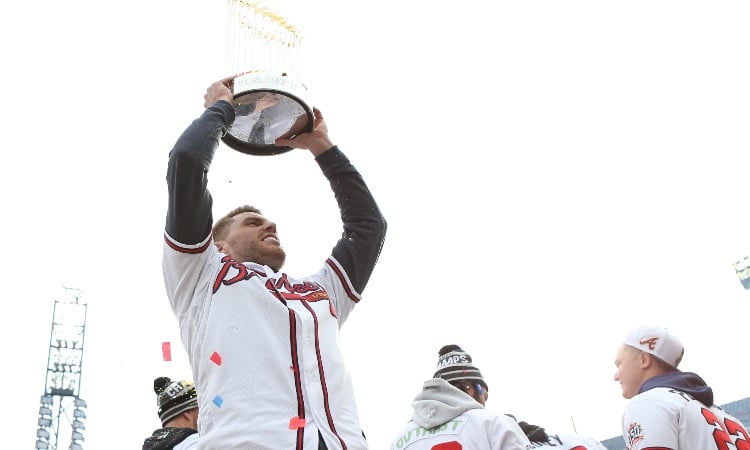 Now that Major League Baseball owners have ended their lockout by agreeing to a new collective-bargaining agreement with their players, they can return to worrying about another threat to their bottom lines: Steve Cohen.

The New York Mets owner, a hedge fund billionaire, was one of the main drivers in baseball’s first burst of hot-stove activity before the lockout began on Dec. 2. He spent $254 million on four free agents, headlined by three-time Cy Young winner Max Scherzer, who should pair nicely with staff ace Jacob deGrom.

Like so many new owners before him, from the Rangers’ Tom Hicks two decades ago to the Angels’ Arte Moreno to the Dodgers’ Mark Walter, Cohen seems intent on investing heavily in his new toy. That always makes veteran owners, some of whom did the same things in their early months, nervous.

Steve Cohen's deep pockets will give the Mets an advantage under the new CBA. https://t.co/HzqFMvCbMN

The combination of Cohen’s aggressiveness and the condensed free agent period left for teams to build their rosters before the season opens on April 7 could fuel an unprecedented burst of signings and trades. Star players such as Carlos Correa, Freddie Freeman, Trevor Story, Nick Castellanos, Clayton Kershaw, and dozens of others remain available to the teams willing to write the biggest checks and accommodate those players’ needs.

Gambling operators scramble to keep up

The transaction wire will capture the attention of one particular group of observers: bookmakers.

The frenzy of activity figures to keep them busy adjusting MLB futures odds just as baseball fans re-engage with the betting markets. March through June typically is the quietest period for baseball transactions as teams are finishing their spring schedules and watching the first months of the season play out before recalibrating at the mid-summer trade deadline. That certainly will not be the case in 2022.

“It’s going to be crazy,” said Caesars Sportsbook Assistant Director of Trading Adam Pullen. “During normal times, everything would be a little more spaced out with the news, but things will be coming fast and furious this year. There will be plenty of big names switching teams in a few amount of days and we have to be ready for it.”

Caesars was among the first books to release odds to win the World Series, posting them on Oct. 21. The Mets opened at +2000. By the time the owners locked the players out six weeks later, the Mets had fallen to +1200 at Caesars. They went from +2000 to +1100 at BetMGM.

The ripple effect of player movement

World Series odds won’t be the only futures prices affected by what could be constant motion in the coming weeks. Many books recently released their over/under totals for individual teams. Those numbers could change daily as players move locales.

“The most challenging thing might not be bumping teams who sign a star, but remembering to drop the squads who were in contention but ultimately miss out on their targets,” said WynnBET senior lead trader Matt Lindeman.

Take Freeman as an example. The Braves’ perennial MVP candidate is reportedly being wooed by MLB’s two wealthiest teams, the Dodgers and Yankees, while staying in touch with the hometown Braves. In the coming days, no doubt other teams will emerge as potential landing spots.

At DraftKings, the Dodgers (+700), Yankees (+900), and reigning champion Braves (+1200) are all among the top eight choices to win the World Series. Wherever Freeman signs will alter all of those teams’ odds, plus, potentially, the odds of teams in the division where Freeman signs.

With baseball fans re-engaging with the sport after labor peace returned on Thursday and as free agency news begins to percolate, wagering activity could ramp up in the early days of April. In the highly competitive world of legal mobile sports wagering, bookmakers will compete to produce the best lines.

Other futures odds — such as which players are likeliest to win awards such as MVP, Cy Young, or Rookie of the Year — also will need to be adjusted based on the usual churn of injury news at spring training camps.

“We expect wagering to increase with the positive news and for most of the action to come in the week leading up to Opening Day,” said BetMGM sports trader Darren Darby.

The end of the lockout has other gambling implications for the game. Namely, it allows baseball to continue cozying up to the industry in order to secure long-term revenue streams. MLB has a partnership deal with DraftKings that includes live game-streaming, and individual teams are free to cut deals with operators. Some already have, and others, like the Yankees and Cardinals, have signaled their interest.

According to The Athletic’s Evan Drellich, players for the first time can begin cutting their own deals with gambling operators, something that would have been strictly forbidden in years past. Some of the high-profile agents will be even busier than bookmakers trying to keep up with the frenzy of activity involving their clients.

One interesting part of negotiations: players now have expanded rights to engage in promotional & endorsement activities with sports betting companies. Was very restricted before, now loosened up. Sports betting before was a matter of league policy—now, been decided by both sides

Baseball’s three-month hibernation is over. Let the craziness begin.