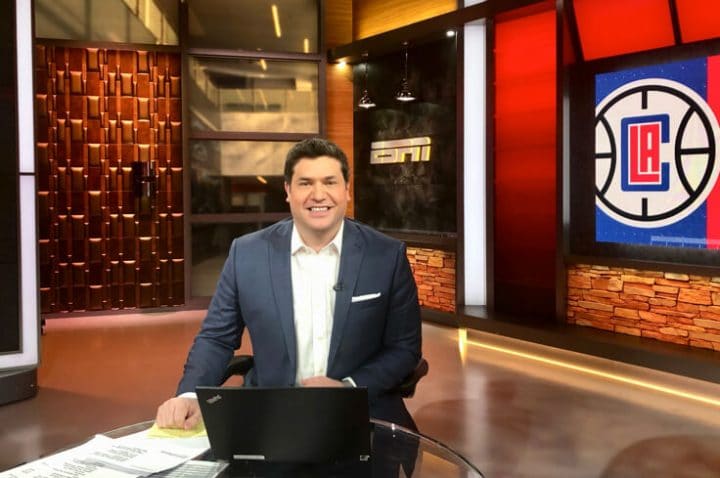 ESPN has dipped quite a few toes into the sports betting content waters, from the “Chalk” vertical on ESPN.com, to a couple of gambling-centric podcasts, to a “Gambling Issue” of ESPN The Magazine, to the popular “Bad Beats” segment when Scott Van Pelt hosts SportsCenter.

Now the sports media monolith is wading in thigh-deep. Next Monday, March 11, ESPNEWS will debut Daily Wager, a studio show focused on the intersection between what happens on the field and what happens at the betting window.

“The basic premise is SportsCenter through the lens of sports betting,” host Doug Kezirian tells US Bets. “We’ll discuss all the major storylines that affect bettors and that affect sports fans. There’s so much overlap between what’s valuable to the regular SportsCenter viewer and also to us on Daily Wager.”

From the Strip to the Mothership

This is familiar territory for Kezirian, who, prior to joining ESPN as a SportsCenter anchor in 2012, spent seven years in Las Vegas, working on air for the local ABC affiliate.

“People would say about Vegas, ‘There’s no pro team there.’ Actually, there is: boxing, UFC, and sports betting,” Kezirian says. “So sports betting became a beat for local sportscasts. I did bad beats on the show, I did all the odds, I went live from the sportsbook, I had pro bettors and oddsmakers on my show all the time. I did picks every night on the 11:00 news, I did picks in the Las Vegas Review-Journal. Sports betting became my beat.”

Kezirian’s interest in sports betting actually dates all the way back to his first $5 bet on the Super Bowl in grade school, but as he says, “it definitely accelerated when I got to Vegas in 2005, and then continued here at ESPN.” In Bristol, Connecticut, he’s distinguished himself as a gambling guy on the weekly podcast Behind the Bets with Doug Kezirian, positioning himself as the logical host for a betting-based TV show once the Supreme Court overturned PASPA and the barriers between sports betting and the public started falling.

Interestingly, Kezirian says a show like Daily Wager has been on ESPN’s radar longer than that.

The launch of Daily Wager marks an important moment in the mainstreaming of sports betting, becoming the first show on an ESPN over-the-air channel to focus on an activity that just two months ago CBS instructed its broadcasters not to mention during the Super Bowl.

“The important thing for us is to just keep doing content that serves the sports fans,” Kezirian says, noting that as far as he knows, there’s been no internal pushback to starting a show built around gambling. “As legalization evolves, as the stigmas erode, there is a demand in the ESPN consumer base for sports betting content. We’re here to deliver that.”

ESPN isn’t the first cable sports outlet to go down this road. Fox Sports 1 beat them to the punch last September with Lock It In, and one takeaway from that experiment was that an hour every day could feel like a lot of time to fill.

Daily Wager is taking on the same challenge, airing live from 6-7 p.m. ET, Monday through Friday. The time slot is no accident. It’s exactly the same time as an ESPN Radio show Kezirian used to host when he was in Vegas, allowing them to handicap games and update lineup news right up until opening tip/puck drop/first pitch.

For hardcore gambling enthusiasts excited to see this sports coverage sector go mainstream, the fact that Daily Wager is on ESPNEWS, not ESPN or ESPN2, could be seen as cause for pause. It’s fair to infer that this is less an all-in move on sports betting by the Worldwide Leader and more a check-call on the flop as the bosses wait to see the turn and river.

With the premiere episode just a few days away, the production team is still fine-tuning the exact format as it engages in rehearsals and test shows.

On-screen graphics will be a major component, with Kezirian saying to expect an “L”-shaped display of odds and information, not unlike the visuals you see during the NFL draft.

While Kezirian directs traffic and pivots to react to breaking news, Daily Wager will also rely for insights and information on its strong supporting cast. Among those who have been announced so far:

One important distinction between Daily Wager and Lock It In: ESPN’s policy is to use lines provided by legal U.S. operators whenever possible. The only times you should expect to see an offshore sportsbook get a plug on the air is when that book is part of a story or is posting odds on something of interest that no regulated U.S. sportsbook is offering.

When speaking at the Sloan Sports Analytics Conference panel on sports gambling last weekend, Kezirian provided insight on the sort of angles Daily Wager will take by using the example of Bryce Harper signing with the Phillies. SportsCenter will report the news and analyze why Harper chose Philadelphia, whether it’s a good contract, and where he’ll bat in the Phillies’ lineup. Daily Wager will discuss how the news impacts the Phillies’ win total, how their postseason and World Series odds are moving, and what prop bets are available on Harper’s season-long stats.

“Even on the slowest day of the sports calendar, during the baseball all-star break for example, you can make NFL future bets, college future bets, baseball future bets,” Kezirian tells US Bets. “There are things to bet on every single day. So, it’s up to me and our producers to figure out the right content each day that fits the appetite of the consumer.”