After Years Of Jostling, FanDuel And Churchill Downs Announce Partnership 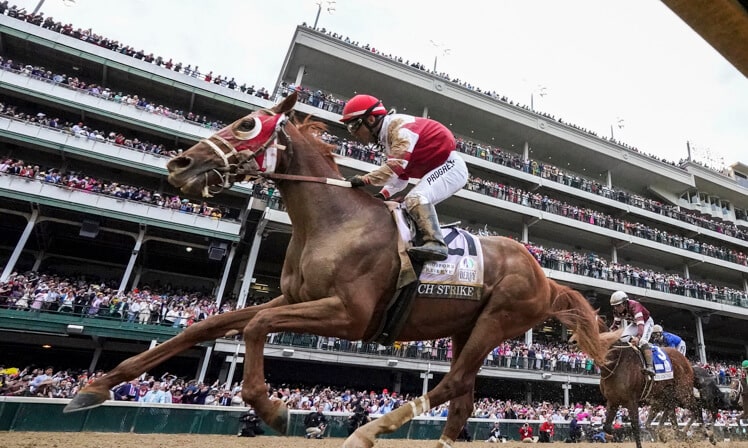 One of horse betting’s icier relationships thawed significantly on Thursday with the announcement that FanDuel and Churchill Downs Inc. had entered into a multi-year partnership that will find the two companies collaborating in the areas of advance deposit wagering, sports betting, and broadcast rights.

For years, CDI and FanDuel’s horse racing subsidiary, TVG, engaged in a pitched battle that often resulted in one rival giving the other short shrift when it came to airing races, offering them on their respective ADW platforms, and even doling out press credentials to the Kentucky Derby. The new partnership appears to have smoothed out whatever rocky terrain existed in the past.

While TVG will, for the time being, continue to be referred to as such in regard to its ADW platform, its televised component was rebranded this week as FanDuel TV. Per a press release detailing the Churchill partnership, “CDI will provide certain technology and services to enable FanDuel’s customers to place parimutuel wagers on horse racing via FanDuel’s sports wagering and ADW platforms. CDI will also authorize wagering on CDI’s owned or controlled horse racing content via FanDuel’s platforms in the United States and grant FanDuel certain television and media rights to broadcast CDI-owned racing content on FanDuel’s television network(s).”

In addition, CDI will grant FanDuel wagering and sponsorship rights to the Kentucky Derby, which had been a sticking point in the past, as the companies’ respective ADW platforms, TwinSpires and TVG, duked it out for market share. With CDI’s recent decision to fold its standalone sports betting operation (also called TwinSpires), the FanDuel alliance will enable it to keep Churchill-affiliated events and products front and center in the eyes and wallets of sports bettors.

“We look forward to working with FanDuel to deliver premium horse racing content to their expansive base of sports wagering customers,” Bill Carstanjen, CEO of CDI, said in the press release. “We are confident that FanDuel’s market approach, teamed with our expertise and technology, will seamlessly deliver horse racing content and pari-mutuel wagering solutions to a significant number of new fans.

“With the launch of FanDuel TV last week and the upcoming integration of premier racing content into our market-leading sportsbook, we believe this is an inflection point in our ability to offer our customers a seamless wagering experience with a single wallet,” added FanDuel CEO Amy Howe. “We are especially pleased that we will be able to offer wagering on the most exciting two minutes in sports, the Kentucky Derby, and that we will have exclusive broadcast rights to the Churchill Downs Incorporated family of tracks on FanDuel TV. We look forward to creating new audiences for horse racing.”

Also on Thursday, the WNBA announced that it had re-upped its partnership with FanDuel, which will continue to be among the league’s official sportsbook and daily fantasy partners.

With the post-TVG FanDuel TV now aspiring to cover a lot more than horse racing, the renewed partnership — which will grant the network access to WNBA footage — comes at a key juncture, as the WNBA Finals are set to get underway Sunday.

“We continue to see increased interest from a broadening fan base in the WNBA,” WNBA Commissioner Cathy Engelbert said in a press release. “Fans are seeking more ways to engage with our game, and FanDuel has been a great partner in growing their offering to meet that demand.”

In conjunction with the announcement, FanDuel reported increases of 270% in bet count and 101% in handle year over year for WNBA betting at its retail locations.