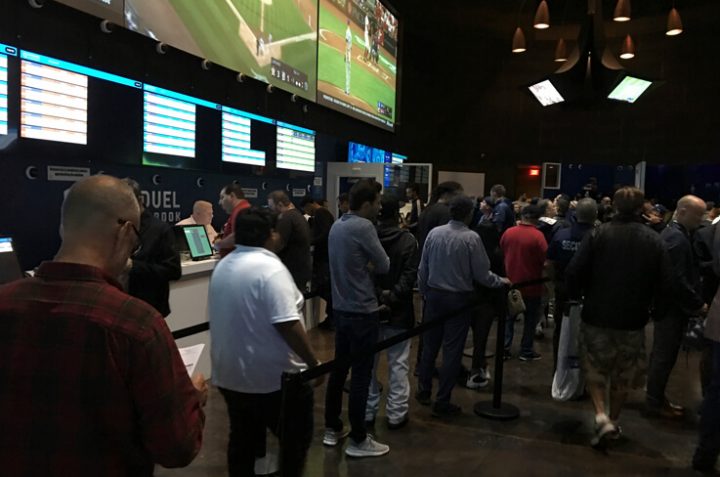 A few hundred Jets fans made their way to the Meadowlands Racetrack’s FanDuel Sportsbook on Monday night to celebrate the dawn of two new eras: the NFL debut of quarterback Sam Darnold, and the first chance to watch a Jets game in a place where you can walk over to a teller and legally place a bet on it.

When the game started, Darnold turned the first play from scrimmage of his career into a Detroit interception for a touchdown.

Things couldn’t get any worse after that.

And they didn’t. They got much, much better — especially for Jets bettors or anyone who took the over, as the local team scored a dominant 48-17 victory.

On my second straight day of visiting the site, I observed that there were perhaps a dozen bettors in line a half-hour before the game and two dozen as kickoff time neared, but it was manageable. Same with the bar area; eventually the seats were filled, but in the early going at least, there weren’t people backed up four or five deep.

Fans entering both the main and auxiliary sportsbooks were offered a flier called “How to Access FanDuel on Game Days.” This is a welcome addition after widespread confusion on this issue before the Giants hosted Jacksonville on Sunday. The line in bold type is key: “you cannot drive to Victory unless you have a parking pass.”

Other nuances in the flier:

The simulcast horse-racing bettors who visit the track seven days a week, 12 hours a day — and have for many years — got to meet their “new neighbors,” the sports bettors. One regular said he would prefer the latter group be segregated on the second floor.

The horse racing regulars — and you’d be amazed at how many date back to the track’s opening in 1976 — for the most part did not say that they would be likely to reallocate their racing funds to chase sports bets. Rather, they see the sportsbook as an extra perk in case they want to mix it up sometimes.

(One long-timer told me how, back in the day, he once lost $200,000 in the stock market in 10 seconds, and added tales of gambling losses, alcohol, getting carjacked and nearly killed, and being broke and depressed. He seemed okay now, but here he was in a simulcasting parlor. “I bet $2 a race,” he said. “It’s entertainment.”)

Three season ticketholders — Eddie Condello of Westwood and Carmine Napolitano and Wilfredo Gil, both of Jersey City — visited the FanDuel Sportsbook on Monday.

“I always hoped [legal sports betting] would happen — but I never thought it would happen,” Gil said.

Condello pointed out that for the past few years, plenty of fans in the stands at Jets game have kept one eye on the game and one eye on their phone to follow their fantasy football team. “They already do that, so this will be business as usual, just with sports bets, too.”

The trio — in their 30s and early 40s — say they will stick to their pre-game tailgating rituals in the stadium parking lots rather than hit the sportsbook. For many their age and younger, the ease of online sports betting on their phones makes more sense than waiting in line on a game day. But for the Jets’ opener, they figured this sportsbook — with dozens of TVs to rival any sports bar in the area — was an appropriate meeting place.

Other odds and ends