NFL Season Is Over — What Now, Sports Bettors?

It's time to take a deep breath and reset, and March Madness will be here before you know it 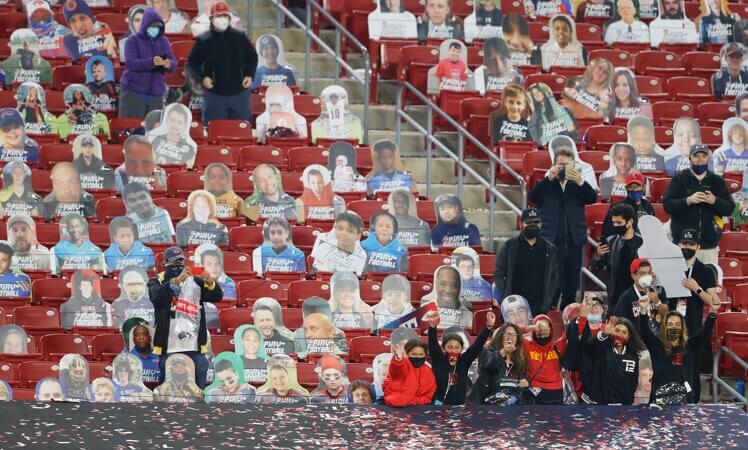 The worst moment of an American sports fan’s year arrived a little earlier than usual in 2021. That’s because the Super Bowl was a blowout, so even though some sweats on bets remained until the final whistle sounded, that miserable feeling of “no more NFL games that count until September” sunk in a few minutes ahead of schedule.

It was a record-setting Super Bowl in terms of sports betting handle, and a major triumph for most sportsbooks — which means it was a losing proposition for most sports bettors (especially those who don’t preside over mattress empires in Houston).

All in all, Super Bowl Sunday was a depressing affair for fans and bettors alike.

But while the next NFL season is some seven months off, the good news is there’s plenty to wager on to tide sports fans over until then. The NFL’s offseason doesn’t have to be an offseason for sports bettors. In this article, we’ll take a look at the biggest potential betting bonanzas on the calendar between now and the next kickoff that counts.

We are now at the start of a six-week lull until the next truly major sporting event, which means the rush we saw for sportsbooks to launch in such states as Virginia and Michigan in January will likely cool for a stretch.

But the next major event on the calendar is a big one. And this year’s NCAA men’s basketball tournament is quite a bit different from years past — and not just because those holdovers still filling out brackets by hand and handing papers to someone in the office will be going online instead.

It will be played entirely in the state of Indiana to limit travel and hopefully lessen the chance of COVID-19 outbreaks. And the traditional Thursday-Sunday format for the first two weeks will be upended, as the “First Four” falls on a Thursday, the 64-team bracket begins play on a Friday, the round of 32 rolls into a Monday, and the Elite Eight plays out on a Monday and a Tuesday.

The finals are scheduled for Monday, April 5, at Lucas Oil Stadium.

The biggest fight on the current MMA calendar is scheduled for UFC 260, a heavyweight rematch between Stipe Miocic and Francis Ngannou. Miocic, who won their first fight by unanimous decision three years ago, is currently a +130 underdog at DraftKings Sportsbook.

While Miocic-Ngannou II is the marquee event among signed fights, there’s something considerably bigger lurking: Khabib Nurmagomedov vs. Georges St-Pierre, which could happen in late summer and threatens to break UFC pay-per-view records.

As of now, MLB is aiming to get in a full 162-game season, and despite the date the league chose for Opening Day, that’s no April Fool’s joke. Where the U.S. will stand in terms of vaccination and herd immunity when the season begins is hard to say, but as an outdoor game in which players never really have to be right up in one another’s faces, optimism for a full season is high.

The defending champion Dodgers, who’ve had another productive offseason, are the clear favorite at FanDuel Sportsbook at +350 to win the World Series again. The Yankees have the shortest odds in the American League.

If it feels like we just watched the Masters three months ago … that’s because we did. The 2020 event was postponed to November, but Augusta National is getting back on schedule this spring, with the first golf major of the year set to run April 8-11.

Dustin Johnson is currently looking at the shortest odds. In fact, that’s true of all four majors. The planned locations and dates of the other three:

Who says you need to wait until September for an NFL event to bet? The draft runs from April 29-May 1, and if Deshaun Watson hasn’t been traded before then, watch out for an especially exciting first few picks.

Unfortunately for some bettors, not all legal sports gambling states permit betting on drafts.

The 2021 Triple Crown is expected to play out in the traditional order, with the “Run for the Roses” slated for the first Saturday in May. It’s too soon to speculate much on the field, but Essential Quality is positioned for now as the potential favorite.

This fight isn’t official yet because Canelo has to get through a gimme on Feb. 27 vs. Avni Yildirim, but after that, boxing’s biggest star (and arguably best pound-for-pound fighter) will look to face a decent challenge in Saunders on the first Saturday after Cinco de Mayo. It’s not quite a “superfight,” but it’s the biggest boxing match penciled into calendars for 2021 at the moment.

A much more lucrative showdown might loom over the summer, however. There’s talk of the clear top two in the heavyweight division, Tyson Fury and Anthony Joshua, nearing a deal for a unification bout. Unfortunately, while a showdown in front of fans at Wembley Stadium between the two Brits could create an Ali-Frazier-like atmosphere, promoters are currently hinting at staging the fight in Saudi Arabia.

Hockey’s “second season” has a target start date of Tuesday, May 11, although COVID cancellations have challenged the likelihood of all 31 teams completing 56 regular season games by then.

Still, May 11 is the aim, and the playoffs will look different this year with each of the four divisions playing down to a winner before the four remaining teams finally compete outside their division for the first time in 2021.

The same caveats apply to the NBA and its hopes of completing 72 regular season games.

Whenever the playoffs do begin, the field will be slightly expanded. In each conference, there will be a play-in round pitting the seventh seed against the 10th seed and the eighth seed against the ninth seed. The teams with the inferior seedings will need to win twice to reach the official playoff bracket, whereas the teams that earned better seeds will only need one win to advance.

Tennis’ first major of the year, the Australian Open, started this week, and bettors can of course keep wagering throughout the tournament. But the next major on the calendar is at Roland Garros, where Rafael Nadal will try to win a fifth straight French Open for the second time in his illustrious career. On the women’s side, Iga Swiatek, who in 2020 became the first Polish player ever to win a Grand Slam singles title, will look to defend.

More eyes will be on Wimbledon, though, since tennis’ most iconic tournament was canceled in 2020 for the first time since World War II. Play is slated to begin at the All England Club on June 28.

Will the Tokyo Olympics, postponed from 2020, actually happen in late summer, bringing athletes from all around the world to Japan? That’s anybody’s guess.

If and when they do happen, these will be the first Olympic Games post-PASPA. So settle in for a loaded sports betting menu for those two weeks.