ESPN's Scott Van Pelt was the biggest name on G2E's sports betting panel, but fireworks between an MLB exec and an AGA exec stole the show. 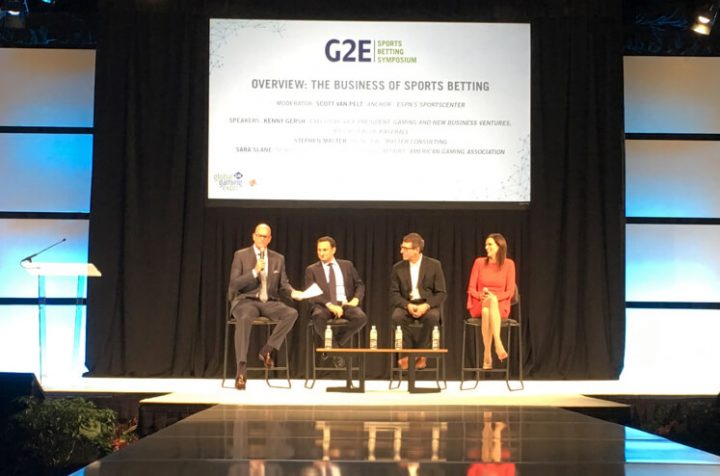 American Gaming Association Senior Vice President of Public Affairs Sara Slane opened up a Global Gaming Expo panel in Las Vegas Wednesday by asking for a round of applause for fellow panelist Kenny Gersh, a Major League Baseball executive vice president, since Gersh was “coming into the lion’s den.”

What Slane didn’t mention was that for the next hour, she would be playing the role of the lion.

In an extraordinarily entertaining and combative — and yes, informative — dialogue, Slane and Gersh each gave as good as they got, illuminating the year-long debate on whether sports leagues should get a slice of the money generated from legalized sports betting in a direct way.

The panel, modestly titled “Overview: The Business of Sports Betting,” was hosted by ESPN TV personality Scott Van Pelt, who earlier had been the featured speaker in an interview conducted by Slane. Van Pelt offered both amusing and serious insights into gambling, but Slane and Gersh ultimately stole the show.

Slane teased Gersh early in the discussion with a “Sorry, Kenny, but … ” in mentioning that financial percentage for the sports leagues that at first was known as an “integrity fee.”

But Gersh later raised the stakes by referring to a different argument the leagues are making: that sportsbooks ought to be paying the leagues for official sports data. He said he has been surprised at the “pushback” that the operators have shown toward the idea, given that the industry is so heavily regulated in every other way.

Enter “some guy in a garage”

Gersh said that when it comes to data, operators say, “‘Yeah, we can just get our data that we’re settling bets on from some guy in a garage who is watching the game on TV. That’s cool, we don’t care if he’s slowing [the data] down, not providing it in near-real time. We don’t need any regulations there.’ That just blows my mind. I don’t understand why [buying official data from the leagues] is not a no-brainer.”

Slane countered with opposition to any sort of mandate that operators must buy the data, while pointing out that MGM has partnered with the NBA for data.

(Left unsaid was that Gersh’s “garage guy” example bears no resemblance to where data has actually come from over Nevada’s sportsbook industry’s decades of experience.)

But it was halfway through the hour that the conversation turned into quite the dance, to use the analogy that kept recurring throughout the discussion.

“There is a lot of misinformation, starting with the name. We don’t call it an integrity fee,” Gersh said in response to a query by Van Pelt. “I’ll call it essentially what it is, which is a royalty. Also, 1 percent [of the total amount wagered] is not anything we’ve been asking for since the very beginning, since we realized that was not the correct amount. So we have been talking about a quarter-point.

“Why do I think a royalty fee makes sense? There are two major reasons why. One is a case of fairness, two is a case of partnership.”

It’s true that MLB and other leagues have backed off from the name and the amount — but to a great extent, the damage has already been done from a public relations standpoint.

“If the Yankees weren’t playing the Red Sox last night, the casinos don’t have that game to offer bets on,” Gersh said. “The leagues, casinos, and sportsbooks all should work together to be successful. If we work together, we’ll increase the handle enough so that [the fee] pays for itself.”

Slane pounced. “You want a cut of the revenue without any of the risk,” she said.

Gersh interrupted and said that legal sports betting already provides risk to league reputations. The gaming industry, Slane countered, spends billions in construction and licensing, yet the leagues would only get the benefits.

Gersh then suggested a twist: “I’d like to structure it in a way that we make money only if the sportsbooks make money. Let’s start with a small revenue share, and if we grow the business together, we’re going to make more money. But the way the laws get passed without that fee, we don’t get the opportunity to do those commercial agreements.”

Slane replied that the leagues will make plenty of money in other ways from increased consumer engagement due to legal sports betting, including increased TV rights charged to companies such as ESPN. Asked about the NFL’s approach, Slane said that the league is pushing for a federal sports betting law — with a “red herring” of mandating a payment by gaming operators for use of official data.

“Interestingly,” Slane added, “the NFL has not been outfront on the integrity issue like —”

“What do I have to do to get her to not call it an ‘integrity fee,’ do you think?” Gersh interjected, in a plea to host Van Pelt.

The first question from the audience was about how states such as New Jersey require financial partners in gambling to be a “vetted gambling entity” — so would the leagues have to go through that same process?

Gersh pooh-poohed the idea, of course. And Slane pounced again, of course.

“If you wanted to have part of the [total amount wagered], wouldn’t you then be required to be a license holder?” she asked.

“We are putting on the games, so I don’t think it’s a good analogy,” Gersh said, dismissing the idea of league commissioners being subject to background checks.

Slane called such an exemption “unprecedented.” Gersh said gambling operators already “have to have faith that the event we are putting on the field has integrity, or you shouldn’t be taking bets on the games.”

Slane brought up the Mafia, and a mildly exasperated Gersh responded, “If the Mafia is running baseball, then don’t take bets on baseball.”

“Where are my stilettos today?” Slane replied, presumably jokingly. (We don’t think she was really looking to kick Gersh.)

Just when it seemed as if this pairing might be wise to take their argumentative show on the road, both struck reconciliatory tones after two subsequent questioners warned that if a truce wasn’t reached in timely fashion, neither side would benefit in the long run.

“Ultimately, we agree on most points about what we are trying to accomplish,” Slane said — combating illegal sports betting among the main areas of consensus. “If we can get on the same page and advocate on a state-by-state basis, everyone is going to benefit. We will continue to have conversations with the leagues, and hopefully we can get there.”

“I agree with Sara,” Gersh said.

Gersh said that while his sport has concerns about maintaining a “family friendly” reputation, it’s also true that “baseball is perfectly set up … for in-play betting on sports. You have at-bats, innings, half-innings, games — each event is a betting opportunity.”

For example, Gersh said, Red Sox outfielder Mookie Betts — seemingly chosen by Gersh unironically and without pun intended — could be wagered on at various odds to get on base, make an out, hit a home run, etc.

Another audience question was why MLB doesn’t seek a cut of gross revenues rather than total amount wagered. Gersh had a sensible response.

The ESPN host, who has been a pioneer in public discussion of sports betting since long before the landmark U.S. sports betting ruling in May, was asked if he had concerns about whether such talk might lure vulnerable viewers into gambling addiction.

Van Pelt replied that all that a viewer would have to do is watch his “Bad Beats” segment, which every Monday shows the excruciating ways in which seemingly winning bets get upended.

On a more serious note, Van Pelt added that he lost a family member to alcoholism, while another has been “30 years sober.” So the question was a welcome one, Van Pelt said.

Slane, who interviewed Van Pelt for this segment, said that the possibility of expanded legal sports betting causing societal ills if safeguards are not implemented on the front end “keeps me up at night.”

Golf is one of the sports Van Pelt specializes in covering, and he made a good argument for why the pace of play in that sport could make it a surprise success in the ranking of legal sports wagering.

Both Van Pelt and Stephen Master — a sports data consultant who literally was in the middle between Slane and Gersh in the later panel — agreed that the vast majority of total growth in U.S. sports betting will come from casual fans. That’s because hardcore bettors long ago found a bookie somewhere to take their action.