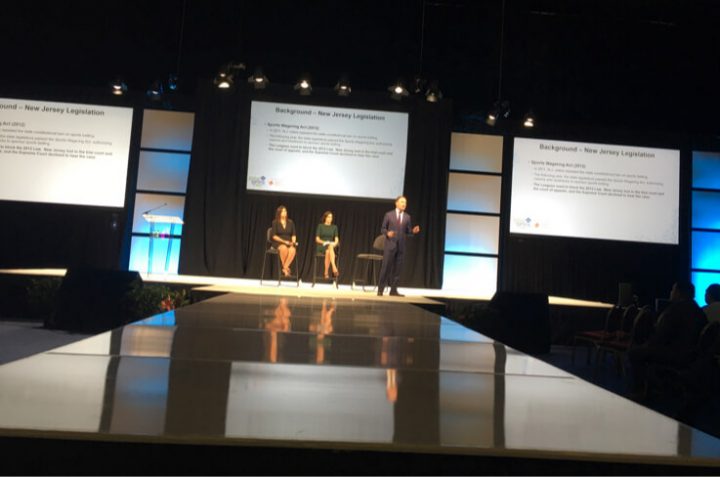 Tuesday’s panel at the Global Gaming Expo in Las Vegas titled, “SCOTUS Decision: What the Ruling Actually Said and What It Means,” included both an American Gaming Association executive and the attorney the AGA hired to work on the long-running sports betting lawsuit that ended in their favor in May.

The panel was an unabashed “victory lap” — but it felt appropriate to take one at this event.

After all, New Jersey’s lead role in getting the U.S. Supreme Court to knock the Professional and Amateur Sports Protection Act of 1992 into the dustbin of history not only ensured expansion of one gambling sector, it might move many states more toward the European model of almost “anything goes.” That could lead to more legalization of such verticals as online casino gaming and online lottery, which to date have only gained modest traction in the U.S.

Attorney Jonathan Cohn noted that while the Supreme Court takes on less than 1 percent of the case petitions that it receives, that figure rises to 12 percent when a significant third party such as AGA files an “amicus” — or friend of the court — brief. When Cohn credited fellow panelist and AGA Senior Vice President of Public Affairs Slane with that idea, the audience applauded.

Cohn increased the pep-rally vibe as he explained that while the top Court traditionally seeks to strike as little of the language from a law it reviews as possible, in this case, “the whole thing was taken down. We won a complete, unadulterated victory.”

Slane’s companion comment to that: “We won the election — now it’s time to govern.”

Where the leagues and states do and don’t align

The major American sports leagues and the states, which have been adversaries throughout much of the legal battle and now the sport betting legalization process, actually have some common ground, Slane said. Among the issues of agreement or potential agreement: shutting down or at least curtailing illegal markets, promoting responsible gambling, ensuring the integrity of the game (and the bet) in the eyes of the public, and the opportunities arising from mobile betting.

Then again, the leagues want access to casino information on the betting, a sliver of the action in the form of some sort of a fee, and veto power over types of bets that they don’t like.

Slane said the latter could work as a reprise of Nevada’s compromise: Leagues can ask regulators to ban certain types of bets, and if the regulators agree, those bets are not offered at casinos.

As the discussion continued on, Slane played a clip from last month’s U.S. House of Representatives hearing that happened to be the lead of the story US Bets wrote about the hearing: Wisconsin Rep. Jim Sensenbrenner wrapping up the rambling hearing on federal oversight of sports betting by concluding that all parties agree that “the worst thing that Congress could do is nothing.”

“For whatever the reason, at that point in time my microphone didn’t work because I wanted to say, ‘No, we don’t all agree that Congress needs to get involved,'” Slane clarified at G2E.

Meanwhile, Cohn said the Supreme Court’s finding that PASPA violated the 10th Amendment (regarding states’ rights) has raised the hopes of one group questioning whether a state must share immigration information with the federal government, with a similar issue being raised in another case regarding drug enforcement information.

A couple of people in Las Vegas who know I covered the entire nine-year New Jersey sports betting saga teased me that I couldn’t possibly learn anything by attending this panel.

Until Tuesday, while I knew that Montana was among a handful of states grandfathered in when PASPA was made law a quarter-century ago, I never heard mention of the state doing anything about it (as opposed to Delaware, which almost a decade ago revived its NFL sports betting parlay cards from the mid-1970s).

But Cohn noted that Montana permits betting on pigs, gerbils, and hamsters “outside the city limits.”

Sure enough, here is one of the regulations. Better still is this Billings Gazette story from 2008 on pig betting that includes the phrase, “But indoor gerbil and hamster racing never caught on the way running pigs did.”