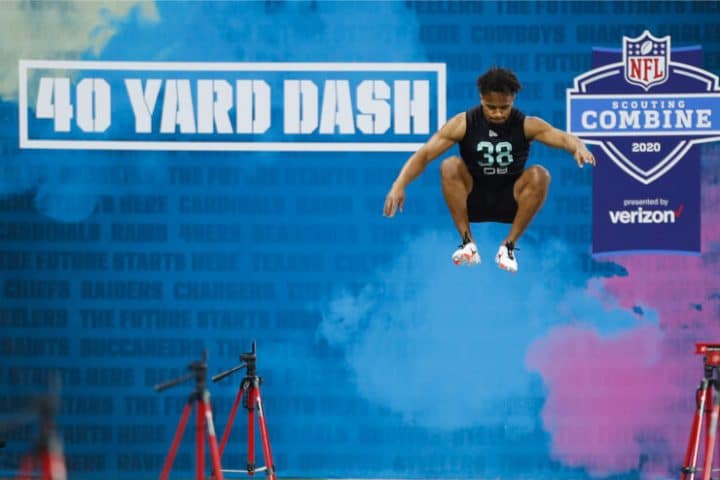 It was the ’90s pop-rock band Soul Asylum that sang the lyrics, “Trying to do the right thing, play it straight / The right thing changes from state to state.”

Frontman Dave Pirner presumably didn’t have legalized sports betting in mind when he wrote those words, but they do apply to this rapidly expanding sector of the gambling industry. The rules for what you can and can’t bet are, literally and figuratively, all over the map.

In any state in which you can legally place sports wagers (Illinois brought that total to 15 on Monday), there are plenty of sports and types of bets that are universally available. Football, basketball, baseball, hockey, golf, tennis, and on and on. Point spreads, moneylines, and totals. If you wander into any sportsbook anywhere, you don’t have to ask, “Do you allow betting on the point total in an NFL game?”

But there are also gray areas. There are sports and sports-adjacent markets that are available in some states but not others, or that aren’t available in any states now but might be in the future.

Here’s a look at some of the more intriguing markets about which the average American is unlikely to know the particulars of legality:

It’s called “sports gambling,” and the coin toss at the start of the Super Bowl fits one of those two words perfectly. Flipping a small disc in the air is in no way a sport. But guessing which side it will land on is the most pure, basic form of gambling there is.

It might surprise the uninformed to learn that American sportsbooks and legislators that approve betting markets do not consider this a gray area. Betting on the Super Bowl coin toss is allowed in every sports gambling state. (At least so far; the throbbing headache that is Tennessee’s attempt to write sports betting rules makes that state a potential holdout.)

And betting on the coin flip generates a stunning amount of action, despite the fact that any vig at all makes it an obvious negative-EV play.

New Jersey says its rules allow for Super Bowl prop bets on activities determined on the field of play. But that’s not a straightforward stipulation to interpret. The coin toss, which you can bet on, takes place on the field. The singing of the National Anthem, the length of which you can’t bet on legally in the U.S., also takes place on the field. And the traditional dumping of the Gatorade bucket, which can you bet on in New Jersey and Indiana but not any other states, can take place either on the field or on the sidelines.

Why is this betting market allowed when (a) inside information is theoretically available, as the color of the Gatorade to be dumped is typically determined in advance; and (b) the result might be open to interpretation, as it could be debatable whether the watered-down liquid was more orange than red, or more yellow than clear?

It’s mystifying. But this is a prop you can bet — at low limits — in a couple of states.

Wouldn’t it be fun to bet, if only at modest limits, on how fast a player’s 40 time will be, who will have the highest vertical jump, or whether anyone will bang out over 38.5 bench press reps?

If sportsbooks allow bets on exhibitions such as all-star games and three-point shooting contests, they ought to allow props on individual performances during the NFL Scouting Combine. But to this point, no such markets are allowed in any state.

It’s a shame. There’s no good reason we shouldn’t have been able to sweat the bench press performance of the Arizona State punter with arms “like logs.”

It’s hard to fathom why it wouldn’t be OK to bet on a player’s combine performance but it’s just fine to bet on when he’ll be taken in a pro sports league’s draft, but here we are.

Despite the fact that people connected to league GMs could potentially know for a fact who the first or second pick in a draft will be, you can go on any online sportsbook right now and lay a big number on Joe Burrow to go first in April. And as the date draws nearer, there will be props galore, such as over/unders for the draft positions of individual players or number of players from a given school or conference taken in a given round.

The potential to compromise college sports, however, has been a talking point throughout the sports betting legalization process, and in a couple of states, legislators and regulators have reacted by limiting the impact of the individual college player. So far, Pennsylvania is the only state to outlaw college player props. But Virginia, should the bill it passed over the weekend be signed by the governor, will soon become the second.

Of all the things bettors have been able to risk money on legally since the fall of PASPA, perhaps the most surprising is the awards shows such as the Oscars and Emmys. There’s inherent risk for sportsbooks in offering any market in which the outcomes are voted on and known — if only to a small number of people — in advance. But New Jersey has offered both Oscars and Emmys betting, and the Indiana Gaming Commission followed suit for the most recent Academy Awards.

Nevada remains a holdout, with oddsmakers sometimes releasing lines, but only “for entertainment purposes.”

Daily fantasy contests for League of Legends have been available in the U.S. dating back to 2015, but the non-fantasy-style sports wagering side of things has proven more hesitant about dipping that first toe in.

New Jersey gave it a shot with a one-time authorization for the LoL World Championship Finals last November, with a $1,000 betting limit and no in-game wagering. Assemblyman Ralph Caputo is now pushing for wider eSports betting legalization in New Jersey, but with $100 limits.

No other states have followed NJ’s lead yet. The reality that many eSports competitors are not merely under 21 but under 18 appears a complicating factor for some regulators.

Millions of Americans probably feel like they have enough skin in the game entering the November 2020 election as is, but if you’re looking to add to the sweat … sorry to say no sportsbooks in the U.S. allow wagering on politics.

Election betting is legal throughout much of Europe, and British political gambling expert Paul Krishnamurty recently told the Gamble On podcast that he wouldn’t be surprised if some U.S. sportsbooks have it by 2024.

For now, though, when it comes to elections, America is all about bettor suppression.