Already running in Rockford, Hard Rock is trying to play both sides of the Illinois-Wisconsin border 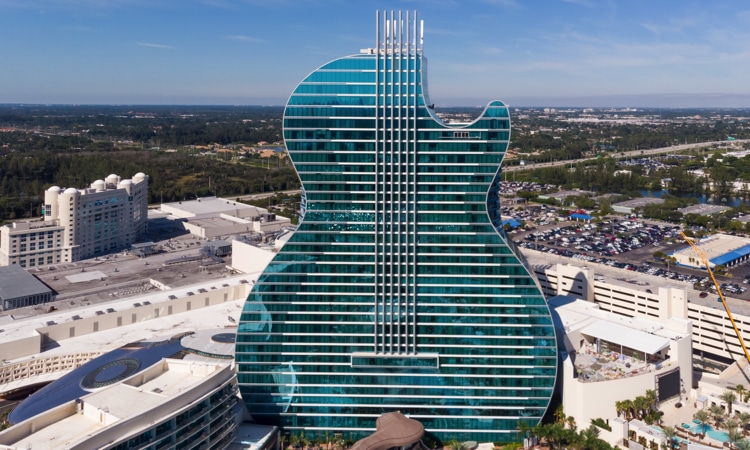 Hard Rock International is teaming up with the Menominee Indian Tribe of Wisconsin to potentially bring a casino to southeastern Wisconsin near the Illinois state line.

The two groups announced their partnership last week, with the goal of opening a casino in Kenosha. The Menominee Tribe previously attempted to open an off-reservation casino at the Dairyland Greyhound Park dog track in 2015, but the petition was rejected by then-Wisconsin Gov. Scott Walker in large part because it would have required the state to refund payments the Potawatomi Tribe — which currently operates a casino in Milwaukee, 40 miles to the north of Kenosha — should the Kenosha casino have opened.

A tribal-run casino in Kenosha requires approval from the city, Kenosha County, the U.S. Bureau of Indian Affairs, and the U.S. Department of the Interior, along with the governor of Wisconsin.

“Hard Rock has a longstanding partnership with the Menominee Tribe and is proud to support them in their
continued efforts to bring a world-class gaming and entertainment resort to the Kenosha community,” Hard
Rock International COO Jon Lucas said in a joint statement with Menominee Chairman Ronald J. Corn, Sr.

Last week, the Village of Bristol unanimously voted to sell a 60-acre parcel of land it owned in the city of Kenosha to an affiliate of Hard Rock International for $15.2 million, according to the Kenosha News. The parcel is located just west of Interstate 94 and less than 10 miles from the Wisconsin-Illinois border.

On the Illinois side of the border, Full House Resorts is currently constructing a temporary casino in Waukegan — The Temporary by American Place — that is expected to open this fall ahead of work on a permanent venue. That venue, located less than 20 miles south of Kenosha, is expected to have approximately 1,000 slot machines, 50 table games, and retail sports wagering via Circa Sportsbook.

Hard Rock playing both sides of the border

Hard Rock already has a stake on the Illinois side of the Wisconsin border, with its temporary casino in Rockford up and running 90 miles west of Kenosha. That venue has been operational since last November, and its permanent casino there will eventually compete with one 20 miles to the north and over the state line in Beloit, where the Ho-Chunk Tribe received approval from Wisconsin Gov. Tony Evers in May to build a $400 million casino expected to open in late 2023.

The proposed Kenosha casino would be on a smaller scale than the one envisioned by the Menominee Tribe in 2015, reflecting the realities of gaming expansion on both sides of the state line.

“The proposed project will not be as big as it was previously envisioned, but it will still create jobs and be substantial,” Corn said. “It will still be a Hard Rock brand and be an incredible addition to the community, the local and regional economy, and the state. Much has changed since our 2015 effort, but the needs of our tribe and its members have continued and in some cases grown more acute.

“We need to make greater investments into health care for our children and elders; we need to make more investments into educating our young people; and we need to do more to reduce the high levels of poverty, hunger, and unemployment on our reservation. A casino and entertainment center in the City of Kenosha is the best path for our tribe to obtain the resources to help achieve those important goals.”

If the Kenosha casino does open, it would give Hard Rock a bracket of Chicago despite those venues not being in Illinois. The company opened Hard Rock Northern Indiana in Gary in May 2021, and that venue has quickly become Indiana’s top revenue generator among the state’s 10 casinos and two racinos. Hard Rock was also among three finalists for Chicago’s downtown casino license, but lost out to Bally’s in early May.