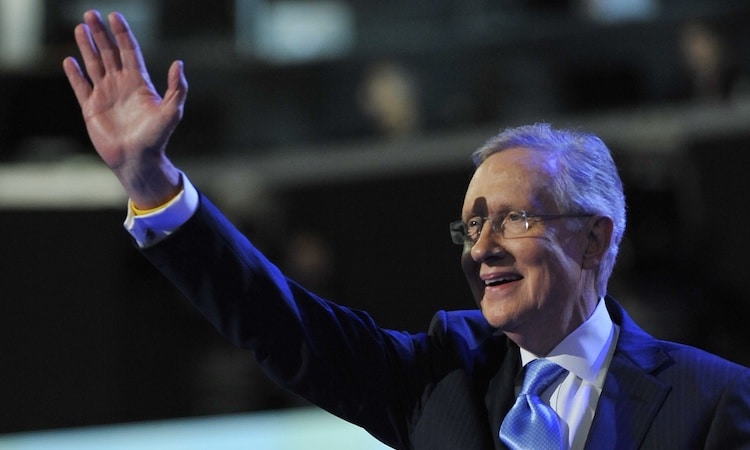 Harry Reid’s death Dec. 28 inspired many tributes and recollections in media across the country, as would be expected from a national figure who served in the U.S. Senate’s Democratic leadership for decades, and most centered around his time spent in Washington, D.C.

In the smaller world of American gaming, however, he also played a significant role, albeit with different hats over the years.

From his time as the chairman of the Nevada Gaming Commission (NGC) to his years in the Senate, his impact on the industry, specifically in his home state of Nevada, was considerable.

“Senator Reid’s impact on Nevada and the gaming industry is unparalleled,” American Gaming Association President and CEO Bill Miller said in a statement. “He was the ultimate gaming champion.”

‘I thought I knew everything about the state of Nevada’

The mid-1970s were not kind to Reid, politically.

After four years as the lieutenant governor of Nevada, Reid lost two straight elections — first for a U.S. Senate seat, and then for mayor of Las Vegas. That led Gov. Mike O’Callaghan to appoint Reid as chairman for the NGC.

“I can say this with a small amount of authority, because I knew Governor O’Callaghan quite well,” said Geoff Schumacher, a historian, former journalist, and current vice president of exhibits and programs at the Mob Museum in Las Vegas. “He had a longtime friendship with Harry Reid. At that time, [Reid] had lost a couple elections, his political career was in freefall, and this was an opportunity to help Harry out. But Harry was also a valuable asset, because of his incorruptibility.”

Part of that incorruptibility may have come from Reid’s naivete, as he explained in a 2016 interview with the Mob Museum.

But he learned quickly, as Reid’s time with the NGC (1977-1981) was fraught with controversy and danger. He was at the center of clashes with the mob influences in Nevada gaming and was part of a regulatory movement in the state that had the target of getting organized crime out.

“He was chairman of the [NGC] at a pretty critical time in Nevada history,” said Anthony Cabot, a former gaming attorney who now teaches at UNLV’s Boyd School of Law. “From the mid-’60s to the early 1980s, Nevada was in the process of cleansing the industry of the remnants of organized crime. Before the 1960s, there were very little efforts to keep organized crime out of Nevada.

“But it was a gradual process. Once organized crime had licenses, it was very hard to get rid of them. [By Reid’s time], it was the end of the end. There were still remnants [of the mob], the Stardust being one of the bigger examples, but that time set the stage for the corporate era we know today.”

Reid famously clashed with Frank “Lefty” Rosenthal, and one of those moments was fictionalized during a key scene of the movie Casino, where Robert De Niro (playing Sam Rothstein, in the mold of Rosenthal) lambasts the NGC chairman (in the mold of Reid).

The scene was fairly close to what happened in reality, according to Schumacher, based on an actual hearing where Rosenthal could not secure a gaming license.

“Casino is remarkably appropriate in its depiction of that era,” Schumacher said. “The look and feel, the vibe, the way people spoke, the way people acted — it was very much in keeping with how people really were, which is more than you can say for most Hollywood depictions.

“It was neutral on Reid, which was the right way to go. Reid was not a big part of the movie, but that was a pivotal point, where Lefty Rosenthal goes nuts and accuses [Reid] of taking favors.”

During the 2016 interview with the Mob Museum, Reid said Rosenthal “was one of the few people in the world that I was actually afraid of. Not of him, physically, but what he could do. Because I thought he was a killer.” In 1981, Reid’s wife, Landra, found a bomb under the family car.

“People tried to bribe me. They were arrested by the FBI. They went to prison,” Reid said during his interview with the Mob Museum. “My wife found a bomb on our car, with the kids in it. I wasn’t in the car. We got death threats. I got death threats. [We] had to clear out my law office on more than one occasion. We had to cover our picture windows where I lived. I carried a gun until I went back to Washington.”

Although FBI wiretaps caught organized crime figures claiming Reid was under their control during that time, investigations cleared him of wrongdoing. While Reid cannot be solely credited with getting rid of organized crime’s influence in Las Vegas, he played an important part at an integral time.

“If there had not been that effort, one of two things would have happened,” Schumacher said. “The federal government would have taken a much greater role in Las Vegas, and that would not have been good for Las Vegas. It would have hurt the economy and shut down casinos. But when the state started taking it seriously, that was very good for Nevada.

“The mob would have also had its role in the casino industry for a longer period of time, probably into the ’90s. The writing was on the wall into the ’80s that Vegas was destined to become a much larger place, and the mob was priced out of the market. No mob family could spend a billion dollars to build a resort. Only corporate America could.”

Although Reid moved on to the U.S. House of Representatives in 1982 and to the Senate in 1987, he continued to be an influence in the gaming world, although it wasn’t as hands-on as his time with the NGC.

In 2000, he blocked an attempt by Sen. John McCain to ban betting on NCAA sports at Nevada casinos. In 2010, after years of opposing online gambling, he tried to legalize online poker. In 2015, he spoke out about daily fantasy sports, when it was not explicitly considered gambling in most jurisdictions.

But there aren’t that many examples of pro-gaming moves during his time in the House and Senate, because he often interceded before bills and potential issues that would have harmed Nevada gaming interests became news, according to Cabot.

“He was instrumental in protecting Nevada casinos’ interest in D.C.,” Cabot said. “The McCain move to ban wagering on amateur games — that was the pinnacle of what Senator Reid did for the industry. He made sure any legislation in opposition to the Nevada casinos’ interest was effectively dealt with. That was critical for the casino industry. At the time, the casino industry was against internet gambling, which resulted in the Unlawful Internet Gambling Enforcement Act.

“The value of having Reid in D.C. was that he was able to block legislation that was antithetical to the interest of Nevada casinos. It wasn’t always public, because it never got anywhere.”

As the Las Vegas Review-Journal reported the day after Reid’s death, during the trying times of the Great Recession, he helped save the CityCenter development on the Las Vegas Strip.

According to the report, Reid and fellow Sen. John Ensign “called CEOs and other top officials at banks and asked them to consider loans for CityCenter” in 2009.

The complex, which was developed by MGM International and cost between $8-10 billion, depending on the source, features the Aria Resort & Casino, other hotels and condos, and retail and entertainment spaces.

“Nevada’s economy avoided collapse under the weight of the 2008 financial crisis,” MGM President and CEO Bill Hornbuckle said in the Review-Journal piece. “Words can’t begin to describe the monumental impact Senator Harry Reid had on Nevada, our country, and our industry.”