Outside some early success at Monmouth Park, the industry has struggled to bring major horse races and sports betting windows together. 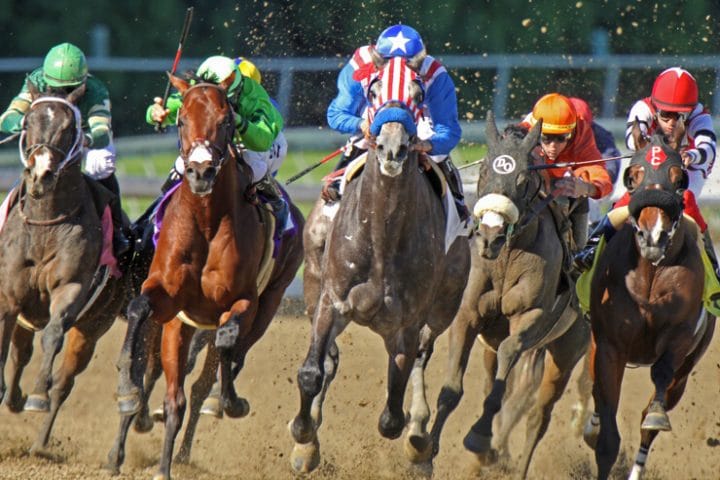 For the first time in the 148-year history of Monmouth Park, the racetrack in Oceanport, New Jersey opened its doors on Thanksgiving Day for simulcast racing.

That was just one of several recent positive signs at the venerable track near the Jersey Shore.

It’s been less than a year since the Garden State welcomed legalized sports betting, and Monmouth officials have credited the activity for bolstering nighttime handle and simulcast revenue. On top of that, last week Gov. Phil Murphy approved a measure that will grant $20 million in subsidies to the horse racing industry this year (and theoretically over the next five years), half of which will be earmarked for annual purse increases at Monmouth Park.

Despite the positive momentum in New Jersey, the long-term outlook for how the thoroughbred industry plans to monetize sports betting remains unclear.

State of the states

Each year, Parx hosts the $1 million Pennsylvania Derby, while Mountaineer is home to the $500,000 West Virginia. Both races are among the most lucrative on the racing calendar for 3-year-old thoroughbreds nationwide.

Despite those advances in a handful of states, the thoroughbred industry has expressed little optimism that a major racing state will offer sports betting at a Triple Crown race or the Breeders Cup World Championships any time in the near future.

Although there is active sports gambling legislation in Kentucky, Maryland, and New York — the three states that host Triple Crown races — there are issues that could prevent some of the nation’s most historic racetracks from opening sports betting windows during the marquee events.

In New York, sports gambling could be limited to four existing upstate casinos —Tioga Downs in Tioga County, Resorts World Catskills in Sullivan County, Rivers Casino in Schenectady County, and del Lago in Seneca County — if the activity is legalized at some point in 2019. While a section in New York’s 2013 Racing, Pari-Mutuel Wagering and Breeding Law authorized the casinos to begin accepting sports wagers, the provision does not apply to any of the state’s three major racetracks: Aqueduct Racetrack, Saratoga Race Course, and Belmont Park, the home of the third jewel of the Triple Crown.

Much like Monmouth Park, patrons at New York tracks could be intrigued by the possibility of placing sports wagers on their mobile devices while their horses load into the gate. A set of sports betting regulations approved by the New York Gaming Commission last month, however, did not include any guidelines on mobile sports betting.

Shortly after the meeting, a spokesman for New York Gov. Andrew Cuomo said the office believes that a constitutional amendment will be required to approve mobile sports gambling throughout the state. A constitutional change in New York needs to be passed by two consecutive legislatures before it appears on a ballot referendum the next November.

By the same token, a constitutional amendment may be necessary in Maryland to approve sports gambling. If Maryland decides to take such a route, sports betting might not be offered at The Preakness until 2021.

The prospects for sports betting at famed Churchill Downs by the end of 2019 also appear dim. Alex Waldrop, who serves as CEO of the National Thoroughbred Racing Association (NTRA), is skeptical of Kentucky’s ability to approve full-scale sports betting given the state’s large conservative base. Waldrop points to to several unsuccessful efforts to bring casino gambling to the state in the past.

“I don’t see a major racing state having sports betting on the track in the next two years,” Waldrop said.

Sports betting initiatives in two others, Florida and California, have been met with resistance from the tribal gaming community. When Santa Anita Park hosts the Breeders Cup in November it will mark the sixth time the world championships will return to a California racetrack over a span of eight years. Since 2017, Gulfstream Park in Florida has served as the home of the Pegasus World Cup, the world’s second-richest thoroughbred race.

And while as many as 10 states with elite thoroughbred racing could add legalized sports betting this year, most stand little chance of holding a championship event like the Breeders Cup, Waldrop said.

The approved subsidies could have a dramatic effect on the quality of racing at Monmouth. The summer meet in 2019 will increase to 61 days, up from 52 a year earlier. At the same time, the average daily purse is expected to spike by more than $150,000 to about $500,000 per racing card.

Monmouth will also continue to receive revenue from the William Hill Sports Bar located inside the first floor grandstand. Since its opening last summer, William Hill exceeded the facility’s expectations for revenue derived from sports betting, according to Brian Skirka, a marketing manager with Monmouth Park.

Skirka was unable to disclose the parameters of the track’s revenue sharing agreement with the gaming operator.

Last July, the New Jersey Division of Gaming Enforcement approved a four-team, cross-sport parlay offered at Monmouth on Haskell Day. The contest featured three stakes races, including the $1 million betfair.com Haskell Invitational, along with a win bet on a Major League Baseball contest between the Chicago Cubs and St. Louis Cardinals.

As with normal multi-team parlays, a bettor needed to hit all four legs of the wager to collect a winning ticket. There is a strong possibility that Monmouth could design additional cross-sport contests for the 2019 summer meet, Skirka added.

Skirka made the comments earlier this month at the 2019 National Horseplayers Contest in Las Vegas. As Skirka conducted an interview in a hallway at the Treasure Island Las Vegas, Chris Fallica intently studied a racing form inside a nearby ballroom.

Fallica, a college football researcher for ESPN’s College GameDay, hit a 50/1 longshot on Day 2 of the nation’s most prestigious handicapping tournament, en route to a spot in the semifinals. Fallica finished the three-day event in 57th place out of 668 entries, earning winnings of $5,000.

Moving forward, Fallica would be in favor of a joint event that combined a player’s handicapping and sports betting skills into one contest. Weeks before that Las Vegas event, DraftKings doled out $2.5 million in prizes during its inaugural Sports Betting National Championship.

“I think there would be a big appetite for it. We’re not just horse players, the majority of us are sports bettors as well,” Fallica said. “I think it would be something that would be very appealing to me, as a horse player, knowing that we have a chance for a big score with horse racing, as well as sports.”

One of the next steps for the industry, according to Waldrop, is to develop a common wallet that will enable patrons to place wagers on horse racing and other sports from the same app. Currently, a horse racing fan can bet on a trifecta on TVG’s mobile device, but not on, say, Bryce Harper’s home run total. The fan can also wager on baseball at William Hill, but is unable to bet on a horse race at Monmouth on the same app.

Monmouth is in the early stages of developing player-tracking technology that could load a bettor’s information onto a single wallet. Once completed, a player’s personal information will be stored on the same account, similar to a process used by The Stars Group for online poker and sports betting.

“Everything we do in terms of sports betting is to benefit horse racing,” Skirka said.